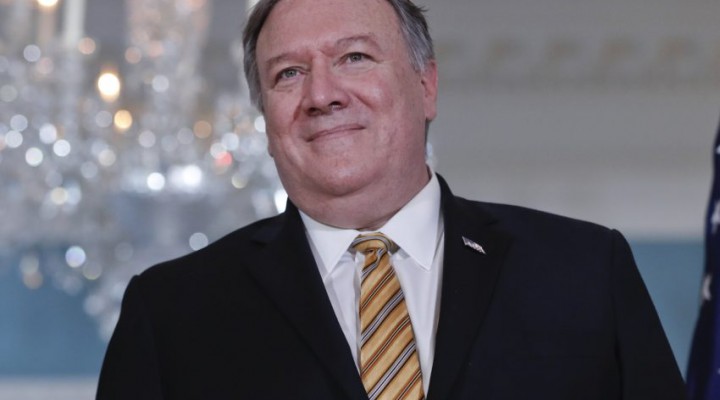 “People don’t recognize that Hezbollah has active cells — the Iranians are impacting the people of Venezuela and throughout South America. We have an obligation to take down that risk for America and [what we’ll talk about is] how we do that in South America and all across the globe.” — Mike Pompeo

During a Wednesday night interview with FOX Business host Trish Regan, Secretary of State Mike Pompeo made several statements that raised eyebrows, such as claiming that Cuba had invaded Venezuela and “taken control” of the Venezuela’s “security apparatus” and that U.S. sanctions illegally imposed on Venezuela “aren’t aimed at the Venezuelan people.”

However, the most surprising claim Pompeo made in the interview was that Hezbollah and Iran were “active” in Venezuela, presenting a national security “risk for America.”

People don’t recognize that Hezbollah has active cells — the Iranians are impacting the people of Venezuela and throughout South America. We have an obligation to take down that risk for America and part of what we will talk about next week in Warsaw is certainly how we do that in South America and all across the globe.”

Pompeo’s mention of Hezbollah — a political party that has wide support in Lebanon’s democracy — has been noted by many outlets for seemingly providing a justification for the U.S.’ “obligation” to intervene in Venezuela, potentially with military force, by attempting to link the Venezuelan government to the U.S.’ Middle Eastern enemies. What has been entirely overlooked, however, is the fact that Pompeo also signaled a promise of military intervention “all across the globe.”

Indeed, if the U.S. intervenes in Venezuela with Hezbollah as the pretext, it sets a precedent for going to war where Hezbollah is actually located — Lebanon — as well as against Hezbollah’s most powerful regional ally and favorite Trump-era boogeyman, Iran.

A whole doctrine out of whole cloth

Pompeo’s suggestion that Hezbollah is “active” in Venezuela has slowly become a Trump administration talking point over the course of the past two years, largely due to the influence of Pompeo — who publicly made the claim in August 2017 — himself and National Security Adviser John Bolton.

Bolton helped to bolster the claim that Venezuela’s government is connected to Hezbollah, through his connections to the Gatestone Institute, which Bolton chaired from 2013 to 2018 and used to heavily promote the alleged Hezbollah-Venezuela link over that time frame. Bolton, as recently as last January, argued that “Hezbollah, exploiting the long history of expatriate Middle Eastern trading networks in Latin America, remains a murky but continuing threat” in Venezuela, providing no evidence to back up his claim beyond suggesting that Middle Eastern immigrants to Venezuela are indicative of a Hezbollah presence.

Claims of Hezbollah’s links to Venezuela largely revolve around one man, former Venezuelan Vice President Tarek Al Aissami, who is of Lebanon-Syrian ancestry. The claims have been promoted as fact – despite an absence of concrete evidence – by a mix of neoconservative think tanks, such as the Center for a Secure Free Society, and former Bush officials, such as Roger Noriega, along with the Bolton and AIPAC-linked Gatestone Institute.

Similarly, many of these same groups, particularly John Bolton, have been instrumental in asserting that Iran – a strategic ally of Chavista Venezuela –is not in Venezuela for any “normal” alliance but in order to provide cover for alleged illicit activities, including its alleged ambitions to build a nuclear bomb. Bolton has accused Venezuela of harboring and collaborating with Iranian criminals and “smugglers;” and, during a 2013 hearing, Bolton claimed that Iran was operating in Venezuela in order to avoid international scrutiny:

These are expert smugglers with — the largest Iranian diplomatic facility in the world is in Caracas, Venezuela […] they are laundering their money through the Venezuelan banks.”

Bolton has also asserted that Iran uses Venezuela “to retain access to the country’s extensive uranium reserves,” suggesting that Venezuela is connected to Iran’s alleged desire to acquire and develop nuclear weapons. However, independent scientists have long countered that Venezuelan uranium deposits are minimal and likely impractical to extract.

Yet, that didn’t stop the usual pro-intervention think tanks — such as the Center for a Secure Free Society and the Center for Strategic and International Studies, whose board of trusteesincludes Henry Kissinger, ExxonMobil CEO Darren Woods and notorious neoconservative Richard Armitage — from promoting the claim.

Notably, no concrete evidence of either an illicit Hezbollah-Venezuela or an Iran-Venezuela connection has ever emerged beyond innuendo made by individuals and organizations with a vested interest in demonizing anti-imperialist governments in Latin America and beyond.

While the lack of evidence should be enough to write off this claim, it is still regurgitated by Trump officials and pro-interventionists because it offers a “terror threat” justification for U.S. meddling and potentially U.S. military intervention in Venezuela, as Hezbollah is considered a terror group by the United States.

Indeed, the potential for U.S. military intervention in Venezuela in order to “support” the parallel government of the U.S.-backed Juan Guaidó has been repeatedly mentioned by top Trump officials, including Trump himself in recent days. With Hezbollah and Iran thrown into the mix, the Trump administration is seeking to link its aggressive Middle East policy with its aggressive Venezuela policy in order to justify intervention in Venezuela because it is in “our hemisphere,” as Pompeo stated during his recent interview.

However, given the attempt to establish this link between Venezuela and Hezbollah/Iran, it must be understood that this is a connection that the Trump administration will seek to use in both directions. Indeed, if the U.S. succeeds in deposing the current Venezuelan government by using the alleged threat of Iran and Hezbollah as pretext, it could then link that intervention in Venezuela to the need to intervene at the source of those pretexts: Lebanon and Iran.

Indeed, the U.S.-backed regime-change efforts targeting Iran are already well underway and the same Trump officials now promoting the alleged link between Iran, Hezbollah and Venezuela are those who have long pushed for a preemptive war with Iran.

In Lebanon’s case, U.S. threats towards Lebanon have failed to derail Hezbollah’s popularity in the country, as evidenced by Lebanon’s most recent elections. However, Israel — whose influence over the Trump administration’s foreign policy has been the subject of numerous MintPress reports — has been actively preparing for war with Lebanon for over a year, with Hezbollah and Hezbollah-supporting civilians as the targets.

As MintPress previously reported, these war preparations have the full support of the United States and top U.S. military commanders have openly stated that — when the war starts — U.S. troops are “prepared to die” for Israel and Israel’s military will have final say over whether or not Americans are deployed to fight and die in this war.

With Pompeo’s recent statement that America is “obligated to take down” the risk of Hezbollah and Iran in Venezuela and beyond, his comments must be seen for what they are: a promise that U.S. intervention and potentially a military invasion in Venezuela will be just the beginning for the new neoconservatives who hold complete control over Trump administration foreign policy.

0 thoughts on “Pompeo Attempts to Link Iran, Hezbollah to Crisis in Venezuela”