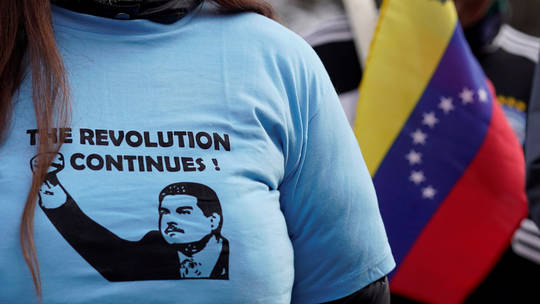 Identical condemnations from the US and allies and the synchronicity show that Venezuela is being targeted for regime change in a concerted plot led by Washington.

Given the South American country is reckoned to possess the largest known oil reserves anywhere on the planet, that obviously makes it a major prize for US and European corporations and banks.

How dare the Venezuelan government aspire to harness its vast natural wealth for independent national development! Especially contemptible is a socialist government in the presumed backyard of Uncle Sam. Such temerity qualifies for urgent regime change.

It has emerged US Vice President Mike Pence phoned Venezuelan opposition leader Juan Guaido last week urging him to make the unprecedented move to declare himself the “acting president”, and denounce the incumbent leader Nicolas Maduro as a “usurper.”

In addition, it was also reported that several weeks ago the Bank of England blocked the Venezuela government from repatriating $1.2 billion in gold reserves held in London. That extraordinary refusal by the British authorities had to have been a deliberate political decision, and was way before the tumultuous events in Venezuela last week, suggesting those events were not simply spontaneous.

The convening of the UN Security Council at the weekend was – not for the first time – a blatant attempt by the US to use the body as an instrument to achieve geopolitical goals. The repeated vilification of the Venezuelan government of Nicolas Maduro – and the elevation of his political opponents – sounded like a choir orchestrated by Washington, remarked Russian foreign ministry spokeswoman Maria Zakharova.

Britain, France, Germany, Spain, Australia, as well as several rightwing Latin American governments have harped on the same talking points issued by the US: Maduro is “illegitimate”, a “usurper”; the opposition leader Juan Guaido is the authentic president, even though Maduro won with an overwhelming majority in last year’s election.

The European Union has demanded that President Maduro calls new elections within eight days, or face reprisals from the bloc, presumably involving economic and diplomatic sanctions. The arbitrary and unreasonable nature of the EU ultimatum suggests it is designed to be impossible for Maduro to fulfill, thereby giving a pretext for sanctioning Caracas.

The president has offered dialogue with the opposition. But Guaido rebuffed the initiative as “fake talks.” That suggests Guaido is being advised by his foreign supporters to adopt a maximalist position. Not talking with Maduro is aimed at intensifying the pressure on the government to use force against the opposition, as well as trying to undermine the president’s legitimacy.

Russia, China, Cuba, Turkey, and Iran, among others, have condemned what they say is a violation of Venezuela’s sovereignty by the US and its allies. Russia’s UN envoy, Vassily Nebenzia, commented that what is going on is a coup d’état led by Washington. It’s hard not to agree with that assessment given the circumstances.

Yet US Secretary of State Mike Pompeo, in remarks to the UN Security Council, donned the mantle of “democracy” and “freedom” and urged all nations to shun the “mafia regime” of President Maduro. Pompeo blasted Russia, China, and Cuba for supporting a “dictator.”

The fact is, it is the US and its allies who are grossly distorting international law and acting like dictators, ordering the Venezuela people on who should be their ruler – an unelected opposition leader, who until recently was an obscure figure.

Thirty-five-year-old Juan Guaido is evidently being coached by Washington to do its bidding for regime change against the socialist government in Caracas. The US has been trying to get rid of the socialist administration in the oil-rich country for the past two decades, first under Hugo Chavez then under his successor, Maduro.

Guaido has suddenly become a rising star in the country’s opposition, which has beenbankrolled by Washington with millions of dollars and generally lionized by the US and Western news media. The script here is the same as in several other regime-change operations. As in Ukraine or Syria, among other countries targeted, the incumbent leader is demonized and delegitimized. The Western-backed opposition is simultaneously valorized as “pro-democracy.”

The process got underway in earnest in Venezuela following Maduro’s inauguration as president on January 10. In Washington, Vice President Pence and Secretary of State Pompeo reportedly stepped up communications with Guaido and the Venezuelan opposition. The rally held last week at which Guaido declared himself “interim president” appears to have been fomented by Washington.

The day before the rally, Pence wrote an oped in the Wall Street Journal deliberately timed for the occasion of the demonstration in Caracas, in which he used language very similar to what Guaido would enunciate. Namely, Maduro’s presidency is described as “illegitimate” and a usurpation of democracy. Pence’s oped was headlined: ‘Venezuela, America stands with you’.

As if that green light for sedition were not enough, it has since been revealed that Pence phoned Guaido the same day in an apparent attempt to stiffen his resolve to go ahead with the rally the next day and his proclamation on assuming the presidency. Perhaps, Guaido’s nerves were failing him, given the grave legal consequences of such treasonous conduct.

Then, the lightning-quickness with which Guaido was “recognized” as the “legitimate president” by the White House and several other US allies begs the conclusion that the events were orchestrated and anticipated.

Three days later, the convening of the UN Security Council and the apparently ready-made talking points used by the US and its allies strongly suggest a level of coordination to target Venezuela.

The audacity of Washington and its allies is astounding. The wanton destruction these powers have inflicted on other countries in the name of bringing democracy – from Iraq to Afghanistan, from Libya, Ukraine to Syria, among others, is truly spellbinding in the worse sense. Still, here they are doing the same demolition job on Venezuela, trying to turn the country into a failed state at the mercy of American hegemony. As Russia’s foreign policy spokeswoman Maria Zakharova drily noted: “Now, it’s Venezuela’s turn.”

So, the Western powers are setting up a parallel government in Venezuela by cobbling together a minority, US-funded opposition. Even though President Maduro is the elected leader and his government is the competent representative at the UN, the process is underway to subvert the sovereignty of the country.

The Western-backed opposition over the weekend has begun appealing to the country’s armed forces to abandon the president and his government. It’s hard to imagine how such openly foreign-sponsored treason would be tolerated for a second by the US or its allies.

What’s more, John Bolton, the US national security advisor, and regime-change maestro, has warned that if the Venezuelan armed forces use violence against the opposition then there will be a “significant response”.

Again, this is the same formula as was applied in Ukraine, Libya, Syria and elsewhere. Not only are the political institutions subverted by external forces, but then when the authorities try to move to defend the nation they have their hands tied behind their backs through slanderous blackmail.

If the UN Security Council actually functioned as it’s supposed to, it should be investigating the regime-change machinations of the US and its allies, with a view to prosecute for criminal aggression.