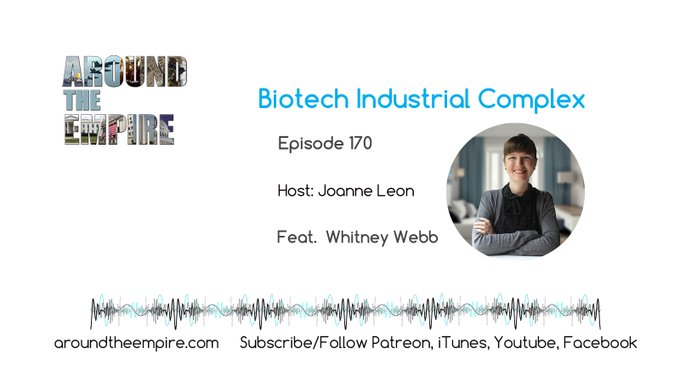 Guest: Whitney Webb. We discuss Whitney’s three-part series titled Engineering Contagion: Amerithrax, Coronavirus and the Rise of the Biotech Industrial Complex, which she and Raul Diego wrote during the past few months.

Quoting from the first article in the series:

“This investigative series, entitled ‘Engineering Contagion: Amerithrax, Coronavirus and the Rise of the Biotech-Industrial Complex,’ will examine these disturbing parallels between the 2001 anthrax attacks and the current scandals and “solutions” of the Covid-19 crisis as well as the simulations that eerily preceded both events. By tracing key actors in Dark Winter from 2001 to the present, it is also possible to trace the corruption that has lurked behind U.S. “biodefense” and pandemic preparedness efforts for decades and which now is rearing its ugly head as pandemic panic distracts the American and global public from the fundamentally untrustworthy, and frankly dangerous, individuals who are in control of the U.S. government’s and corporate America’s response.

Given their involvement in Dark Winter and, more recently, Event 201 and Crimson Contagion, this series seeks to explore the possibility that, just like the 2001 anthrax attacks, government insiders had foreknowledge of the Covid-19 crisis on a scale that, thus far, has gone unreported and that those same insiders are now manipulating the government’s response and public panic in order to reap record profits and gain unprecedented power for themselves and control over people’s lives.”

Whitney Webb is a writer and research and soon to be author. She has made numerous radio, television and video appearances on a variety of programs across the political spectrum. Her work aims to highlight under-reported issues and find common ground between people of different political persuasions regarding corruption, government overreach, the lack of accountability for militaries and intelligence agencies and the military-industrial complex. She publishes at The Last American Vagabond and on her website Unlimited Hangout and she is the host of a new podcast, also titled Unlimited Hangout. She was formerly a staff writer at MintPress News.