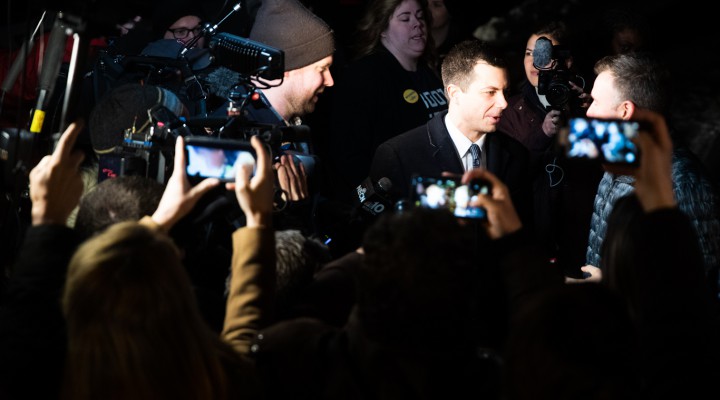 Between efforts to censor information critical of Buttigieg on social media and harass independent media outlets and their reporters at his rallies, it appears that a concerted effort is underway to control the narrative around the DNC primaries

MPN– After the scandal surrounding the recent Iowa Caucus, the 2020 presidential campaign of Pete Buttigieg claimed victory and benefited substantially from the contested outcome by surging in the polls ahead of the New Hampshire primary, which is set to take place on Wednesday.

Buttigieg’s victory lap and post-Iowa boost were largely regarded with scorn by supporters of other candidates for obvious reasons, including the fact that chaos of the Iowa caucus was largely caused by a software application with ties to Buttigieg’s campaign.

In the lead-up to the Democratic primary event in New Hampshire, several disturbing instances have emerged of paid Buttigieg staffers aggressively targeting independent media outlets and progressives while Buttigieg supporters — employed by Facebook as “fact-checkers” — directly censored others in independent media.

For instance, last Saturday at a Buttigieg rally at Keene State College, a paid Buttigieg staffer accosted Norman Solomon, executive director of the Institute for Public Accuracy and co-founder of Action for a Progressive Future, for handing out fliers entitled “Medicare for All. Not Healthcare Profiteering for the Few” that offered mild criticism of both Buttigieg’s and Joe Biden’s healthcare policies.

Solomon, who was outside the building where Buttigieg had spoken, was told by a paid Buttigieg staffer “You can’t pass that out,” referring to the leaflets. Then, when Solomon objected, Buttigieg’s staffer involved campus police officials who then threatened to arrest Solomon for trespassing on the public college’s campus and then handed Solomon a criminal trespass notice that required he not set foot on “Keene State College entire campus” for a year.

At a separate event the next day, a paid Buttigieg staffer was involved in a similar incident involving independent media outlet Status Coup, who were given press credentials to attend the event. The freelance cameraman working with Status Coup, Jamal Jones, was approached by a female Buttigieg staffer who physically ripped his press badge off of his jacket and told him “I don’t think you’re supposed to have credentials.” Jones, along with Status Coup’s Jordan Chariton, had received their credentials after signing in at a press desk for the event.

After
1) Being followed outside by a staffer who acknowledged she was following me when I approached her
2) Asked by another staffer if we snuck in (no).
3) @cinematicjones having his name tag pulled off his jacket

A DIFFERENT staffer came up and apologized pic.twitter.com/yQvUpG4vZ0

Here is @cinematicjones, my freelance cameraman who was just doing his job when a @PeteButtigieg staffer came up to him, touched his jacket, yanked his name tag off (which we were given when we SIGNED IN AT PRESS DESK). pic.twitter.com/tAhoDUI4Yh

Status Coup also stated that they had been closely followed minutes before by another Buttigieg staffer while interviewing those waiting in line about why they are interested in his candidacy. Then, upon entering the venue, another staffer asked them if they had “snuck in” to the event. At the end of the event, a separate staffer apologized to Jones and Chariton. Status Coup contacted Buttigieg’s national press secretary for comment on the incidents and behavior of the campaign’s staffers and has yet to receive a response. Notably, Jordan Chariton stated that he had never experienced or witnessed such treatment of the press at rallies for Trump, Hillary Clinton or any other presidential candidate.

Beyond what occurred with Status Coup, Craig Jardula of the progressive talk show The Convo Couch was accosted and escorted out by security at a Buttigieg rally on February 9 after asking Buttigieg if he would consider pardoning Julian Assange. Recent events clearly suggest that this is becoming a pattern at Buttigieg rallies and will likely increase if other primaries and caucuses have outcomes similar to that of Iowa’s.

In addition to these troubling incidents at Buttigieg rallies, similar incidents have recently occurred on social media, particularly Facebook, where factual reporting by progressive media outlets critical of Buttigieg and his policies has been effectively censored. This separate but related trend is particularly disturbing given the public and close relationship between Pete Buttigieg and Facebook’s Mark Zuckerberg, with Zuckerberg even advising and recommending staff hires to the Buttigieg presidential campaign.

In one particularly glaring instance, comedian and political commentator Jimmy Dore had one of his videos essentially censored by Facebook after it was flagged by an “independent fact-checker,” who turned out to be Ryan Cooper, an 18 year veteran of CNN and a Buttigieg supporter. Dore’s video contained factual, yet unflattering, information about Buttigieg and the manipulation of Iowa Caucus results.

Facebook=Fake News. They are is telling people that the accurate information in my news report about vote flipping in Iowa is false.

My news report was flagged by a guy name Ryan Cooper who works for CNN and supports Buttigieg.

This is how the Establishment rigs elections. pic.twitter.com/uGOXo1V98W

After Dore posted about his experience, several progressives on social media provided screenshots that Cooper, among other Facebook “fact-checkers,” had flagged information critical of the Iowa Caucus process and its contested outcome as “misleading” or “false,” thereby greatly restricting its circulation on the social media platform.

Between the efforts to censor information critical of Buttigieg on social media and harass independent media outlets and their reporters at Buttigieg rallies, it appears clear that there is a concerted effort underway to control the narrative in regards to the DNC primaries and major efforts underway to stop the candidacy of Bernie Sanders, particularly as recent events strongly suggest that the chaos of the recent Iowa Caucus is doomed to repeat itself.