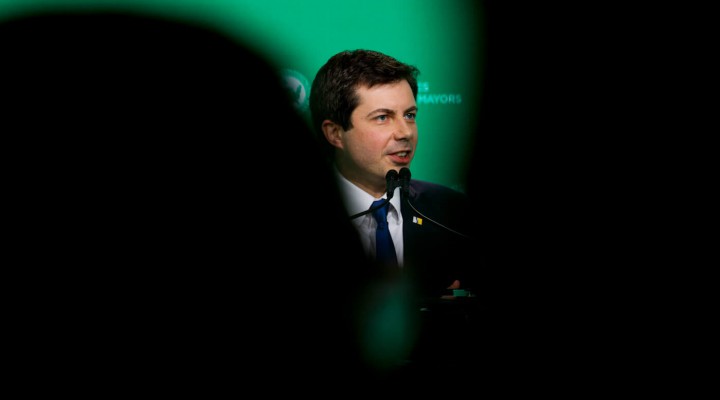 Buttigieg’s decision to not promote any specific policy has allowed him to become a policy chameleon, and his stance on foreign policy, including Israel and Palestine, is no exception.

MPN– Presidential hopeful Pete Buttigieg, whose candidacy is currently being heavily promoted by corporate media, was one of the many 2020 contenders for the Democratic Party who declined to attend the recent annual conference of the American Israel Public Affairs Committee (AIPAC) in apparent response to calls from prominent “progressive” organizations to boycott the event and a growing shift among Democratic voters in favor of Palestinian rights.

However, despite his absence from the AIPAC conference, Buttigieg’s past public statements on the Israel/Palestine conflict echo those of pro-Israel stalwarts in the Democratic Party. Indeed, Buttigieg, in a trip to Israel last year that was funded by the pro-Israel lobby, praised Israel’s security response to protests by Palestinians on the Gaza-Israel border just four days after the slaughter of Gazan protesters by Israeli military snipers — repeating many of the same one-sided talking points about the conflict that define centrists in both the Republican and Democratic parties.

Last May, Buttigieg traveled to Israel as part of a trip for U.S. mayors organized by Project Interchange, an affiliate of the American Jewish Committee (AJC), one of the oldest and most influential Israel lobby organizations in the United States. The AJC regularly conflates criticism of Israel with anti-Semitism and has even accused progressive American Jews of anti-Semitism for their critiques of Israeli government policy.

Soon after the Israel lobby-sponsored trip, which the Times of Israel referred to as a “learning experience trip,” Buttigieg appeared on AJC’s Passport podcast, hosted by Seffi Kogen. Buttigieg, during the 22-minute discussion, stated that Israel’s security policy is “on the one hand very intentional, very serious and very effective when it comes to security and on the other hand not allowing concerns about security to dominate your consciousness.” He then added that his trip to Israel showed him that Israel’s security policy offers “a very important lesson that hopefully, Americans can look to [when] we think about how to navigate a world that unfortunately has become smaller and more dangerous for all of us.”

This statement is troubling for several reasons. First, it suggests that Israel’s security policy does not “dominate” Israeli political consciousness even though nearly every discriminatory policy targeting Palestinians — from the blockade of Gaza to the military occupation of the West Bank to the separation barrier — are all justified by the Israeli state’s claim that it is responding to “existential threats” relating to Israel’s security. Second, Buttigieg calls Israel’s draconian security policies “very effective,” yet does not mention their human costs, such as Israel’s regular imprisonment of Palestinians without charge or its arrest of children for allegedly “throwing stones.” Third, his claim that Israel’s security policy offers a “very important lesson” to the United States suggests that Israel’s apartheid, police-state security policies are a model for homeland security policy in the U.S., a suggestion that concerns the “progressive” voters to whom Buttigieg is currently attempting to appeal.

During the podcast, Buttigieg also claimed that support for Israel “is not a left vs. right issue — at least it shouldn’t be” and stated that “the security and intelligence cooperation [between the U.S. and Israel] is obviously vital, certainly something that is as important for American interests as much as Israeli interests.” This is a drastic over-simplification of the U.S.-Israel relationship and makes no mention of the fact that the U.S. now provides $3.8 billion to Israel annually as part of this “security and intelligence cooperation” and also ignores Israel’s documented espionage efforts targeting U.S. state secrets that have occurred under the guise of this “cooperation.” Notably, former U.S. intelligence officials have claimed that the CIA considers Israel “the Mideast’s biggest spy threat.”

Buttigieg also blamed Hamas, the Islamist group that won Gaza’s elections in 2007 and still governs the enclave, for the “misery” present in the strip. At no point does he mention the air, land and sea blockade — imposed by Israel and Egypt — as having a role in creating “misery” for Gazan residents. Particularly telling is the fact that he blamed Hamas for the situation in the Strip during the Great Return March, when Israeli forces massacred scores of unarmed protestors. Just days after Buttigieg’s visit to Israel and not long before his appearance on the AJC podcast, the IDF shot and killed 60 unarmed Gazans, among them seven minors and a paramedic. During his 22-minute discussion with AJC, Buttigieg never spoke of the Gaza protests directly. A separate point Buttigieg made in the podcast is related to the exchange of fire between Syrian/Iranian forces and Israeli forces in the contested Golan Heights, which Israel annexed in 1981 but is internationally considered (aside from by the United States) as Syrian territory. In speaking of the attack by allegedly Iranian forces on the Golan Heights and the exchange of fire between Israel and Syria that followed, Buttigieg stated:

It didn’t stop people from living their lives and I actually think there’s a lesson to be learned from that for America … to prevent terrorists from succeeding in their goal of becoming our top priority.”

It is notable that Buttigieg chose the word “terrorist” to describe the attack, given that it had been launched by a foreign government, not a terrorist group, and also given the fact that the area had long been overrun by actual terrorist groups that were supported by the state of Israel.

While Buttigieg’s admiration for Israeli security policy and support for continued U.S.-Israel “security and intelligence cooperation” may simply be an indication of his support for Democratic centrist policies, there may be other reasons for Buttigieg’s apparent support of Israel’s apartheid-like policies. For instance, Buttigieg’s past position as a consultant at McKinsey & Co. — recently called “the world’s most prestigious consulting firm” by the New York Times — may have also informed his views.

Buttigieg worked at McKinsey prior to enlisting in the military and jumpstarting his political career. Buttigieg has called his time at the firm his most “intellectually informing experience” and described it neutrally as simply “a place to learn.” Other previous McKinsey consultants have come away with a very different view of the controversial company, with one recently writing:

Working for all sides, McKinsey’s only allegiance is to capital. As capital’s most effective messenger, McKinsey has done direct harm to the world in ways that, thanks to its lack of final decision-making power, are hard to measure and, thanks to its intense secrecy, are hard to know.

The firm’s willingness to work with despotic governments and corrupt business empires is the logical conclusion of seeking profit at all costs. Its advocacy of the primacy of the market has made governments more like businesses and businesses more like vampires. By claiming that they solve the world’s hardest problems, McKinsey shrinks the solution space to only those that preserve the status quo.”

In addition to working with “despotic governments” like Saudi Arabia, McKinsey also regularly works for Israel’s government and military. For instance, McKinsey was given $27 million in 2011 to help “streamline” the Israeli military. McKinsey claimed that it had offered its services to Israel at a steep 36 percent discount. Then, a year later, McKinsey was tasked with reviewing Israel’s police force and determined that Israel did not have enough police patrolling its streets and “lagged” behind other countries in terms of police deployment. Furthermore, the company itself has a large presence in Israel, where it “works across all major sectors of Israel’s economy.”

Buttigieg’s connection to McKinsey, and his decidedly neutral view of the firm, have been largely glossed over in the coverage of his candidacy, despite the controversial nature of the company, which was recently revealed to have advised a leading pharmaceutical company on how to “turbocharge” the sales of opioids to Americans, despite the country’s severe opioid addiction and overdose crisis.

Buttigieg, like several other 2020 contenders for the Democratic nomination, has thus far built his campaign on platitudes and progressive “values” without providing policy plans that back them up. Indeed, Buttigieg is routinely evasive when pressed on any specific policies he champions. When recently asked to specify policies he supports by VICE, the former South Bend, Indiana mayor stated that “Right now I think we need to articulate the values, lay out our philosophical commitments and then develop policies off of that. And I’m working very hard not to put the cart before the horse.”

This same tactic, of promoting “values” and platitudes and failing to run on any policy, has become common in the 2020 field as other candidates who have received fawning media coverage — like Kamala Harris and Beto O’Rourke — have also built their campaign on platitudes and varying degrees of identity politics. It should come as no surprise, then, that Buttigieg has recently been compared to Barack Obama in several mainstream profiles. After all, Obama built much of his campaign on platitudes (i.e., “hope” and “change”) and vague policy positions as opposed to specific, detailed policy proposals.

Buttigieg’s decision to not promote any specific policy has allowed him to become a policy chameleon, and his stance on foreign policy, including Israel and Palestine, is no exception. As an example, Buttigieg has claimed that the Trump administration’s minimal efforts to reduce the number and intensity of “forever wars” has been “largely good,” even though he opposes Trump’s recent calls for a withdrawal of U.S. troops in Syria. Yet the epitome of the Trump administration’s efforts to reduce “forever wars” has been its calls for a U.S. troop withdrawal from Syria.

Buttigieg’s evasiveness and contradictory statements on foreign policy are all the more telling because such evasiveness is not due to a lack of knowledge on the subject. Indeed, Buttigieg wrote his undergraduate thesis on U.S. foreign policy. This suggests that his evasiveness on these issues since becoming a candidate for the presidency is instead based on political expediency.

Buttigieg’s past comments on Israel and Syria are compounded by a recent statement he made via Twitter that reads: “I did not carry an assault weapon around a foreign country so I could come home and see them used to massacre my countrymen.” The tweet was heavily criticized by anti-war voices on social media for its implication that it is perfectly fine to carry assault weapons as part of an occupying force in a foreign country, but not OK to carry those assault weapons domestically.

This troubling double standard suggests that Buttigieg, despite being a veteran, supports U.S. military adventurism abroad. This is further supported by his past position at the Cohen Group, a consulting firm founded by former Secretary of Defense William Cohen, a “moderate Republican” who oversaw the U.S.’ role in the NATO bombing of Kosovo.

In a crowded 2020 field and with mainstream media heavily promoting his candidacy, it is essential that all Americans take the time to research the past statements and positions of a candidate like Buttigieg, as opposed to merely relying on media-generated hype and statements made only after the establishment of one’s candidacy. The U.S., a country undeniably at a crossroads, cannot afford any candidate who cloaks his or her actual opinions and policies in platitudes and evasive or even contradictory language. Thus, a candidate’s past and track record are increasingly important, yet overlooked, aspects in a 2020 race that will have important implications for the country moving forward.