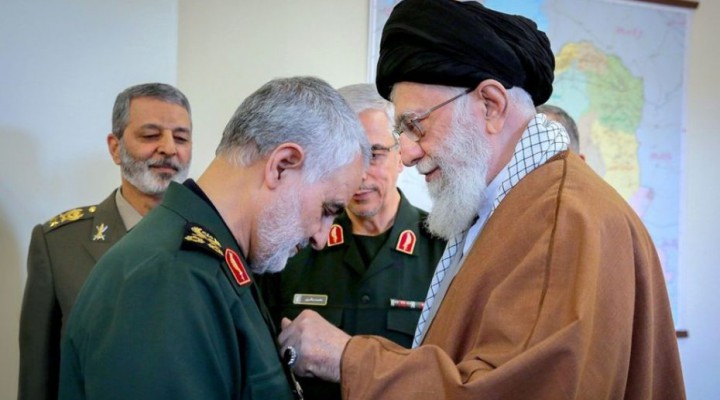 Throughout his military command of the Iranian Islamic Revolutionary Guards Corps’ elite Quds Force, the late Major General Qassem Soleimani ensured that Iran had as its disposal an intricate network of military proxy forces, sympathetic Shi’a Islamic faithful, and armed wings of foreign political and religious allies prepared to respond to an American and/or Israeli military attack. With the Donald Trump administration’s assassination of Soleimani and Iraqi Shi’a militia leaders, all of whom were popular in Iran and Iraq for helping to defeat the Saudi/Israeli-supported Islamic State of Iraq and Syria (ISIS) in Iraq and Syria, the Iranian retaliatory network established by Soleimani stands at a hair-trigger response to the U.S. premeditated murders. The network of Iranian proxies and allies crafted under Soleimani’s guidance — mostly non-state actors but with a few state players – will be Soleimani’s everlasting legacy in future history books on the Middle East and strategic warfare.

Soleimani’s strategy to militarily bloody the nose of the United States through the implementation of global asymmetric warfare, even after his death, will be as important a lesson for U.S. military planners as was the concept of revolutionary warfare employed against the United States in Southeast Asia by Vietnamese General Vo Nguyen Giap. The strategies of Soleimani and Giap are based on versatility, adaptability, and reliance on the element of surprise by weaker military forces against those of global superpowers. Giap brought virtual surrender to the U.S. and its Indochina allies and, if history is a guide, Soleimani’s doctrine of a relying on a massive proxy attack network to defend Iran will bring an end to American dominance in the Middle East.

Unlike General Giap, General Soleimani actually twice coordinated anti-jihadist military operations with U.S. military forces, the first time in 2001, when his Quds Force participated with U.S. Special Forces in attacking Taliban and Al Qaeda positions in Afghanistan during Operation Enduring Freedom. The second time Soleimani and the U.S. cooperated on the battlefield was in taking on ISIS in Operation Inherent Resolve from 2014 to 2017.

Shortly after the 9/11 attack on the U.S., Soleimani sent Quds Force representatives to meet Pentagon officials in Geneva. Soleimani ensured that the U.S. received a map of Afghanistan detailing all the primary Taliban targets that the Americans should hit. Soleimani’s intelligence proved effective when, on October 7, 2001, U.S. forces began attacking Taliban and Al Qaeda sites in Afghanistan. On January 29, 2002, President George W. Bush, during his State of the Union  address to Congress, showed his “gratitude” to Soleimani by lumping Iran with a contrived “Axis of Evil.”

Bush’s rhetoric was crafted by the neo-conservatives who believed that the U.S. should invade and occupy the three nations included on the Axis of Evil list: Iran, Iraq, and North Korea. After the assassination of Soleimani, Vice President Mike Pence added insult to injury by falsely accusing Soleimani of assisting the Taliban and Al Qaeda in the 9/11 attack. It was not surprising coming from an individual who believes the Earth is merely 6,000 years old, according to his understanding of Biblical mythology. It is a nonsensical bit of codswallop that is shared by Secretary of State Mike Pompeo.

In 2017, Soleimani, again, was on the scene, this time in Iraq. In order to defeat ISIS, which took over large swaths of Iraqi and Syrian territory, Soleimani consolidated the position of the Patriotic Union of Kurdistan’s Peshmerga forces based in its stronghold of Sulaimaniya. Working in concert with U.S. and NATO forces, Soleimani’s Quds Force and various Popular Mobilization Forces (PMF), consisting of Shi’a, Sunni, Yazidi, Chaldean, Turkmen, Shabak, and Assyrian units. When the units of Soleimani’s Quds Force and PMF commander Abu Mahdi al-Muhandis and Khazali Network leader Qais al-Khazali neared the Syrian-Iraqi border near the ISIS-controlled Syrian town of Deir Ezzor, they were supplemented by Syrian units of the Syriac Christian Spirit of God Jesus Son of Mary Battalions. Trump and his fanatic fundamentalist Christians and Zionists decided that all of Soleimani’s allies – Shi’a, Sunni, Yazidi, Chaldean, Assyrian, Turkmen, Shabak, Syrian Kurds, Syrian Alawites, Palestinians, Lebanese Shi’as, Yemeni Zaidis, and Syrian Druze – were all foreign terrorists subject to U.S. sanctions.

The Trump policy with regard to those who are chiefly credited with defeating ISIS, Al Nusra, Al Qaeda, and other jihadis and Salafists in Syria and Iraq – General Soleimani, the PMF commanders, and multi-religious unit commanders – is as inane as Trump’s other misguided policies. When it comes to the Middle East, it is clear that Trump takes direction from the Muslim Brotherhood-influenced regime of Turkish President Recep Tayyip Erdogan; the Wahhabi fanatic Saudi Crown Prince Mohammed bin Salman and his dementia-addled father, King Salman; and the corrupt Zionist right-wing nationalist Israeli Prime Minister, Binyamin Netanyahu. With that sort of bad-tempered quartet advising Trump, there should be little surprise that Trump’s foreign “policy” is now the subject of ridicule and derision around the globe.

Trump, likely aware that he has stirred up a hornet’s nest in ordering the assassination of the popular Soleimani, has reduced himself further in twice threatening to destroy 52 Iranian cultural sites, one for each of the 52 hostages held by the Islamic Republic at the occupied U.S. embassy in Tehran in 1979. It is not certain whether Trump understands or has been briefed on the network Soleimani established to fight Iran’s enemies worldwide in the event of a U.S. attack on the Iranian homeland. However, Trump should be extremely worried.

In what will constitute a nightmare for U.S. intelligence and military commanders, these PMF units act largely independent of one another, especially after a call to arms is issued. In addition to the PMF units, other units allied with the Iraqi government include the Assyrian Nineveh Plain Protection Units; the Yazidi Protection Force of Êzîdxan (HPS); the Assyrian Bethnahrain Women’s Protection Forces operating in the Syrian-Iraqi border region; Bayariq al-Shaitat, a Sunni militia that operates in the Deir ez-Zour governate in Syria; Forces of the Fighters of the Tribes  in Syria; and the Syrian National Defense Forces (NDF), which operate with IRGC, Iraqi Kata’ib Hezbollah, and Lebanese Hezbollah in Syria.

In addition  to the layer of Iranian proxies in Iraq and Syria, there is a second layer of additional forces from which Iran can draw to carry out asymmetric attacks against the U.S. These include Liwa Fatemiyoun, a Shi’a Afghan militia active in Syria against ISIS; Hezbollah in the Hejaz, which operates in Saudi Arabia’s Shi’a-populated Eastern Province, Kuwait, and Bahrain;  the Conquering Lion of God Forces of Iraq and the Levant; Al-Ashtar Brigades (AAB) that operates among the Shi’a majority in Bahrain (the home of the U.S. Fifth Fleet); the Brigade of Abu al-Fadl al-Abbas, a Shi’a “foreign legion” that operates in and around Damascus; the Syrian Ba’ath Brigades, the Syrian Christian militia of the Lions of the Cherubim, Ararat Group, Lions of the Valley, Lions of Hamidiya, Intervention Regiment, and Lions of Dwel’a; and the Syrian Palestinian militia of the Jihad Jibril Brigades, the Jerusalem Brigade, Palestinian Islamic Jihad, Galilee Forces, As-Saiqa, and the Al-Aqsa Shield Forces.

A third layer, which exists outside of Iran’s immediate vicinity, includes Hamas in Gaza and the West Bank; Ansar Allah or the “Houthis” that control much of north Yemen; Lebanese Hezbollah; the Islamic Movement of Nigeria; the Tiger Force or 25th Special Mission Forces Division of the Syrian Arab Army; and Jaysh al-Muwahhideen, a Syrian Druze militia.

Trump may have threatened to destroy 52 Iranian cultural sites, however, Iranian culture, language, and religion external to the country also provides Iran with ready-made sympathizers found in Shi’a, Ismaili, and Zoroastrian Parsi communities. General Soleimani was adept at currying favor among pro-Iranian communities among the Talysh of Azerbaijan and in the Nakhichevan Autonomous Republic of Azerbaijan; the Balawaristan National Front in Gilgit-Baltistan in Kashmir; the Ismailis of Pakistan and Afghanistan; the Shirazi people of Zanzibar, Pemba, and Comoros; and the Hazara of Afghanistan.