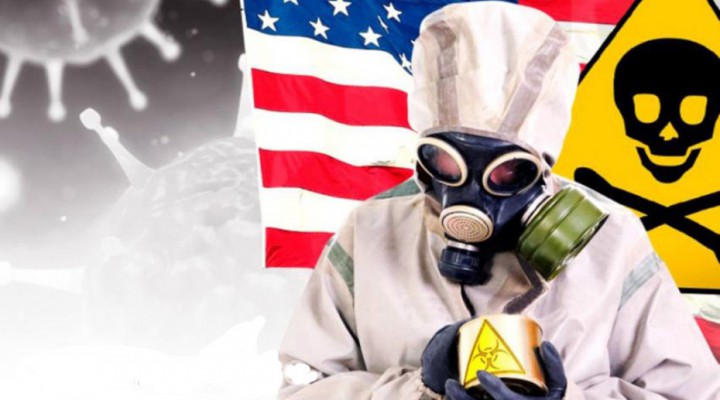 Although there is no recent history of nation-states propagating biological warfare attacks, there is a history of dangerous religious cults being involved in preparing for or carrying out them.

Far right-wingers in the United States and other countries are pushing the propaganda line that China was somehow involved in the creation or spread of the Covid-19 virus, formally known as SARS [Severe acute respiratory syndrome]-CoV-2, to the rest of the world either deliberately or from an accidental release from the Wuhan Institute of Virology. Although nation-states have, over the decades, conducted research on and produced biological warfare weapons, there is no recent documented proof of a government being engaged in the widespread release of a biological warfare agent to cause maximum deaths. The 1972 Convention on the Prohibition of the Development, Production, and Stockpiling of Bacteriological (Biological) and Toxin Weapons and on their Destruction, the short name of which is the Biological Warfare Convention, bans the production or release of bio-weapons as well as mandates the destruction of existing stockpiles.

The People’s Republic of China acceded to the Biological Warfare Convention on November 15, 1984. China has experienced a horrifying history of being victimized by biological warfare. The Imperial Japanese Army’s Unit 731 was responsible for spawning bubonic plague among the Chinese population by spreading plague-infected fleas over Chinese cities from low-flying aircraft. Typhoid and paratyphoid was spread throughout the city of Nanking by Unit 731 by introducing typhus germs into well water and food. A Japanese bio-war attack on Changda infected more than 10,000 people with cholera. Unit 731 also introduced smallpox, botulism, dysentery, and anthrax on to unsuspecting Chinese civilian populations. Those who now accuse the Chinese government of developing Covid-19 as a weapon have neither an appreciation for recent Chinese history nor an understanding of how China was victimized by biological warfare during World War II.

Although there is no recent history of nation-states propagating a biological warfare attack – the allegations by U.S. and British intelligence about Saddam Hussein possessing a bio-warfare capability turned out to be bogus – there is a history of dangerous religious cults being involved in preparing for or carrying out biological warfare attacks.

Since the 1970s, there have been several cases of religious cults either dabbling in biological warfare research or engaged in deploying it. The cults involved include the Japanese Aum Shinrikyo movement, the Bhagwan Shree Rajneesh cult, the “People’s Temple” of Reverend Jim Jones, and the one that requires a much closer investigation after the spread of Covid-19, the Chinese Falun Gong.

At the center of the current propaganda war being waged on China is Falun Gong, a shadowy religious cult that has ties to the U.S. Central Intelligence Agency. The cult’s newspaper, “The Epoch Times,” has been accredited by the Donald Trump White House and its propaganda has been championed by such Trump allies as Republican Senators Tom Cotton of Arkansas and Ted Cruz of Texas, as well as former Trump ambassador to the United Nations Nikki Haley and right-wing radio commentator Rush Limbaugh. Trump’s personal attorney, Rudolph Giuliani, whose main responsibility for Trump appears to be the proffering of far-out and discredited conspiracy theories, has accused China of creating Covid-19 as a “bio-weapon.” “The Epoch Times” has championed many bogus stories being advanced by Giuliani. Being enticed into the world of Falun Gong is not Giuliani’s only entanglement with a cult. His support of the Iranian cult, the Mojahedin-e-Khalq (MEK), has turned the former New York mayor into a favorite for anyone wanting unsubstantiated allegations and propaganda to reach the ears of Donald Trump.

Falun Gong propaganda is also creeping into the pronouncements of Secretary of State Mike Pompeo and America’s diplomatic circles. Increasingly, Falun Gong propaganda is creeping into official press releases from the State Department with accusations that Covid-19 development was a project of the “Chinese Communist Party.” Similar propaganda has also found its way into the broadcasts of Radio Free Asia, part of the U.S. government propaganda operation that is under the auspices of the Broadcasting Board of Governors (BBG). The attempt to revive a Cold War with China has also been emboldened by the Republican Attorneys General of Missouri and Mississippi, who have both filed lawsuits against the government of China for damages from Covid-19.

The State Department and White House war on the World Health Organization (WHO), including the Trump administration’s freeze on funds to the international organization, has relied on Falun Gong propaganda that claim the WHO is a “China-centric” body. The cult, which practices the same sort of character assassination campaigns witnessed by several other right-wing organizations, has targeted the top three officials of WHO — Director-General Dr. Tedros Adhanom Ghebreyesuas, Assistant Director-General Dr. Bruce Aylward, and Executive Director of the WHO Health Emergencies Program Dr. Michael Ryan — as “Chinese Communist” agents-of-influence. The rhetoric is torn right out of the Cold War history pages of the 1950s.

Falun Gong’s “spiritual leader,” Li Hongzhi, is a textbook case of a cult leader. The Jilin, China-born Li, who lives in New York City and a permanent resident of the United States, claims that he acquired “supernatural powers” at the age of eight in China. These powers include the ability to walk through walls and levitate. Li claims that extraterrestrials have invaded the minds of humans and it has led to a reliance on computers overseen by massive corruption.

In a couple of recent articles in The Epoch Times, Falun Gong appears to be taking credit for launching Covid-19, which runs counter to the anti-Beijing propaganda emanating from Pompeo, White House trade official Peter Navarro, and leading congressional Republicans. On March 11 and April 26, 2020, The Epoch Times ran two editorials suggesting that Covid-19 was not a virus caused by the Chinese government, but one intended to destroy the Chinese Communist Party (CCP) and its international supporters. The articles states:

“The spreading of the virus shows a clear pattern, which is, it is selectively targeting the CCP and is aimed at eliminating the CCP and those who are pro-communist or who have close ties with the CCP. All regions that are hard-hit by the virus outside China are those having intimate ties with the CCP, those who have supported the CCP in terms of trade, investment, or helping the CCP improve its international image. Likewise, individuals who have been the CCP’s supporters often find themselves vulnerable to the CCP virus.” The article suggests that New York City became a hot zone for the virus because of its financial links to the Chinese government and the presence of the United Nations and Wall Street, the latter accused of being a “behind the curtains financier helping the Chinese Communist regime prolong its life.”

The Epoch Times articles offer a Covid-19 cure: “Staying away from the CCP, condemning the CCP, not supporting the CCP can help any individual, organization, and country alleviate or even avoid the attacks of the CCP virus. They will then embrace a wonderful future.”

Such a manifesto would normally attract the interest of the Federal Bureau of Investigation (FBI) and Department of Homeland Security. However, with both organizations under the thumbs of Trump loyalists, such a direct threat against New York by Falun Gong has gone unnoticed. The Epoch Media Group has become part and parcel of the Trump re-election campaign. The Group’s New Tang Dynasty Television (NTDT) and Sound of Hope Radio Network are virtual propaganda arms of the White House and engage in echoing back and forth the same unfounded claims found in other pro-Trump media operations, including One America News Network (OANN), based in San Diego; and The Washington Times, the publication of yet another Asian-founded religious cult, the Unification Church of the late Korean Reverend Sun Myung Moon.

If Covid-19 has a non-natural origin, such statements place Falun Gong squarely as a major suspect in unleashing and propagating the virus. Cults have a history of committing acts of bio-chemical terrorism, including the Japanese Aum Shinrikyo movement, which launched a sarin gas attack on the Tokyo subway system on March 20, 1995, killing 13 people and injuring thousands of others. The Japanese group was also found to be in possession of the Ebola virus that was procured from Zaire in 1992. The mass suicidal People’s Temple of the CIA-linked Reverend Jim Jones was discovered to be dabbling in bio-war research at it Jonestown, Guyana compound. There were links between Jones and the Chemical and Biological Warfare Research at Dugway Proving Grounds, Utah and the CIA-connected research being conducted at the St. George’s University Medical School in Grenada. In 1984, the Bhagwan Shree Rajneesh cult, an Indian mystic movement, purposefully contaminated salad bars at ten restaurants in The Dalles, Oregon with Salmonella typhi, sending 751 people to the hospital. Both Al Qaeda and the Islamic State of Iraq and the Levant (ISIL) were also discovered to be pursuing bio-war weapons. An Al Qaeda affiliate, Ansar al-Islam, was reported to have conducted bio-terrorism experiments in northeastern Iraq using nerve gas, aflatoxin, and ricin. An ISIL offshoot, Boko Haram, reportedly poisoned well and rivers in northeastern Nigeria with biological agents.

Falun Gong’s threat against New York City is even more alarming when considering the conclusion found in a February 10, 2014 “UK Secret UK Eyes Only” report from the Defense Science and Technology Laboratory (DSTL) in Porton Down, England. The report warned that NSAs (non-state actors) could try to weaponize viruses like the deadly Ebola. It should be noted that Falun Gong falls into the category of a non-state actor.

0 thoughts on “Cults and Bioterrorism: A Toxic Duo”