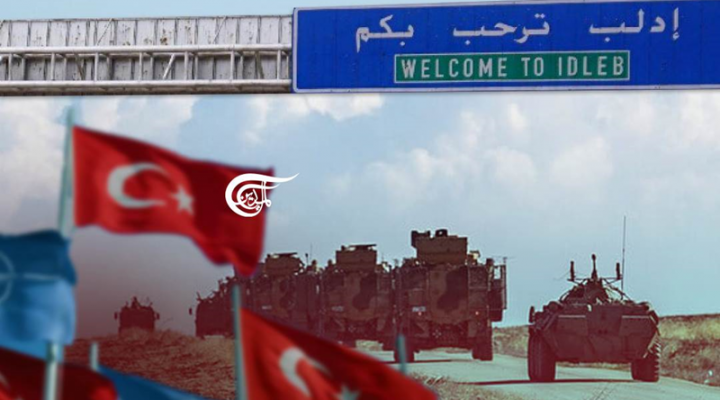 The full liberation of Idlib Province from terrorists is stalled by threats of deeper NATO intervention, in support of their proxy ‘rebels’.

Syria’s pilgrimage site of Nabi Younis (Prophet Jonah) sits atop a 1500m coastal mountain range overlooking, to the west, the Ghab plains of NW Hama and the hills of western Idlib. The site has been taken over by the Syrian Arab Army’s 4th Division, as part of its strategic encirclement of NATO’s remaining Al-Qaeda enclave.

The range provides a tremendous panoramic view over Hama’s rift valley, overlooking towns like Jurin, defended by the Syrian Arab Army (SAA), and others held by the armed groups and their Turkish occupation sponsors, like Jisr Al-Shughur and Sirmaniyeh.

By the end of 2021, large-scale terrorism in Syria had been mostly defeated, remaining only in and around the safe havens provided by the occupations of NATO’s two largest armies (Turkey and the USA) and the Israeli-occupied Golan.

The Syrian Arab Army (SAA) deployment around Nabi Younis is one of several army bases positioned and ready to liberate the remainder of Idlib Province from what a US official in 2017 called “the largest Al Qaeda safe haven since 9/11”, but which the New York Times in 2021 revised as “a rebel group once linked to Al-Qaeda”.

Of course, this anomaly is simply an attempt to hide NATO sponsorship of all the terror groups in Syria used, as senior US officials admitted several years ago, in efforts at regime change or, failing that, dismemberment of the Syrian nation.

When the time comes to liberate the rest of Idlib, this 4th division will be joined by the 9th Division, now based at Ma’arat Al-Numan, the Republican Guards at Saraqeb, and the 25th Division (formerly ‘Tiger Forces’) stationed in north Hama. These four divisions are all led by commanders with great experience in defeating Nusra, ISIS, and their allied ‘jihadist’ groups across all of Syria’s various terrains.

Between August 2019 and February 2020 the SAA drove Hayat Tahrir Al-Sham (HTS: an international Al-Qaeda coalition led by Jabhat Al-Nusra) out of the Idlib towns of Khan Sheykhoun, Ma’arat Al-Numan, and Saraqeb. That freed the southeastern third of Idlib Province and opened up the M5 motorway, which connects the south with Aleppo, Syria’s second city.

Unlike the New York Times, on HTS the UN Security Council does not mince words:

“In January 2017, Al-Nusrah Front created Hay’at Tahrir al-Sham (HTS) as a vehicle to advance its position in the Syrian insurgency and further its own goals as Al-Qaida’s affiliate in Syria. Although the emergence of HTS has been described in various ways … Al-Nusrah Front has continued to dominate and operate through HTS in pursuit of its objectives.”

Yet, the full liberation of Idlib Province from these terrorists was stalled by threats of deeper NATO intervention, in support of their proxy ‘rebels’.

After more than 30 Turkish troops stationed in Idlib were killed in the 2020 offensive, Turkish President Erdogan called for NATO support, threatening to release millions more refugees into Europe. With possible US and European air attacks on Syria (for ‘humanitarian’ reasons), in early March 2020, Presidents Putin and Erdogan agreed to yet another ceasefire.

With Idlib only partly liberated, and although Russia had previously accused Erdogan of breaching his commitments in Idlib, the latest ceasefire did not stop the Turkish leader from reinforcing the terrorist groups. He also threatened to use heavy weapons against the Syrian Army, if it sought to liberate its own territory.

Since then, the SAA at Nabi Younis and in S.E. Idlib has been actively repelling small arms attacks and occasional shelling from the HTS terrorists. General J at Saraqeb told this writer that a key aim is to incite direct clashes between the Turkish and Syrian armies so that the armed groups take cover behind the Turkish ‘observation’ posts.

In the Ghab plains, NATO’s terrorists have repeatedly attacked the civilian village of Jurin and tried incursions on SAA positions with tanks. Yet the gangs have made no ground.

In each SAA position, there are soldiers with rifles set on makeshift tripods, ready for the many surveillance drones and the occasional armed drone, which can fly as high as 5,000 meters. This expensive technology comes directly from the NATO states.

Up in the range at Nabi Younis General R has intelligence and airpower support from the Russians, ready with their war jets at Hmeimim airbase on the coast. There are also several Hezbollah officers in the mountain, acting as intelligence advisors. But the liberation battles are fought by Syrians, the General stresses.

There is not much mystery about how they will recapture major towns like Jisr Al-Shughur and Idlib City. As in Aleppo, Douma, and Ma’arat Al-Numan they will begin with air and artillery attacks, then surround each target, control the exits and carve in at the edges, slice by slice.

The western war media will once again scream that ‘civilians and children’ are being slaughtered. The sources for their reports will once again be those same throat-cutting Al-Qaeda gangs, universally hated in Syria.

But there will be no ‘green buses’ this time to take defeated ‘jihadists’ to a safe haven. More than one commander told me: “They will flee to Turkey and Europe or they will be killed.”

0 thoughts on “Liberating Idlib: The view from Nabi Younis”