HOME / SOCIAL/CULTURAL / The USA on the brink of civil war

The USA on the brink of civil war 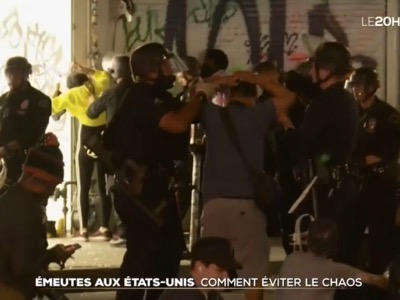 In this article, the author seeks to draw our attention to a fact that is difficult for Westerners to conceive of: the American people are experiencing a crisis of civilization. They are so deeply divided that the presidential election is not just about electing a leader, but about determining what the country (empire or nation?) should be. Neither side is capable of accepting to lose, so much so that each could resort to violence to impose its point of view.

As the U.S. presidential election approaches, the country is divided into two camps that suspect each other of preparing a coup d’état. On one side are the Democrats and the non-party Republicans, and on the other are the Jacksonians, who have become the majority in the Republican Party without sharing its ideology.

Remember, already in November 2016, a media manipulation company headed by the master of Agit-Prop, David Brock, raised more than 100 million dollars to destroy the image of the President-elect before he was invested [1]. Since then, before he could do anything about it, the international press has portrayed the U.S. president as incapable and an enemy of the people. Some newspapers have even called for his assassination. For almost four years, his own administration has constantly denounced him as a traitor paid by Russia and the international press has violently criticized him.

Currently, another group, the Transition Integrity Project (TIP), is planning scenarios to overthrow him in the 2020 election, whether he loses it or wins it. The case has become national in scope since TIP founder Professor Rosa Brooks leaked a lengthy article in the Washington Post to which she is a regular contributor [2].

The TIP organized four role-playing games last June. It simulated various results to anticipate the reactions of the two candidates. All the participants were Democrats and Republicans (ideologically speaking, not “Republicans” in the sense of party membership), none of them Jacksonian. Unsurprisingly, all of these personalities believe that “the Trump administration has consistently undermined basic standards of democracy and the rule of law. It has adopted many corrupt and authoritarian practices. They therefore concluded that President Trump would attempt a coup d’état and imagined that it was their duty to pre-emptively devise a “democratic” coup d’état [3].

It is a characteristic of contemporary political thought to stand up for democracy, but to reject decisions that run counter to the interests of the ruling class. Indeed, TIP members readily admit that the US electoral system they defend is profoundly “anti-democratic”. The constitution does not attribute the presidential election to citizens, but to an electoral college of 538 people appointed by the governors. The participation of citizens, which was not foreseen at independence, has gradually become the norm in practice, but only as a guide for governors. Thus, in 2000, when George W. Bush was elected, the Florida Supreme Court recalled that it did not have to know the wishes of the citizens of Florida, but only those of the 27 voters appointed by their Florida governor.

Contrary to popular belief, the U.S. Constitution does not recognize popular sovereignty, but only the sovereignty of governors. Moreover, the Electoral College designed by Thomas Jefferson has not functioned properly since 1992: the elected candidate no longer has the majority of the wishes of the citizens in the states that tilt the election [4].

The TIP has highlighted just about everything that could happen in the three months between the election and the nomination. It acknowledges that it will be very difficult to determine the results given the use of absentee voting in times of epidemic. The TIP deliberately did not explore the possibility that the Democratic Party would announce Joe Biden’s election despite an undercount and that House Speaker Nancy Pelosi would swear him in before Donald Trump could be declared the loser. In such a case, there would be two rival presidents, which would mark the beginning of a Second Civil War.

This eventuality encourages some to consider seceding, to unilaterally proclaim the independence of their state. This is particularly true on the West Coast. To prevent this process of disintegration, some advocate dividing California in order to give more members of the Electoral College to its population. However, this solution is already a stance in the national conflict because it favours popular representation at the expense of the power of the governors.

In addition, last March I mentioned the temptation of a putschist coup by some military personnel, [5] to which several high-ranking officers later referred [6].

These different points of view attest to the deep crisis that the United States is going through. The “American empire” should have disintegrated after the dissolution of the Soviet Union. This did not happen. It should have reinvented itself with financial globalization. It did not. Each time, a conflict (the ethnic division of Yugoslavia, the attacks of September 11) came to rekindle the dying. It will no longer be possible to postpone the deadlines for much longer [7].

0 thoughts on “The USA on the brink of civil war”