The Campaign to Topple Jeremy Corbyn: A webinar hosted by Miko Peled 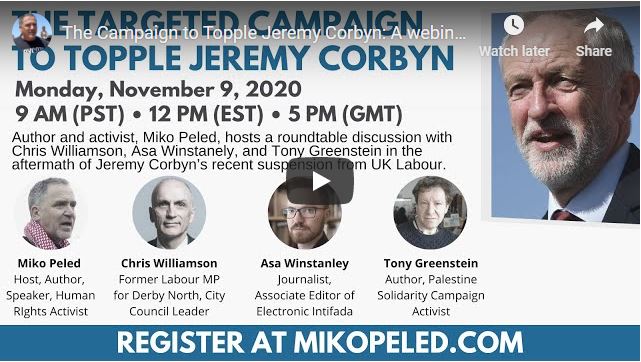 In September 2018, the UK #Labour Party adopted a controversial guideline on antisemitism issued by the International Holocaust Remembrance Alliance (IHRA). This definition folds in criticism of Israel’s treatment of #Palestinians into the definition, establishing a powerful apparatus of censorship which would massively punish #Palestinian rights advocates. Pro-Israel groups along with the UK’s neo-liberal establishment worked tirelessly to tarnish the character of Jeremy #Corbyn (Labour Party leader), Chris Williamson (Labour MP), and several other members of Labour. This sophisticated disinformation and smear campaign has culminated in Corbyn’s recent and shocking ousting from UK Labour in late October of 2020.

Miko Peled hosts a roundtable discussion with Chris Williamson (Former Labour Party MP), Asa Winstanley (Journalist), and Tony Greenstein (Activist, Author) who will analyze the events and forces that led to Corbyn’s fall at the hands of pro-Israels special interest groups. Chris Williamson, Asa Winstanley, and Tony Greenstein all faced pressure and/or oustings from their respective roles within the UK Labour Party over similar smears of “antisemitism”. In this online event, we will hear from each of these esteemed UK journalists, politicians and activists who have been directly affected by and witnessed this vast smear campaign and political suppression on the ground level.

0 thoughts on “The Campaign to Topple Jeremy Corbyn: A webinar hosted by Miko Peled”