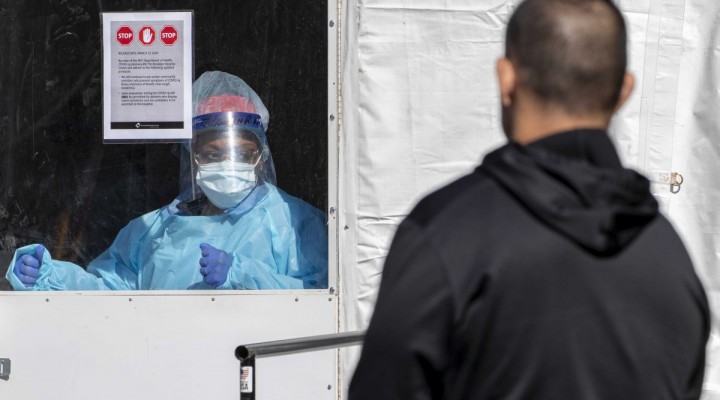 Exclusive, John Lennon- COVID-19 is another wake up call: economies are more important than people. Out of thin air trillions have been found to bail out Wall Street. The green back is the global currency but somehow the US can print and flood the world with them. Hence they do not experience hyperinflation and the US$100 bill remains the largest denomination. When I was a child the largest denomination in Jamaica was $20; it is now $5000. No wonder the US can fund their invasion machine because for some, money does grow on trees.

However Africa, with all it’s mineral wealth cannot print money without suffering. It is begging the G20 for help; a proposal for a US$150 billion emergency financing package that also called for, quote “all interest payments to government loans, and part of the debt of low-income countries, should be written off.” There is absolutely no chance of debt forgiveness when the colonizers control global financing: every year France abstracts over US$500 billion from the countries it sacked and pillaged.

Globally, COVID-19 has hit economies hard and Jamaica has a terrible medium term prognosis. With tourism dead and call centres losing clients there are less sales for the plethora of street venders and less passengers to transport. There will also be the inevitable decline in remittances – US$2.2b per annum – so who will be able to afford the school fees, uniforms, books etc. for the new school year? There will be an increase in absenteeism and with a reduction in the amount of fees collected the dilapidated, underfunded, charity dependent schools will be further hampered. The system was described as educational apartheid and COVID-19 will further damage a product that was designed to create poverty. Across the globe the poorest children are being left further behind so as usual, the poor suffer disproportionately and this pandemic will accelerate the rate of poverty. And the rate will be greatest in ex-colonies.

With finances broken and millions out of work, many countries will turn to the IMF. However, COVID-19 along with the climate crisis and the Sustainable Development Goals (SDGs) present opportunities for the IMF to devise programmes based on sustainability, not austerity.

In regards to the SDGs, the following quote is from the IMF website: Development needs to be economically, socially and environmentally sustainable. The IMF helps countries around the world achieve the SDGs by working with them to develop the foundation for strong, sustainable economic growth, job creation and poverty reduction.

Really? Well economic growth is directly linked to energy costs and Jamaica has electricity rates amongst the highest in the world. It is so expensive that the payback period for a solar investment is under 4 years (in the US it is 6-8 years). The cost of solar panels have plummeted but fossil fuel importing tropical countries such as Jamaica have state infrastructure on the grid. Here is an opportunity for energy reform.

Job creation is essential so the model should be to break even whilst creating jobs paying a living wage. The implementation stage for solar facilities and streetlights would create significant employment including work in construction. Waste-to-energy and recycling – the West floods Africa with e-waste – would create sustainable employment. As far back as 2009 waste-to-energy was discussed in Jamaica and it was estimated back then that annual savings of US$60m were possible so it is viable. Economic growth is also directly linked to education so profits could be invested in children.

Hence the IMF could use lending for state investment in renewables as the COVID-19 rebuilding tool and more importantly, the debt could be repaid without austerity measures. Simply apply prudence: instead of indefinitely paying electricity bills, schools for example, could service fixed-term loan agreements – two schools reported unbelievable paypack figures under a year  – to pay for their own electricity generating facilities. Where solid waste management is subcontracted to the private sector we see the West using dumping in “third world countries” as a solution. State investment should stop this.

The Jamaican people pay the privately owned electricity supplier around US$150m every year. So with a payback period of 4 years, around US$600m is needed to solar power public infrastructure. If the IMF loaned US$1b (the extra $400m infrastructure improvements, waste-to-energy plus recycling plants and contingencies) over a 20 year loan period the repayments would be US$52.5m. With the typical 3 year grace period the country would save around US$100m annually from solar plus the profits from waste-to-energy.

The cost of electricity has destroyed manufacturing. The vast majority of clothing and tourist merchandise are made in China so solar powered factories and workshops should be examined. “Made in China” tags on school uniforms must be made a thing of the past. Quality products are as rare as hens teeth, it is all CCC – Cheap Chinese Crap – which quickly disintegrates resulting in more purchases. It is an unsustainable false economy and the poor are trapped in it.

The economic viability of renewables is irrefutable. However, the PM tweeted the following about his government’s economic management:

Jabberwocky! When one considers the socio-economic benefits of state investment such as free and better funded education, their policies are evil. In 2015 Jamaica was considered to be enduring “the most austere budget” in the world and nothing has changed; poverty is increasing and COVID-19 started to make matters worse weeks ago.

So will the IMF lend for energy reform? There is a better chance of hell freezing over. With help from the UN the lucrative Jamaican renewable energy industry is being gifted to the private sector. The IMF is fully aware of the economic viability of renewables but endorses a system that is detrimental to the 99%: for the rich to get richer from free energy sources using infrastructure that needs little to no management.

The IMF could use it’s influence to create a fairer system – the vast majority of the minerals required for the renewable energy industry are exploited from Africa – create a system where cobalt, cocoa, coffee etc. have fair prices. It could start that process immediately. Africa is rich in free solar radiation but the IMF is oblivious to low cost solar panels as an alternative to importing expensive fossil fuels. In the Caribbean and Latin America the Inter-American Development Bank (IDB) is the biggest lender but it promotes investment in US LNG with the blessing of the IMF.

The IMF is synonymous with austerity and needless suffering, globally. And the fact that South Africa’s racist apartheid dictatorship was invited to become a founding member tells you all you need to know about the IMF.

COVID-19 is destroying lives and economies but looking for economic solutions that benefit the majority is not the priority of the IMF, maintaining the status quo is regardless of the human cost or negative impacts on the planet. It does what it was designed to do and keeping poor nations dependent is one of it’s goals.

One thought on “Jamaica, Covid-19 and the IMF”