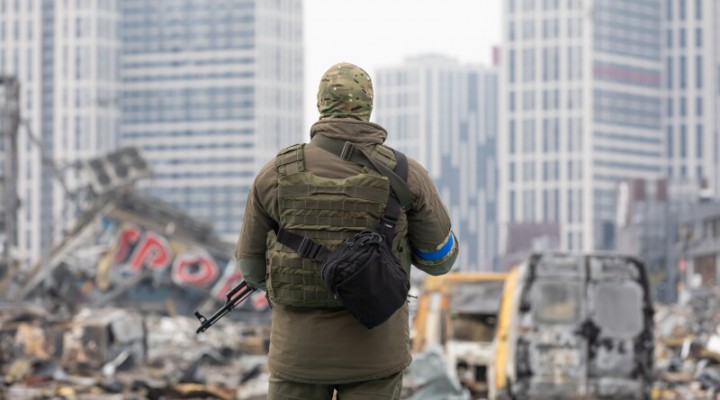 While some observers predicted a short conflict resulting in a decisive Russian victory, the war in Ukraine has turned into a classic military slugfest, the outcome of which is uncertain. Both Russia and the US agree that the future of European security is at stake, and as such neither appears willing to accept anything less than total victory for their side. The result is a dangerous stalemate that runs the risk of escalating into a larger European conflict.

As Russia and Ukraine enter the third month of what Russia euphemistically calls its “special military operation,” but which the rest of the world views as little more than the outright invasion, occupation and dismemberment of Ukraine, any expectation of a quick and easy Russian victory has been dashed by the unexpected tenacity of the Ukrainian defenders and the harsh realities of modern large-scale ground combat.

While the final outcome of the conflict has yet to be determined, the unforgiving metrics of modern military math suggest Russia is approaching a point where its superiority in firepower and maneuver on the battlefield will at some point achieve a victory in southern and eastern Ukraine that will result in consolidation of Russian control over the entire Donbas region, along with a strategically important land bridge connecting Crimea with the territory of the Russian Federation. Russia’s stated military objective of “liberating” the Donbas region will have been accomplished.

Any consolidation of Russian control over this region could, however, be just a means to a larger goal of creating a new security framework in Europe that addresses Russian security demands. This requirement was spelled out by Russia in a pair of complementary draft treaties delivered in mid-December 2021, which demanded that Nato “shall not deploy military forces and weaponry on the territory of any of the other states in Europe in addition to the forces stationed on that territory as of May 27, 1997” — meaning most of Eastern Europe, including Poland, the Baltic states and Balkan countries. The Russians also demanded, among other things, that the US not operate any military bases on the soil of former Soviet republics.

These proposed treaties also called for the US and Russia to refrain from deploying troops in areas where they could be perceived as a threat to national security, and a ban on sending their aircraft and warships into areas where they threaten each other’s territory, such as the Black Sea. The Russian proposal also called for limiting deployment of ground-launched intermediate-range and shorter-range missiles and prohibiting the deployment of nuclear weapons outside national territories.

The US and its Nato allies categorically rejected any such limits on their presence in Eastern Europe. Many observers argue that Russia knew its demands were unrealistic and simply used them to justify its subsequent military actions. This line of thinking ignores the reality that Russia had opposed the eastward expansion of Nato since the concept was first formally floated by the US’ Clinton administration in 1993. Then-Russian President Boris Yeltsin expressed “uneasiness” over the discussion of “quantitative expansion” of Nato and strongly advocated “a pan-European security system” instead. “Not only the opposition,” Yeltsin wrote in a letter to his US counterpart, “but moderate circles as well [in Russia], would no doubt perceive this as a sort of neo-isolation of our country in diametric opposition to its natural admission into Euro-Atlantic space.”

Ukraine’s intent to seek a Nato Membership Action Plan following the 2008 Nato Bucharest summit led the Russian foreign ministry to declare that “a radical new expansion of Nato may bring about a serious political-military shift that will inevitably affect the security interests of Russia,” which would require Russia taking what it called “appropriate measures” in response. William Burns, the US ambassador to Russia at that time, noted, “While Russian opposition to the first round of Nato enlargement in the mid-1990s was strong, Russia now feels itself able to respond more forcefully to what it perceives as actions contrary to its national interests.”

If the twin Russian draft treaties were not, in fact, a negotiating ploy, but rather a stark statement of Russia’s position, then the invasion of Ukraine is just the start of a larger move by Moscow to pressure Nato and the US to eventually accede to its demands. This possibility was alluded to by the chairman of the US Joint Chiefs of Staff, Gen. Mark Milley, in comments to CNN recently: “What’s at stake is the security of Europe,” he said, with a potential Russian victory representing “the greatest challenge to the security of Europe since the end of World War II.”

US Defense Secretary Lloyd Austin, following a visit to Ukraine last month with Secretary of State Antony Blinken, signaled to reporters that the US would not roll over for Russia. The US, Austin said, wants “to see Russia weakened to the degree that it can’t do the kinds of things that it has done in invading Ukraine.” Austin’s comments were echoed by a National Security Council spokesperson, who declared that the US goal was “to make this invasion a strategic failure for Russia.”

The newly reinvigorated US strategy seeks to combine massive arms transfers — US President Joe Biden just authorized $33 billion in military and other aid for Ukraine — with sanctions and export controls to target Russia’s economy and defense industry in a manner that both weakens its ability to sustain the ongoing conflict and prevents future military aggression against Russia’s neighbors. The US Congress has also chimed in with a modern-day version of World War II’s “Lend-Lease” aid program, providing another channel for the rapid provision of modern weapons to the Ukrainian military.

But if Russia completes its conquest of the Donbas, it will be free to expand operations to the south, including the vital port city of Odessa. This could not only create a southern Crimean land bridge, but allow its extension to the breakaway territory of Transnistria — a sliver of land between Ukraine and Moldova where 200,000 of its estimated 500,000-strong population hold Russian passports, and where 98% voted in favor of independence and potential integration with Russia in a 2006 referendum.

The Russian-Ukrainian conflict has taken on a life of its own, with neither side willing to back down from what they view as existential interests. Currently, the advantage appears to lie with Russia — but the geopolitical calculus in Europe can change at the drop of a hat, with the possibility of Finland and Sweden joining Nato, Poland intervening in western Ukraine on humanitarian grounds, or Ukraine pre-emptively attacking Transnistria to divert Russian attention. All of these threaten to escalate the situation into a wider conflict. While predicting any specific outcome is problematic, one thing is for certain: Europe is in for a long, hot summer, dominated by war.