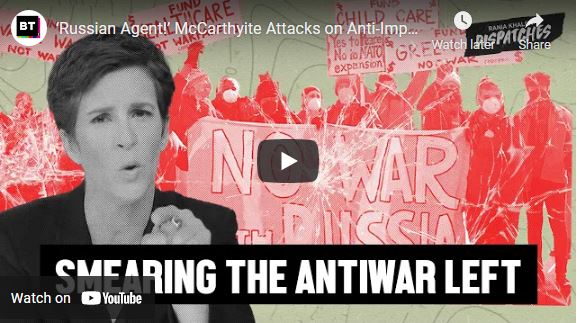 Mainstream media are whipping up a frenzy against leftists who oppose US imperialism and NATO, smearing them as “Russian agents” for trying to analyze this conflict and its causes with nuance rather than emotion or jingoism.

With Western media exclusively focused on Ukraine, simply reminding people that Afghanistan is being starved due to U.S. policies, that Yemen is still being bombed and besiged, and that Syria, Cuba, Iran and Venezuela are still being sanctioned leads to accusations of “whataboutism.” And daring to point out the NATO and US role in setting the stage for Russia’s intervention in Ukraine gets one labeled a “Russian apologist.”

To discuss these challenges, Rania Khalek was joined by Justin Podur,a Professor in Environmental and Urban Change at York U in Toronto, author of “Siegebreakers,” and host of The Anti-Empire Project podcast.

The West Provoked A Surge Of Russophobia And A “Witch Hunting”

They’re Enslaving Our Minds And Driving Us Toward Destruction