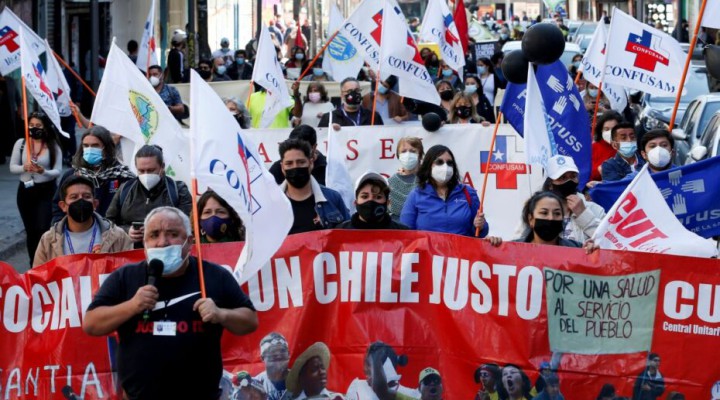 Rewriting the constitution provides the opportunity to address the imbalance that has ravaged Chile and created a society where profit has silenced dignity and human rights for decades.

Social inequalities have plagued Chile and become entrenched since the dictatorship of Augusto Pinochet, whose economic policies based upon the neoliberal model have remained unchallenged until now. In October 2019, protests triggered by an increase in bus fares swiftly became a call for social and political justice – the people were not protesting about the price hike, but an unsustainable economic model which the transition to democracy in Chile not only failed to challenge, but made sure to protect. Neoliberalism in Chile had ensured the Concertación governments would function as democratically elected bodies supported by dictatorship legacies, and for several decades, the center-left and right wing governments ruled unhindered.

Chilean President Sebastian Piñera’s ruthless tactics to quell protests enacted the horrors of the dictatorship in the streets under democratic rule, with similar violence unleashed against demonstrators. Meanwhile the government attempted to quell the nation-wide anger by making some concessions while still protecting the neoliberal agenda. For the first time since the dictatorship, underrepresented Chileans have the opportunity to become visible and active participants in a democratic process which the transition since the end of the dictatorship until recently failed to deliver.

For Piñera and Chile’s right wing, including institutions such as the military and multinational companies which so far have benefited from privatisation, the new constitution will provide a thorough reckoning.

Chile’s dictatorship past is still held hostage by state institutions such as the military, which refuses to cooperate with the judiciary in terms of divulging details regarding human rights violations, torture, killings and disappearances during Pinochet’s era. As seen in the 2019 protests, the military has not changed its tactics. With impunity still governing Chile’s armed forces, the protestors were targeted with violence, mass arrests and disappearances, while Piñera attempted to hold on not only to his role, but to the entire neoliberal set-up that propped Chile’s semblance of democracy.

In Chile, social inclusion is anathema to the elitist right-wing. The new constitution will usher in many political ruptures when it comes to the monopoly over profit. The meagre results obtained by the government will ensure it is powerless to block proposals that run contrary to its politics, which indicates that Chile is well on its way not only for a constitution rewrite, but to end the impunity which has characterised the country’s politics since the democratic transition. The implications have not been lost on Piñera, who advised against “extreme changes” which could alter perceptions of Chile’s economic stability.

Gabriel Boric from Frente Amplio, however, was adamant that the constitution should provide “a new treaty for our Indigenous populations, to recover our natural resources, build a state that guarantees universal social rights.”

If Pinera is so concerned about the forthcoming changes, his rhetoric about the new constitution providing “a great opportunity” towards inclusivity and sustainability ring hollow. The election results have dealt a severe blow to the right-wing and its associations with Pinochet, which have largely guided and strengthened neoliberalism in Chile to the detriment of its growing multitudes of victims. Economic growth in Chile has exploited the working class and the indigenous, thus providing a false reflection of Chilean society and its inequalities. Rewriting the constitution provides the opportunity to address the imbalance that has ravaged Chile and created a society where profit has silenced dignity and human rights for decades.