HOME / WORLD / The Need for Accountability Over Impunity in Chile 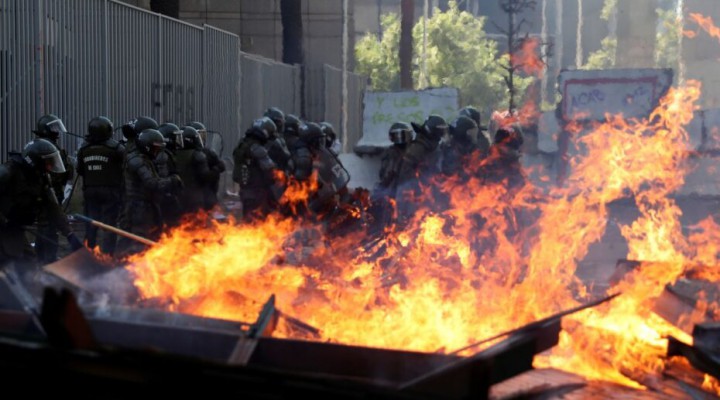 With a new constitution, Chilean state actors should be held accountable to the people’s demands for democratic changes in the country, otherwise Chile’s long-standing democratic tradition risks being lost to the dynamics of state violence.

While Chileans are still awaiting the process of a new constitution to end Augusto Pinochet’s dictatorship legacy in the country, police brutality is in the spotlight for two reasons – the increase in violence since the start of the protests in 2019, which turned into organised social demonstrations clamouring for change, and the calls to dissolve the Carabineros.

Earlier this month, the Chilean military police killed Francesco Martinez, a 27-year old street artist, after he failed to comply with an identity check, in Panguipulli. Demonstrators calling for justice attacked the municipal buildings, prompting the government to convene an emergency meeting. Judge Felipe Munoz determined an excess use of force by the police and called for an investigation into the lethal shooting.

In another case that sparked allegations of police violence, Camilo Miyaki was found hanged in a cell where he was being held over non-compliance with road safety rules. Miyaki was detained at Pedro Aguirre Cerda police station and placed in isolation without security cameras, in a building that has become notorious for its human rights abuses and violations since the 2019 protests.

For a brief while, international media highlighted the excesses of Chilean police violence, in particular the wilful shooting of rubber bullets in the protestors’ eyes, causing blindness and serious eye injuries. Chile’s National Institute of Human Rights deemed the ongoing wave of violence to be “the most serious” since the country’s transition to democracy, calling out the government on its partiality for safeguarding the perpetrators’ impunity, rather than seeking truth and justice.

Following the most recent violence, political leaders called for Chilean President Sebastian Pinera to resign for his role in protecting the Carabineros. The Chilean Communist Party called for a complete reforming of the Carabineros and for the government to take responsibility, stating that Pinera’s legacy is one of “repeated human rights violations.” In the early days of the protests, which saw large cities in Chile placed under military curfew, many Chileans equated the violence unleashed by the police with dictatorship violence, with some calling the scenes “a return to the dictatorship.”

Amnesty International’s report on Chilean police violence since 2019 notes that the commanders knew about the violence but failed to take action to stop the violations, despite close monitoring by officials and reports submitted by human rights organisations.

Chile has so far managed to escape scrutiny by focusing on rights rhetoric, rather than the violent legacy which leaders after the dictatorship have not only failed to address, but adapted into its strategies for control.

Pinera had described the referendum for a new Chilean constitution as an opportunity “to leave behind the violence and divisions we have seen resurface with pain and sadness in recent days.”

However, Pinera’s statement is inaccurate. The protests and the Carabineros’ response – kill but don’t protect civilians – sheds light on Chilean society and how much it is still ruled through violence, knowing that there is little recourse for the victim. Environmental activists have been found dead in Chile in suspicious circumstances that point towards the state institutions’ intimidation and involvement. With a democracy that is still battling its dictatorship horrors, and seeking to uncover the truth about human rights violations that occurred during the Pinochet era, Chilean society has much to deal with.

The representatives which will be elected in April this year to draft the new constitution have a responsibility towards the people to eliminate the neoliberal policies that have championed state violence through repression and social inequalities. At last, there will be an opportunity for Chileans to look at state repression as a whole, rather than isolated acts each eclipsed by the next violation. Police violence is no exception. With a new constitution, Chilean state actors should be held accountable to the people’s demands for democratic changes in the country, otherwise Chile’s long-standing democratic tradition, tarnished by the dictatorship and the transition, risks being lost to the dynamics of state violence.

0 thoughts on “The Need for Accountability Over Impunity in Chile”