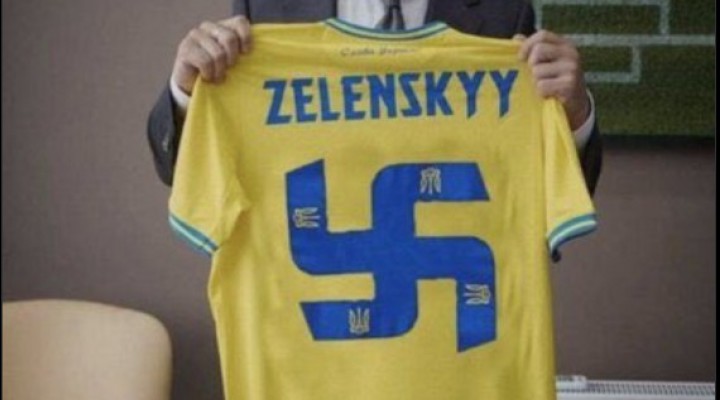 The neocons and their allies might be making it happen

Well, the genie is well and truly out of the bottle and there is no easy way to encourage it to return. Thanks to a relentless flow of propaganda, the American public has become increasingly convinced that the United States “looks weak” and must stand up against Vladimir Putin. Richard Haass of the Council on Foreign Relations is now calling for “regime change” in Russia while Senator Robert Wicker and Congressman Adam Kinzinger as well as several former Joint Chiefs of Staff generals are demanding that the United States establish a “no fly zone” over Ukraine, which would require US destruction of Russia’s air defense capabilities and shooting down of Russian planes among other measures. If that were to occur the war could quickly turn nuclear. Other media and government “experts” are speculating that Russian President Vladimir Putin is insane with much of the other disinformation coming from Russia haters like Bill Browder and former Ambassador Michael McFaul. But FOX news commentator Sean Hannity possibly wins the hate race, calling for the assassination of Putin because has he has “forfeited his right to live,” a view also shared by Senator Lindsey Graham.

Former GOP Vice President Mike Pence has called for anyone supporting Russia to be kicked out of the party which will no doubt produce a purge of members who are reluctant to go to war on behalf of foreign country and no ally Ukraine. Meanwhile a completely deranged Senator Mitt Romney has described anyone speaking up for Russia as “almost treasonous,” suggesting that Romney would benefit from looking up the definition of “treason” in the US Constitution. And the completely looney-tunes televangelist Pat Robertson is warning that Russia attacked Ukraine but the real target is Israel, which will result in a great war and Armageddon leading to the “End Times” when the world will end and all true believers will be raptured up to heaven.

But other more stable folks are making two basic arguments to justify the increasing engagement of Washington in the fighting. The first is the vague claim that what Ukraine versus Russia is all about is the maintenance of “freedom and democracy” in Europe. That is generally how President Joe Biden and other politicians describe it since it does not require any further explanation or discussion. The other argument is rather an elaboration of that, claiming that there was some kind of post-Second World War consensus that aggressive war to acquire someone else’s land should be condemned by all nations and steps should be taken to contain and repress any such activity. This led to the creation of the United Nations.

The problem is that neither justification for involving the US in a conflict where it is not actually threatened requires something more substantial given the danger of escalation of the fighting to the point where the world’s two leading nuclear powers would find themselves going head-to-head. And there is the little matter of history to reckon with, which tells us that not everything taking place can be reduced to such simplistic terms to justify taking action. The status quo in eastern Europe is a consequence of the break up of the Soviet Union in 1991-2 and, beyond that, of the configuration of the Russian Empire of the Tsars that preceded communism. Ukraine itself has had its borders adjusted numerous times.

Currently, the Ukrainian government of President Volodymyr Zelenskyy is seeking to broaden the conflict with Russia by attempting to join the European Union while also calling for weapons as well as direct military intervention from NATO. He has called for volunteers to join the fight as a “foreign legion” and has also contacted Israeli Prime Minister Naftali Bennett and suggested that Bennett persuade Putin to participate in peace talks in Jerusalem. There has also been a less conciliatory appeal to world Jewry to join in on the attack directed against Moscow’s economy. In a video circulated among Jewish international organizations Zelenskyy said “Don’t you see what is happening? That is why it is very important that millions of Jews around the world not remain silent right now. Nazism is born in silence.”

There is also more than a measure of hypocrisy in the Biden Administration taking the lead on punishing Russia for aggression. The United States has gone to war with a non-threatening Vietnam and has destroyed governments and engaged in completely illegal military occupations of Afghanistan, Iraq, Somalia, Libya and Syria. It has assassinated senior officials from Iran. It has not been punished for any of those actions. Its ally Israel bombs Syria on nearly a daily basis, engages in assassinations, kills Palestinian children, and annexes Arab land that it has obtained by force on the Golan Heights and West Bank, dispossessing the original inhabitants. When that happens, the US Congress and White House look the other way. All the Israeli war crimes as well as those being carried out by the Saudis against Yemen’s Houthis have been endorsed by the successive Bush, Obama, Trump and now the Biden administrations.

Beyond that, Ukraine is no democracy. The nation’s current government came into power after the 2014 coup engineered by President Barack Obama’s State Department at an estimated cost of $5 billion. The regime change was driven by State Department Russophobe Victoria Nuland with a little help from international globalist George Soros. It removed the democratically elected President Viktor Yanukovych who was unfortunately for him a friend of Russia. Ukraine is reputedly both the poorest and most corrupt country in Europe, witness the Hunter Biden saga. Zelenskyy who is Jewish and claims to have holocaust victims in his family tree is a former comedian who won election in 2019. He replaced another Jewish president Petro Poroshenko, after being heavily funded and promoted by yet another fellow Jew and Ukraine’s richest oligarch Ihor Kolomoyskyi, who is also an Israeli citizen and lives in Israel. As an entertainer, one of Zelenskyy’s musical acts consisted of his playing a piano with his penis, suggesting that Ukrainian humor has some unique characteristics.

After the election of the post-coup new model Ukrainian government in 2014, opposition parties were declared illegal and some leaders were arrested for “treason,” the media was censored and the parliament outlawed Russian, the language of a third of the population, as an official language. Then the government declared war on the predominantly Russian Eastern provinces and, for past eight years, has killed 14,000 people.

I keep asking myself, why do Washington policymakers and the media who should know better give so much of a damn about Ukraine? It is of no strategic value to the United States and Russian demands were both reasonable and negotiable. So the claims that Ukraine’s defense is intended to keep Europe democratic and free is just so much window dressing to justify waging economic war on Russia. And, in any event, American hypocrisy is clearly visible regarding the Kremlin’s possible intention to annex a couple of heavily Russian Ukrainian regions. It is not in any way worse than what Israel has been doing in Jerusalem, on the West Bank and on the Golan Heights, all endorsed by successive US administrations. So what’s it all really about?

After considering the parallels with Israel, it then occurred to me that maybe there was the usual angle, meaning that it was all about “protecting” Jews, the argument that succeeds in Washington where all else fails and makes the Bidens, Blinkens, Pelosis and Schumers stand up and salute. Even a befuddled Donald Trump has seen the light and is now calling the Russian intervention a “holocaust” and is joking about false-flagging US F-22 fighter bombers as Chinese and “bombing the shit out of Russia.” The Jewish media is also showering Zelenskyy with praise, referring to him as a genuine “Jewish hero,” a modern Maccabee resisting oppression, a David versus Goliath. T-shirts bearing his image are being sold that read “Resisting tyrants since Pharaoh” while the Jewish community in New York City is raising millions of dollars for Ukrainian aid.

The Jewish Telegraphic Agency reports that a “2020 demographic survey estimated that besides a ‘core’ population of 43,000 Jews, around 200,000 Ukrainians are technically eligible for Israeli citizenship, meaning that they have identifiable Jewish ancestry. The European Jewish Congress says that number could be as high as 400,000.” If that is true, it is one of the largest Jewish communities in the world and it includes at least 8,000 Israelis, many of whom are trying to return to Israel. Other Ukrainian Jews are also fleeing the country.

Israel, with close ties to both nations through the Jewish diaspora, has been attempting to play both sides, offering support to Ukraine while also not condemning Russia. Its Prime Minister Naftali Bennett is increasingly playing the role of mediator between the two adversaries, having met with Putin and spoken several times with Zelenskyy. Jews, some of whom have Israeli citizenship, are, in fact, disproportionately represented among the so-called oligarchs in both countries, controlling key sectors of the respective economies. Several Russian Jewish oligarchs have already fled on their superyachts to ports providing non-extradition in an attempt to preserve their assets from US and European sanctions directed against Moscow’s economy.

So there appears to be a Jewish/Israeli story that is part and parcel of what is going on in Ukraine. It has long been recognized by many that a particular antipathy directed against Russia permeates the neocon world view. Most neocons are Jewish and a number of them are running the State Department while also holding high level positions elsewhere in the Biden Administration as well as in the foreign policy think tanks, including Haass at the influential Council on Foreign Relations. Likewise, the intensely Russophobic US and Western media and social networking sites are disproportionately Jewish in their ownership and staffing. As US-Russian negotiations leading up the current fighting were clearly designed to fail by the Biden Administration, one has to wonder if this war is largely a product of a long enduring ethno-religious hatred. I am speculating of course, but there is even some historical evidence to support such a view in the Iraq invasion and the hostility towards Iran, both of which have been and continue to be driven by Israeli interests, not those of the United States. Is Russia the enemy a similar contrivance? It has to be considered…

Hillary Clinton Wants a Repeat of Afghanistan-Style Insurgency in Ukraine

Ukraine Is A Sacrificial Pawn On The Imperial Chessboard

2 thoughts on “Who Wants War with Russia?”