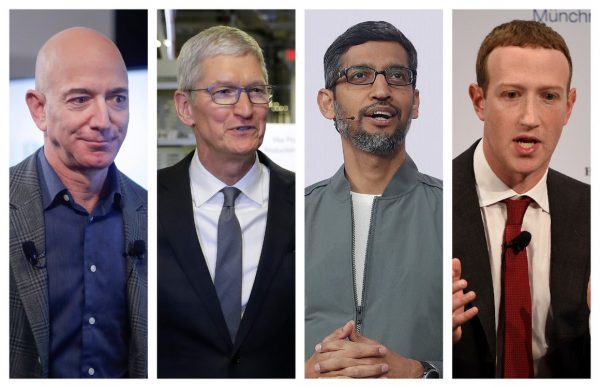 Corporations and government use internet to control information

Some Americans continue to believe that when they go to the internet they will get a free flow of useful information that will guide them in making decisions or coming to conclusions about the state of the world. That conceit might have been true to an extent twenty years ago, but the growth and consolidation of corporate information management firms has instead limited access to material that it does not approve of, thereby successfully shaping the political and economic environment to conform with their own interests. Facebook, Google and other news and social networking sites now all have advisory panels that are authorized to ban content and limit access by members. This de facto censorship is particularly evident when using the internet information “search” sites themselves, a “service” that is dominated by Google. Ron Unz has observed how when the CEO of Google Sundar Pichai faced congressional scrutiny on July 29th together with other high-tech executives, the questioning was hardly rigorous and no one even asked how the sites are regulated to promote certain information that is approved of while suppressing views or sources that are considered to be undesirable.

The “information” sites generally get a free pass from government scrutiny because they are useful to those who run the country from Washington and Wall Street. That the internet is a national security issue was clearly demonstrated when the Barack Obama Administration sought to develop a switch that could be used to “kill it” in the event of a national crisis. No politician or corporate chief executive wants to get on the bad side of Big Tech and find his or her name largely eliminated from online searches, or, alternatively, coming up all too frequently with negative connotations.

Google, for example, ranks the information that it displays so it can favor certain points of view and dismiss others. Generally speaking, progressive sites are favored and conservative sites are relegated to the bottom of the search with the expectation that they will not be visited. In late July, investigative journalists noted thatGoogle was apparently testing its technical ability to blacklist conservative media on its search engine which processes more than 3.5 billion online searches every day, comprising 94 percent of internet searching. Sites targeted and made to effectively disappear from results included NewsBusters, the Washington Free Beacon, The Blaze, Townhall, The Daily Wire, PragerU, LifeNews, Project Veritas, Judicial Watch, The Resurgent, Breitbart, Drudge, Unz, the Media Research Center and CNSNews. All the sites affected are considered to be politically conservative and no progressive or liberal sites were included.

One has to suspect that the tech companies like Google are working hand-in-hand with some regulators within the Trump administration to “purge” the internet, primarily by removing foreign competition both in hardware and software from countries like China. This will give the ostensibly U.S. companies monopoly status and will also allow the government to have sufficient leverage to control the message. If this process continues, the internet itself will become nationally or regionally controlled and will inevitably cease to be a vehicle for free exchange of views. Recent steps taken by the U.S. to block Huawei 5G technology and also force the sale of sites like TikTok have been explained as “national security” issues, but they are more likely designed to control aspects of the internet.

Washington is also again beating the familiar drum that Russia is interfering in American politics, with an eye on the upcoming election. Last week saw the released of a 77 page report produced by the State Department’s Global Engagement Center (GEC) on Russian internet based news and opinion sources that allegedly are guilty of spreading disinformation and propaganda on behalf of the Kremlin. It is entitled “Understanding Russia’s Disinformation and Propaganda Ecosystem” and has a lead paragraph asserting that “Russia’s disinformation and propaganda ecosystem is the collection of official, proxy, and unattributed communication channels and platforms that Russia uses to create and amplify false narratives.”

Perhaps not surprisingly, The New York Times is hot on the trail of Russian malfeasance, describing the report and its conclusions in a lengthy article “State Dept. Traces Russian Disinformation Links” that appeared on August 5th.

The government report identifies a number of online sites that it claims are actively involved in the “disinformation” effort. The Times article focuses on one site in particular, describing how “The report states that the Strategic Culture Foundation [website] is directed by Russia’s foreign intelligence service, the S.V.R., and stands as ‘a prime example of longstanding Russian tactics to conceal direct state involvement in disinformation and propaganda outlets.’ The organization publishes a wide variety of fringe voices and conspiracy theories in English, while trying to obscure its Russian government sponsorship.” It also quotes Lea Gabrielle, the GEC Director, who explained that “The Kremlin bears direct responsibility for cultivating these tactics and platforms as part of its approach of using information and disinformation as a weapon.”

As Russia has been falsely accused of supporting the election of Donald Trump in 2016 and the existence of alternative news sites funded wholly or in part by a foreign government is not ipso facto an act of war, it is interesting to note the “evidence” that The Times provides based on its own investigation to suggest that Moscow is about to disrupt the upcoming election. It is: “Absent from the report is any mention of how one of the writers for the Strategic Culture Foundation weighed in this spring on a Democratic primary race in New York. The writer, Michael Averko, published articles on the foundation’s website and in a local publication in Westchester County, N.Y., attacking Evelyn N. Farkas, a former Obama administration official who was running for Congress. In recent weeks, the F.B.I. questioned Mr. Averko about the Strategic Culture Foundation and its ties to Russia. While those attacks did not have a decisive effect on the election, they showed Moscow’s continuing efforts to influence votes in the United States…”

Excuse me, but someone writing for an alternative website with relatively low readership criticizing a candidate for congress does not equate to the Kremlin’s interfering in an American election. Also, the claim that the Strategic Culture Foundation is a disinformation mechanism is overwrought. Yes, the site is located in Moscow and it may have some government support but it features numerous American and European contributors in addition to Russians. I have been writing for the site for nearly three years and I know many of the other Americans who also do so. We are generally speaking antiwar and often critical of U.S. foreign policy but the contributors include conservatives like myself, libertarians and progressives and we write on all kinds of subjects.

And here is the interesting part: not one of us has ever been told what to write. Not one of us has ever even had a suggestion coming from Moscow on a good topic for an article. Not one of us has ever had an article or headline changed or altered by an editor. Putting on my ex-intelligence officer hat for a moment, that is no way to run an influencing or disinformation operation intended to subvert an election. Sure, Russia has a point of view on the upcoming election and its managed media outlets will reflect that bias but the sweeping allegations are nonsense, particularly in an election that will include billions of dollars in real disinformation coming from the Democratic and Republican parties.

Putting together what you no longer can find when you search the internet with government attempts to suppress alternative news sites one has to conclude that we Americans are in the middle of an information war. Who controls the narrative controls the people, or so it seems. It is a dangerous development, particularly at a time when no one knows whom to trust and what to believe. How it will play out between now and the November election is anyone’s guess.

0 thoughts on “Managing the Narrative”