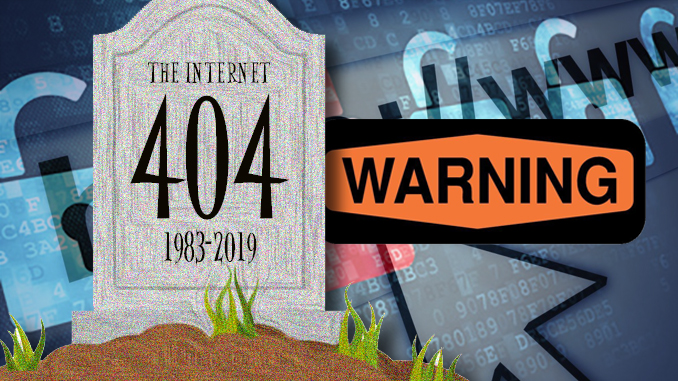 Unelected, unnamed censors are operating across the Internet to suppress “unapproved” content.

The Internet was originally promoted as a completely free and uncensored mechanism for people everywhere to exchange views and communicate, but it has been observed by many users that that is not really true anymore. Both governments and the service providers have developed a taste for controlling the product, with President Barack Obama once considering a “kill switch“ that would turn off the Internet completely in the event of a “national emergency.”

President Donald Trump has also had a lot to say about fake news and is reported to be supporting limiting protections relating to the Internet. In May, a “net neutrality” bill that would have prevented service providers from manipulating Internet traffic passed in the House of Representatives, but it is reported to be “dead on arrival” in the Senate, so it will never be enacted.

Social networking sites have voluntarily employed technical fixes that restrict some content and have also hired “reviewers” who look for objectionable material and remove it. Pending European legislation, meanwhile, might require Internet search engines to eliminate access to many unacceptable old posts. YouTube has already been engaged in deleting existing old material and is working with biased “partners” like the Anti-Defamation League (ADL) to set up guidelines to restrict future content. Many users of Facebook will have already undoubtedly noted that some contacts have been blocked temporarily (or even permanently) and denied access to the site.

Google now automatically disables or limits searches for material that it deems to be undesirable. If Google does not approve of something it will either not appear in search results or it will be very low on the list. And what does come up will likely favor content that derives from those who pay Google to promote their products or services. Information that originates with competitors will either be very low in the search results or even blocked. Google is consequently hardly an unbiased source of information.

In May 2017 Facebook announced that it would be hiring 3,000 new censors, and my own experience of social networking censorship soon followed. I had posted an article entitled “Charlottesville Requiem” that I had written for a website. At the end of the first day, the site managers noticed that, while the article had clearly attracted a substantial Facebook readership, the “likes” for the piece were not showing up on the screen counter, i.e., were not being tabulated. It was also impossible to share the piece on Facebook, as the button to do so had been removed.

The “likes” on sites like Facebook, Yahoo! news comments, YouTube, and Google are important because they automatically determine how the piece is distributed throughout the site. If there are a lot of likes, the piece goes to the top when a search is made or when someone opens the page. Articles similarly can be sent to Coventry if they receive a lot of dislikes or negative marks, so the approvals or disapprovals can be very important in determining what kind of audience is reached or what a search will reveal.

In my case, after one day my page reverted to normal, the “likes” reappeared, and readers were again able to share the article. But it was clear that someone had been managing what I had posted, apparently because there had been disapproval of my content based on what must have been a political judgment.

A couple of days later, I learned of another example of a similar incident. The Ron Paul Institute (RPI) website posts much of its material on YouTube (owned by Google) on a site where there had been advertising that kicked back to RPI a small percentage of the money earned. Suddenly, without explanation, both the ads and rebate were eliminated after a “manual review” determined the content to be “unsuitable for all advertisers.” This was a judgment rendered apparently due to disapproval of what the institute does and says. The ability to comment on and link from the pieces was also turned off.

Dissident British former diplomat Craig Murray also noted in April 2018 the secretive manipulation of his articles that are posted on Facebook, observing that his “site’s visitor numbers [were] currently around one-third normal levels, stuck at around 20,000 unique visitors per day. The cause [was] not hard to find. Normally over half of our visitors arrive via Facebook. These last few days, virtually nothing has come from Facebook. What is especially pernicious is that Facebook deliberately imposes this censorship in a secretive way.

The primary mechanism when a block is imposed by Facebook is that my posts to Facebook are simply not sent into the timelines of the large majority of people who are friends or who follow. I am left to believe the post has been shared with them, but in fact it has only been shown to a tiny number. Then, if you are one of the few recipients and do see the post and share it, it will show to you on your timeline as shared, but in fact the vast majority of your own friends will also not receive it. Facebook is not doing what it is telling you it is doing—it shows you it is shared—and Facebook is deliberately concealing that fact from you. Twitter has a similar system known as ‘shadow banning.’ Again, it is secretive and the victim is not informed.”

More recently, pressure to censor Internet social networking and information sites has increased, coming both from government and from various interested constituencies. In late May, Facebook founder and CEO Mark Zuckerberg met with French President Emmanuel Macron to discuss how to eliminate “hate speech” on the Internet. The two men agreed that the United States Internet model, in spite of already being heavily manipulated, is too laissez faire, and expressed an interest in exploring the French system where it is considered acceptable to ban unacceptable points of view. Zuckerberg suggested that it might serve as a good model for the entire European Union. France is reportedly considering legislation that establishes a regulator with power to fine Internet companies up to 4% of their global revenue, which can in some cases be an enormous sum, if they do not curb hateful expressions.

So unelected, unnamed censors are operating all around the Internet to control the content, which I suppose should surprise no one, and the interference will only get worse as both governments and service providers are willing to do what it takes to eliminate views that they find unacceptable—which, curiously enough, leads one to consider how “Russiagate” came about and the current hysteria being generated in the conventional media and also online against both Venezuela and Iran. How much of the anger is essentially fake, being manipulated or even fabricated by large companies that earn mega billions of dollars by offering under false pretenses a heavily managed product that largely does what the government wants? Banning hate speech will be, unfortunately, only the first step in eliminating any and all criticisms of the status quo.

Goodbye to the Internet: Interference by Governments Is Already Here

0 thoughts on “Internet Free Speech All But Dead”