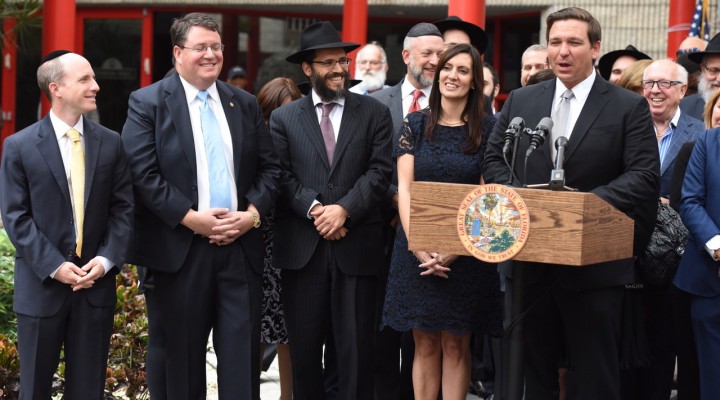 Ron DeSantis, Florida’s new governor, should be really proud of himself. He recently recalled that when he ran for governor “…[he] promised to be the most pro-Israel governor in America and that the first delegation [he] would lead would be to the state of Israel.” When he confirmed that he would be taking his entire cabinet with him as part of a 75-person delegation scheduled to leave for Israel on May 25th, he boasted that “Today I’m pleased to report that I’m keeping that promise. Our delegation will bring business, academic and political leaders to help strengthen the bond between Florida and Israel.” DeSantis has promised to hold a meeting of his Cabinet in the American Embassy in Jerusalem during his visit, the first time that such a meeting has ever been held by a state government on foreign soil. During the meeting he will ostentatiously sign a legislative bill “combating anti-Semitism.”

DeSantis has been playing the Israel and anti-Semitism cards throughout his political career. Last year, as a Congressman running for governor, he attacked his opponent Tallahassee Mayor Andrew Gillum during their gubernatorial race as not being a “friend of Israel.” He based his charge on reports that Gillum had received support from the Dream Defenders, a group favoring Boycott, Divestment, and Sanctions (BDS) against Israel, as well as once having given a speech welcoming members of the Council on American-Islamic Relations (CAIR) to his city. DeSantis claimed in a video clip that “I can find anti-Semites around him, but it’s almost like ‘we don’t want to discuss that.’”

As a Congressman, DeSantis sponsored in 2013 the Palestinian Accountability Act which called for the withholding of U.S. aid to the Palestinian Authority until it recognizes Israel as a Jewish state. In 2017, he co-foundedthe Congressional Israel Victory Caucus, saying “Israel is our strongest ally in the Middle East, as we share common national interests and possess similar national values. Israel is not the problem in the Middle East; it is the solution to many of the problems that bedevil the region. American policy must ensure that Israel emerges victorious against those who deny or threaten her existence.” Earlier this year, DeSantis drafted a proposal calling on the U.S. to recognize Syria’s Golan Heights as an ‘integral part’ of the State of Israel.

DeSantis boasted about his presence in Jerusalem when the U.S. Embassy was moved to that city one year ago and has promised that on his upcoming trip he will visit Israel’s illegal settlements on the West Bank, which he refers to by the preferred Israeli usage as “Judea and Samaria.” He has threatened critics that “If you boycott Israel, the state of Florida will boycott you” and threatened to “sanction” the holiday rental company Airbnb when it refused to offer properties located in the illegal Israeli settlements on the West Bank. DeSantis was also the driving force behind recently enacted legislation in his state to punish BDS supporters. The legislation is regarded as the most extremeamong U.S. states, including explicit equation of criticism of Israel with anti-Semitism. Another bill pending in Florida will enable citizens to sue teachers or government employees who in any way criticize Israel.

DeSantis, a former U.S. Navy lawyer, has demonstrated that he reveres Israel even more than his former comrades in arms. In his congressional district there were a number of survivors of the U.S.S. Liberty, which was attacked in international waters by Israel on June 8, 1967, killing 34 crewmen and injuring 171 more. They report that DeSantis has been completely unsympathetic to their requests that a commission of inquiry finally be convened to determine what actually happened on that day.

Regarding the upcoming visit, a local Florida radio station conducted an interview with Israeli Consul General in Miami Lior Haiat, who emphasized the economic benefits to be derived from the strong bilateral relationship, who said “The fact that the huge delegation is going from Florida to Israel is just a symbol that the outcome of this delegation will be seen in the relationship between Israel and Florida for years to come. Because this is just the beginning. We’re signing over 10 memorandums of understandings and agreements between Israeli companies and universities and the Floridian companies and universities. This is a huge bridge that Gov. DeSantis is building. We are happy to be part of it.”

Consul General Haiat also noted that “There is a lot of new technology based in Israel that is very relevant to Florida both on the red tide and algae, and we are already connecting Israeli companies with local authorities in able to find what is the most useful technology for that part.  But it’s also for the greening of oranges. This is a huge problem here. I think that the connection between Israel and Florida has a lot of potential since Israel has a lot of agricultural technology based on knowledge, and Florida has a huge sector of agriculture that can use that technology.”

The six days De Santis led boondoggle in Israel is funded by taxpayers. A public records request filed by a local newspaper seeking information on how much the trip would cost has not been responded to by the governor’s office. And the idea that the state of Florida and its citizens will benefit materially from the trip is largely an illusion. This mixing of politics and business interests is essentially corrupt and inevitably leads to abuses that do not serve the public interest, particularly as American citizens who stand to benefit both, directly and indirectly, are quite openly promoting the interests of a foreign nation.

The Florida trip is a perfect example of how Israel’s friends go about setting up mechanisms that will benefit the Jewish state. Israel will be selling its products and services to Florida, enabled by a government in place that is promoting the process and will steer contracts in its direction. In return, Florida will get little or nothing as Israel is a tiny market and has no particular need of anything that the Sunshine State produces.

All such trade agreements are designed to enrich Israel. The 1985 United States free trade agreement with Israel has benefitted the Jewish state by $144 billion, which is the U.S. deficit on the trade between 1985 and 2015. An interesting example of how this works at the state level and the abuse that it can produce has recently surfaced in Virginia, where a so-called Virginia-Israel Advisory Board (VIAB) has actually been funded by the Commonwealth of Virginia taxpayers to promote and even subsidize Israeli business in the state, business that currently runs an estimated $500 million per annum in favor of Israel. Grant Smith’s Institute for Research: Middle Eastern Policy (IRMEP) has done considerable digging into the affairs of VIAB, which was ostensibly “created to foster closer economic integration between the United States and Israel while supporting the Israeli government’s policy agenda” with a charter defining its role as “advis[ing] the Governor on ways to improve economic and cultural links between the Commonwealth and the State of Israel, with a focus on the areas of commerce and trade, art and education, and general government.” Smith has observed that “VIAB is a pilot for how Israel can quietly obtain taxpayer funding and official status for networked entities that advance Israel from within key state governments.”

Florida does not yet have an equivalent of Virginia’s VIAB, but it probably does not need one as the pandering to Israel will be run right out of the governor’s office. So if you want to create jobs and exports for a foreign country at a cost to your own citizens, by all means, follow the DeSantis Florida model and send an expensive trade mission over to Jerusalem to sing the praises of Benjamin Netanyahu and his band of war criminals while also promoting “buy Israel.” But just maybe it would be a better idea to stop shilling for a foreign country. Floridians should insist on keeping the travel money here at home where it might actually do some good while also putting a little pressure on DeSantis, who was elected to serve the people of his state, to stop his unseemly boasting about being the “most pro-Israel governor in America.”

There’s Something Rotten in Virginia: Israel Is a Malignant Force in Local Politics