HOME / SOCIAL/CULTURAL / The Reconquest: In 2022 elections, an Algerian Islamophobe wants to purge France from ‘the Muslim peril’

The Reconquest: In 2022 elections, an Algerian Islamophobe wants to purge France from ‘the Muslim peril’ 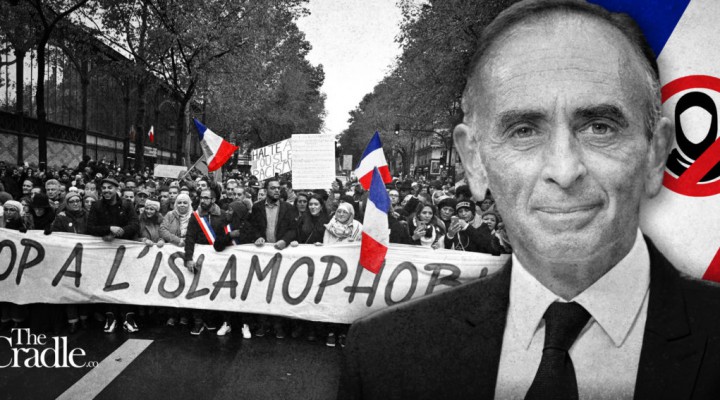 In sharp contrast with the morose political environment across Europe, the French presidential election – against all odds – is now set to become the most enthralling polls to watch in 2022.

Just when everyone from Normandy to the Cote d’Azur seemed all but resigned to suffer a second bout of Macronism, polemicist-turned-politician Eric Zemmour came up with a lurid plot twist.

It took him less than a week. On Monday, 29 November, Zemmour officially announced he would run in the elections. He played full De Gaulle, reading his own speech to the sound of Beethoven, and in front of an old-school microphone surrounded by books.

Then Zemmour announced the name of his new political party: ‘Reconquete’ – named after the seven century-long Christian battle to expel the Moors from Iberia, finally achieved in 1492.

For Zemmour and his eager acolytes, it’s all about reconquering France once again from the Muslim enemy.

Then, on Sunday, 5 December, he held his first rally as a candidate in front of over 10,000 people. No current French politician is able to draw such a crowd.

The next day’s headlines were all about uninvited protestors, one of whom lunged at Zemmour and held him in a headlock on his way to the podium, and scuffles between his supporters. But in Zemmour’s book, this was a triumph: stepping beyond his trademark, well-known incendiary proposals, he managed to transition from pundit to presidential hopeful overnight.

Now all bets are off. The Zemmour saga, of course, offers parallels with the rise of Trump in 2016, who also shifted from media to politics. It is rabidly anti-immigration, and pits fervent nationalism against what is described by conservatives across the west as ‘Islamo-leftism’.

Even in France, most people don’t know that the Zemmour presidential run started at a somewhat secret dinner in Paris last June.

The crème de la crème of the French establishment were there, including Count Henri de Castries, 66, a former luminary of the Ecole Nationale d’Administration (ENA), the alma mater of virtually everyone that counts in Parisian circles of power.

De Castries is a former CEO of insurance giant AXA, at the board of directors of Nestlé; president of the Bilderberg Club; and head of the corporate-financed think tank Institut Montaigne – which virtually ‘invented’ a certain Emmanuel Macron in 2017 after Francois Fillon, favorite to win the nomination for the Right, was destroyed by a leak over his wife’s dodgy employment duties.

If Fillon had won the presidential election in 2017, de Castries would have been Defense Minister.

The first: “We must prohibit non-French first names.”

The second:  “The central issue before us, for the next presidential election and the next 30 years, is Muslim immigration.”

It may have taken six months, but since last summer Zemmour’s irresistible ascension carried an aura of inevitability, even drawing attention from an anxious Elysée Palace, where functionaries duly noted that, on an ideological and cultural level, Zemmour was dictating the whole agenda of the French Right.

Bolloré, who is not a snotty Parisian but a ‘provincial’ from Britanny, was fascinated from the start by Zemmour’s social ascension – of the kind only found in sports or music. A similar journey in the intellectual sphere is virtually non-existent in hyper-coded France.

Zemmour comes from a Jewish Algerian family of modest means which settled in St Denis, a ‘hot’ Paris suburb. He built his persona – and his impact on the Paris beau monde – with Cartesian rationalism. Underneath it all lies an unmistakable class complex: he craves approbation from intelligentsia notables.

Zemmour is a complex character, but he is also usually reduced to his monothematic obsession: The ‘Muslim Peril.’ At the same time, he favors assimilation, and has nothing against Muslims who become full republicans.

Zemmour took some time to find his political niche. Les Republicans party – of former President Nicolas Sarkozy – is too soft and amorphous. Far-right superstar Marine Le Pen always collects 20 percent of votes in the first presidential round just to fail breaking the glass ceiling in the second (that’s one of the worst kept secrets in France; because of her fascist father, and because she’s not part of the elite).

Now, the financial elite has identified a golden path straight out of Lampedusa’s The Leopard (“everything must change so everything remains the same”). Macron remains their boy. Zemmour is being used – by ‘invisible’ banking donors – to outflank Marine Le Pen from the Right and allow Macron an easy re-election.

And even if Zemmour does not win in 2022, what matters is that Marine Le Pen will definitely be buried and the path will be open for a unified conservative movement closer to its cherished ‘values,’ led of course by Zemmour.

Zemmour, however, faces a very serious problem: how to enlarge his electorate beyond Trumpian angry white males. Trump was a billionaire and a communication beast, so that was easier. Zemmour is an awkward class defector who blossomed in the very small, incestuous Parisian media-literary milieu.

Inside the Zemmour family, identity was always a crucial theme of debate. General De Gaulle was the supreme entity – including his admiration of Jews, “sure of themselves and dominating.” Zemmour’s father, Roger, used to speak Arabic and play cards in the bars of the Goutte D’Or neighborhood.

Zemmour, a Berber family name, means ‘noisy horn’ in Arabic, while its derivative, Ezmour, is the name of the male olive tree in the Berber (Amazigh) language, mainly in Algeria. Zemmour always refers to himself as a Berber Jew. He refuses to be called an Arab, emphasizing that “the Berbers were colonized, massacred and persecuted by the Arabs, Islamized by force.”

And here we approach the heart of the enigma: Zemmour is essentially an Arabophobe, and very specifically against Arabs from the Maghreb. He never refers to Persian Gulf Arabs, and especially Wahhabis and Salafi-jihadis – denoting scarce knowledge of historical Islam and its perversions by western empires. He seems to be illiterate on Shia Islam in the arc of resistance, the Islam of Sufism in Central Asia, and the soft, tropical Islam of Indonesia.

In France, it’s taboo to openly discriminate against Arabs. That’s why Zemmour promoted ‘Islam’ as his portmanteau term to essentially demonize Arabs from the Maghreb.

A hero in a Balzac remix

To understand Zemmour, one must read Balzac. To his credit, Zemmour is a dying breed: a product of literary culture. He grew up buried in Alexandre Dumas and Balzac – the latter’s Lost Illusions is his ultimate reference.

Since he was 11, Zemmour pictured himself as Lucien de Rubempré, the hero of Lost Illusions: that’s when he decided he would become a journalist and author. The Balzacian masterpiece concentrates all his passions: history, journalism and literature. Rubempré is a poet who becomes a journalist and dreams of writing historical novels.

Of all of Balzac’s memorable heroes, Zemmour chose a seducer that overcompensates his modest, provincial origins by a tremendous panache. His critics, though sharply identify him with another Balzac character, Rastignac, the ultra-ambitious one who is obsessed with becoming wealthy and a government minister. That’s not exactly correct: Zemmour would rather linger in a perpetual blaze of glory instead of becoming just a cog in the bourgeois machine.

Seven years ago, way before Trump, there were already rumblings of a Generation Zemmour popping up in France: those who were feeling the heat when faced with the combined blitzkrieg of the European Union, immigration, and globalization.

This is the bulk of Zemmour’s electorate: bourgeois conservatives, victims of globalization, and the declassified popular classes, those who really lost with the globalist open borders. They offered Zemmour the chance to become the spokesperson of the shattered Right.

Not even Marine Le Pen could play that role, because she’s considered too “populist” by the bourgeois, and on top of that, she invested too heavily in her de-demonization process to be accepted by the establishment.

As for Sarkozy, he was too ‘bling bling’ for the families of old France. Zemmour, with his ‘son of the periphery swagger’ and the classic cultural baggage of a very good student, was clever enough to identify the opening.

Zemmour may not be a Virgin Mary groupie. But when he published his book French Destiny, in 2018, he had to admit, in front of a fervent Catholic audience, that “he is convinced that one cannot be French without being deeply impregnated by Catholicism, its cult of images, the pomp, the order installed by the Church, this subtle mélange of Jewish morals, Greek reason and Roman law, but also the humility of servants.”

This is as close as one gets to the Zemmour creed.

What makes the Zemmour story eyebrow-raising across all the lands of Islam – from Northern Africa to West, Central and South Asia – is that he defines the “enemy not as political Islam, Islamism, jihadism or Islamic radicalism: the enemy is Islam” (my italics).

That’s exactly what he repeated this past Sunday during his first speech as a presidential candidate: a clash of civilizations redux.

His catalogue of propositions includes no Muslim first names to be adopted in France; “social measures of national solidarity” only for the French; the expulsion of all foreigners who have committed crimes (at least 15,000, as it stands); to close French borders if necessary; and to stop the migration inflow – as many as 400,000 a year, including legal asylum seekers. He explicitly wants students from Africa and the Maghreb to have no access to student grants.

Zemmour wants to limit legal immigration to a minimum. He maintains that Islam is a “civilization very far apart from ours.” He mercilessly blasts Macron, accused of wanting to “dissolve France into Europe and Africa.” Macron explains that a woman may also be a father, but Zemmour says: “I don’t agree. I want children to have a father and a mother.”

That’s where Zemmour’s Islamophobia morphs with his critique of ‘Islamo-Leftism’ and the woke-ism nebulae encompassing race theory, gender studies, post-colonialism, intersectionality, identity politics and cancel culture. That’s the privileged terrain where he could get further traction with the France of traditional values.

CNews have extolled Zemmour as The Dynamiter. Yet he runs the risk of dynamiting himself, self-cornered in an Islamophobia trap of his own making as he aims to re-found the French radical right and ‘reconquer’ the Republic.

Yet never underestimate the immensely ambitious, self-described Berber Jew who aims to ‘reconquer’ a Republic fighting an Islamophobic jihad.

0 thoughts on “The Reconquest: In 2022 elections, an Algerian Islamophobe wants to purge France from ‘the Muslim peril’”