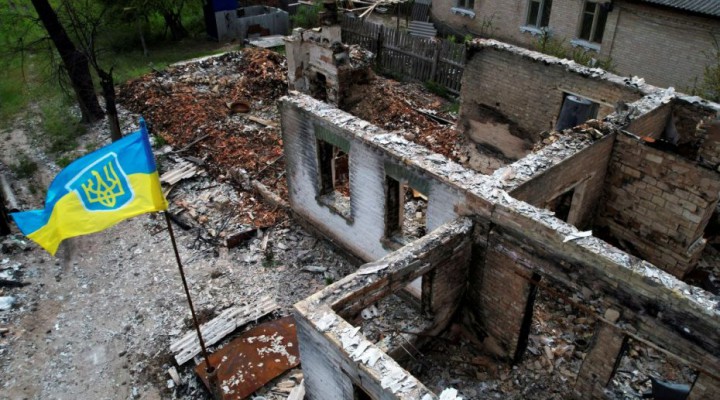 This is an existential war. A do or die affair, Pepe Escobar writes.

Wars are not won by psyops. Ask Nazi Germany. Still, it’s been a howler to watch NATOstan media on Kharkov, gloating in unison about “the hammer blow that knocks out Putin”, “the Russians are in trouble”, and assorted inanities.

Facts: Russian forces withdrew from the territory of Kharkov to the left bank of the Oskol river, where they are now entrenched. A Kharkov-Donetsk-Lugansk line seems to be stable. Krasny Liman is threatened, besieged by superior Ukrainian forces, but not lethally.

No one – not even Maria Zakharova, the contemporary female equivalent of Hermes, the messenger of the Gods – knows what the Russian General Staff (RGS) plans, in this case and all others. If they say they do, they are lying.

As it stands, what may be inferred with a reasonable degree of certainty is that a line – Svyatogorsk-Krasny Liman-Yampol-Belogorovka – can hold out long enough with their current garrisons until fresh Russian forces are able to swoop in and force the Ukrainians back beyond the Seversky Donets line.

All hell broke loose – virtually – on why Kharkov happened. The people’s republics and Russia never had enough men to defend a 1,000 km-long frontline. NATO’s entire intel capabilities noticed – and profited from it.

Arguably this may have been a one-off. The NATO-run Kiev forces simply can’t do a replay anywhere in Donbass, or in Kherson, or in Mariupol. These are all protected by strong, regular Russian Army units.

It’s practically a given that if the Ukrainians remain around Kharkov and Izyum they will be pulverized by massive Russian artillery. Military analyst Konstantin Sivkov maintains that, “most combat-ready formations of the Armed Forces of Ukraine are now being grounded (…) we managed to lure them into the open and are now systematically destroying them.”

The NATO-run Ukrainian forces, crammed with NATO mercenaries, had spent 6 months hoarding equipment and reserving trained assets exactly for this Kharkov moment – while dispatching disposables into a massive meat grinder. It will be very hard to sustain an assembly line of substantial prime assets to pull off something similar again.

The next days will show whether Kharkov and Izyum are connected to a much larger NATO push. The mood in NATO-controlled EU is approaching Desperation Row. There’s a strong possibility this counter-offensive signifies NATO entering the war for good, while displaying quite tenuous plausible deniability: their veil of – fake – secrecy cannot disguise the presence of “advisers” and mercenaries all across the spectrum.

That concept may be about to be tweaked. And that’s where the tortuous, tricky debate on Russia mobilization fits in. Yet even a partial mobilization may not be necessary: what’s needed are reserves to properly allow allied forces to cover rear/defensive lines. Hardcore fighters of the Kadyrov contingent kind would continue to play offense.

It’s undeniable that Russian troops lost a strategically important node in Izyum. Without it, the complete liberation of Donbass becomes significantly harder.

Yet for the collective West, whose carcass slouches inside a vast simulacra bubble, it’s the pysops that matters much more than a minor military advance: thus all that gloating on Ukraine being able to drive the Russians out of the whole of Kharkov in only four days – while they had 6 months to liberate Donbass, and didn’t.

So, across the West, the reigning perception – frantically fomented by psyops experts – is that the Russian military were hit by that “hammer blow” and will hardly recover.

Kharkov was preciously timed – as General Winter is around the corner; the Ukraine issue was already suffering from public opinion fatigue; and the propaganda machine needed a boost to turbo-lubricate the multi-billion dollar weaponizing rat line.

Yet Kharkov may have forced Moscow’s hand to increase the pain dial. That came via a few well-placed Mr. Kinzhals leaving the Black Sea and the Caspian to present their business cards to the largest thermal power plants in northeast and central Ukraine (most of the energy infrastructure is in the southeast).

Half of Ukraine suddenly lost power and water. Trains came to a halt. If Moscow decides to take out all major Ukraine substations at once, all it takes is a few missiles to totally smash the Ukrainian energy grid – adding a new meaning to “decommunization”: de-energization.

According to an expert analysis, “if transformers of 110-330 kV are damaged, then it will almost never be possible to put it into operation (…) And if this happens at least at 5 substations at the same time, then everything is kaput. Stone age forever.”

Russian government official Marat Bashirov was way more colorful: “Ukraine is being plunged into the 19th century. If there is no energy system, there will be no Ukrainian army. The matter of fact is that General Volt came to the war, followed by General Moroz (“frost”).

And that’s how we might be finally entering “real war” territory – as in Putin’s notorious quip that “we haven’t even started anything yet.”

A definitive response will come from the RSG in the next few days.

Once again, a fiery debate rages on what Russia will do next (the RGS, after all, is inscrutable, except for Yoda Patrushev).

The RGS may opt for a serious strategic strike of the decapitating kind elsewhere – as in changing the subject for the worse (for NATO).

It may opt for sending more troops to protect the front line (without partial mobilization).

And most of all it may enlarge the SMO mandate – going to total destruction of Ukrainian transport/energy infrastructure, from gas fields to thermal power plants, substations, and shutting down nuclear power plants.

Well, it could always be a mix of all of the above: a Russian version of Shock and Awe – generating an unprecedented socio-economic catastrophe. That has already been telegraphed by Moscow: we can revert you to the Stone Age at any time and in a matter of hours (italics mine). Your cities will greet General Winter with zero heating, freezing water, power outages and no connectivity.

All eyes are on whether “centers of decision” – as in Kiev – may soon get a Kinzhal visit. This would signify Moscow has had enough. The siloviki certainly did. But we’re not there – yet. Because for an eminently diplomatic Putin the real game revolves around those gas supplies to the EU, that puny plaything of American foreign policy.

Putin is certainly aware that the internal front is under some pressure. He refuses even partial mobilization. A perfect indicator of what may happen in winter is the referenda in liberated territories. The limit date is November 4 – the Day of National Unity, a commemoration introduced in 2004 to replace the celebration of the October revolution.

With the accession of these territories to Russia, any Ukrainian counter-offensive would qualify as an act of war against regions incorporated into the Russian Federation. Everyone knows what that means.

It may now be painfully obvious that when the collective West is waging war – hybrid and kinetic, with everything from massive intel to satellite data and hordes of mercenaries – against you, and you insist on conducting a hazily-defined Special Military Operation (SMO), you may be up for some nasty surprises.

So the SMO status may be about to change: it’s bound to become a counter-terrorist operation.

This is an existential war. A do or die affair. The American geopolitical /geoeconomic goal, to put it bluntly, is to destroy Russian unity, impose regime change and plunder all those immense natural resources. Ukrainians are nothing but cannon fodder: in a sort of twisted History remake, the modern equivalents of the pyramid of skulls Timur cemented into 120 towers when he razed Baghdad in 1401.

If may take a “hammer blow” for the RSG to wake up. Sooner rather than later, gloves – velvet and otherwise – will be off. Exit SMO. Enter War.

Is Putin’s Goody Two Shoes Behavior with his “Limited Operation” Blowing up in his face?

0 thoughts on “The Kharkov Game-Changer”