How a missile in Kabul connects to a Speaker in Taipei 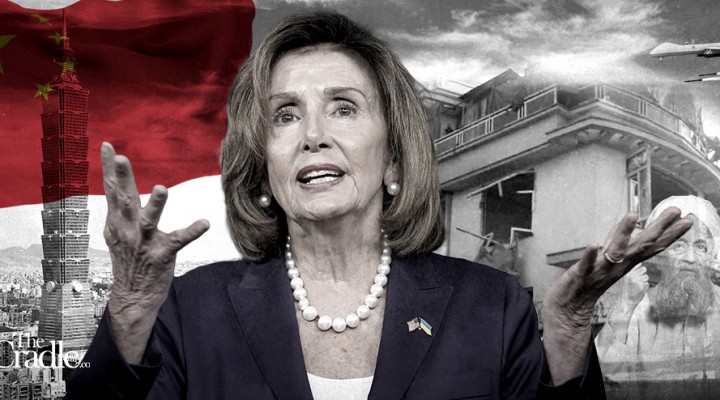 Washington’s hard power display of taking out Al-Qaeda’s Al-Zawahiri will not be reciprocated by Beijing over Pelosi’s provocative visit to Taiwan.

This is the way the “Global War on Terror” (GWOT) ends, over and over again: not with a bang, but a whimper.

Two Hellfire R9-X missiles launched from a MQ9 Reaper drone on the balcony of a house in Kabul. The target was Ayman Al-Zawahiri with a $25 million bounty on his head. The once invisible leader of ‘historic’ Al-Qaeda since 2011, is finally terminated.

All of us who spent years of our lives, especially throughout the 2000s, writing about and tracking Al-Zawahiri know how US ‘intel’ played every trick in the book – and outside the book – to find him. Well, he never exposed himself on the balcony of a house, much less in Kabul.

Why now? Simple. Not useful anymore – and way past his expiration date. His fate was sealed as a tawdry foreign policy ‘victory’ – the remixed Obama ‘Osama bin Laden moment’ that won’t even register across most of the Global South. After all, a perception reigns that George W. Bush’s GWOT has long metastasized into the “rules-based,” actually “economic sanctions-based” international order.

Cue to 48 hours later, when hundreds of thousands across the west were glued to the screen of flighradar24.com (until the website was hacked), tracking “SPAR19” – the US Air Force jet carrying House Speaker Nancy Pelosi – as it slowly crossed Kalimantan from east to west, the Celebes Sea, went northward parallel to the eastern Philippines, and then made a sharp swing westwards towards Taiwan, in a spectacular waste of jet fuel to evade the South China Sea.

Now compare it with hundreds of millions of Chinese who are not on Twitter but on Weibo, and a leadership in Beijing that is impervious to western-manufactured pre-war, post-modern hysteria.

The day after, as the narcissist Speaker, so proud of accomplishing her stunt, was awarded the Order of Auspicious Clouds for her promotion of bilateral US-Taiwan relations, the Chinese Foreign Minister issued a sobering comment: the reunification of Taiwan with the mainland is a historical inevitability.

That’s how you focus, strategically, in the long game.

What happens next had already been telegraphed, somewhat hidden in a Global Times report. Here are the two key points:

Point 1: “China will see it as a provocative action permitted by the Biden administration rather than a personal decision made by Pelosi.”

Xi is now reaching the exact same conclusion reached by Russian President Vladimir Putin earlier this year: the United States is “non-agreement capable,” and there’s no point in expecting it to respect diplomacy and/or rule of law in international relations.

Point 2 concerns the consequences, reflecting a consensus among top Chinese analysts that mirrors the consensus at the Politburo: “The Russia-Ukraine crisis has just let the world see the consequence of pushing a major power into a corner… China will steadily speed up its process of reunification and declare the end of US domination of the world order.”

The Sinophobic matrix predictably dismissed Xi’s reaction to the fact on the ground – and in the skies – in Taiwan, complete with rhetoric exposing the “provocation by American reactionaries” and the “uncivilized campaign of the imperialists.”

This may be seen as Xi playing Chairman Mao. He may have a point, but the rhetoric is pro forma. The crucial fact is that Xi was personally humiliated by Washington and so was the Communist Party of China (CPC), a major loss of face – something that in Chinese culture is unforgivable. And all that compounded with a US tactical victory.

So the response will be inevitable, and it will be classic Sun Tzu: calculated, precise, tough, long-term and strategic – not tactical. That takes time because Beijing is not ready yet in an array of mostly technological domains. Putin had to wait years for Russia to act decisively. China’s time will come.

For now, what’s clear is that as much as with Russia-US relations last February, the Rubicon has been crossed in the US-China sphere.

The price of collateral damage

The Central Bank of Afghanistan bagged a paltry $40 million in cash as ‘humanitarian aid’ soon after that missile on a balcony in Kabul.

So that was the price of the Al-Zawahiri operation, intermediated by the currently US-aligned Pakistani intelligence agency, the Inter-Services Intelligence (ISI). So cheap.

The MQ-9 Reaper drone carrying the two Hellfire R9X that killed Al-Zawahiri had to fly over Pakistani airspace – taking off from a US base in the Persian Gulf, traversing the Arabian Sea, and flying over Balochistan to enter Afghanistan from the south. The Americans may have also got human intelligence as a bonus.

A 2003 deal, according to which Islamabad facilitates air corridors for US military flights, may have expired with the American withdrawal debacle last August, but could always be revived.

No one should expect a deep dive investigation on what exactly the ISI – historically very close to the Taliban – gave to Washington on a silver platter.

Cue to an intriguing phone call last week between the all-powerful Chief of Staff of the Pakistani Army, Gen Qamar Javed Bajwa, and US deputy Secretary of State Wendy Sherman. Bajwa was lobbying for the International Monetary Fund (IMF) to release a crucial loan at the soonest, otherwise Pakistan will default on its foreign debt.

Were deposed former Prime Minister Imran Khan still in power, he would never have allowed that phone call.

The plot thickens, as Al-Zawahiri’s Kabul digs in a posh neighborhood is owned by a close advisor to Sirajuddin Haqqani, head of the “terrorist” (US-defined) Haqqani network and currently Taliban Interior Minister. The Haqqani network, needless to add, was always very cozy with the ISI.

And then, three months ago, we had the head of ISI, Lieutenant General Nadeem Anjum, meeting with Biden’s National Security Advisor  Jake Sullivan in Washington – allegedly to get their former, joint, covert, counter-terrorism machinery back on track.

Once again, the only question revolves around the terms of the “offer you can’t refuse” – and that may be connected to IMF relief. Under these circumstances, Al-Zawahiri was just paltry collateral damage.

Following Speaker Pelosi’s caper in Taiwan, collateral damage is bound to multiply like the blades of a R9-X missile.

The first stage is the People’s Liberation Army (PLA) already having engaged in live fire drills, with massive shelling in the direction of the Taiwan Strait out of Fujian province.

The first sanctions are on too, against two Taiwanese funds. Export of sable to Taiwan is forbidden; sable is an essential commodity for the electronics industry – so that will ratchet up the pain dial in high-tech sectors of the global economy.

Chinese CATL, the world’s largest fuel cell and lithium-ion battery maker, is indefinitely postponing the building of a massive $5 billion, 10,000-employee factory that would manufacture batteries for electric vehicles across North America, supplying Tesla and Ford among others.

So the Sun Tzu maneuvering ahead will essentially concentrate on a progressive economic blockade of Taiwan, the imposition of a partial no-fly zone, severe restrictions of maritime traffic, cyber warfare, and the Big Prize: inflicting pain on the US economy.

The War on Eurasia

For Beijing, playing the long game means the acceleration of the process involving an array of nations across Eurasia and beyond, trading in commodities and manufactured products in their own currencies. They will be progressively testing a new system that will see the advent of a BRICS+/SCO/Eurasia Economic Union (EAEU) basket of currencies, and in the near future, a new reserve currency.

The Speaker’s escapade was concomitant to the definitive burial of the “war on terror” cycle and its metastasis into the “war on Eurasia” era.

It may have unwittingly provided the last missing cog to turbo-charge the complex machinery of the Russia-China strategic partnership. That’s all there is to know about the ‘strategic’ capability of the US political ruling class. And this time no missile on a balcony will be able to erase the new era.

The downside of killing Ayman al-Zawahiri