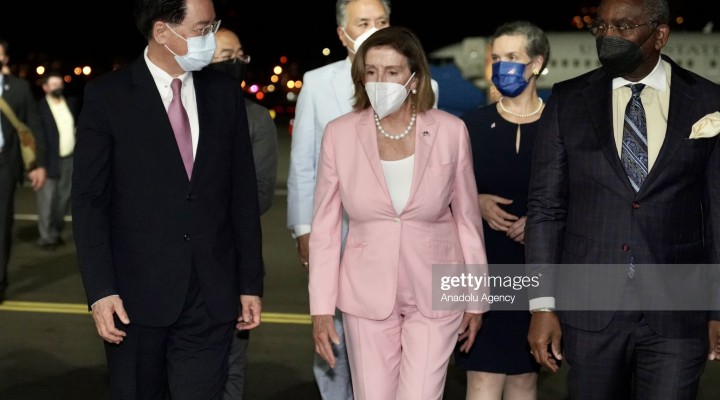 Altogether, domestic political, international political, and grand strategic calculations appear to have converged in the timing of Pelosi’s Taiwan trip.

US Speaker Pelosi is flirting with fire by taking a trip to Taiwan despite the island’s UN-recognized government in Beijing being adamantly against her visit. It remains to be seen what the immediate and long-term consequences of this provocation will be, but one can already figure out why she chose this particular time to do it. The first reason is connected to domestic politics, particularly incumbent President Biden’s unpopularity, including among his fellow Democrats.

A CNN poll recently revealed that a whopping 75% of his own party members don’t want him to run for re-election in 2024. It’s therefore possible that he might not only decline running, but that he might even be replaced prior to the election. In that second scenario, his resignation or passing would lead to Harris becoming President and Speaker Pelosi taking her place. In possible preparation of that, the third in line for the presidency might have provoked China to bolster her national security credentials.

The second strategic reason for the timing of her trip is connected to China’s domestic political process, specifically this fall’s 20th National Congress that’ll likely result in President Xi being re-elected for an unprecedented third term. Those members of the US’ permanent military, intelligence, and diplomatic bureaucracies (“deep state”) who are behind her trip could very likely be hoping that this provocation makes him look weak ahead of that historic event if Beijing doesn’t militarily intervene to stop it.

The final reason why Pelosi set out on her Taiwan trip at this time is that the US might be looking for a so-called “face-saving” reason to redirect its grand strategic focus away from Eastern Europe and towards East Asia in response to humiliating setbacks by its Ukrainian proxies over the past five months. Furthermore, the latest Gallup poll revealed that literally just 1% of Americans consider Russia as a “major problem” for their country, so the Ukrainian Conflict is also very unpopular at home.

Altogether, domestic political, international political, and grand strategic calculations appear to have converged in the timing of Pelosi’s Taiwan trip. The Speaker has career-related reasons first and foremost for provoking China in such a brazen way, after which come her “deep state” handlers’ desire to manipulate perceptions about President Xi. Finally, the last motivation is likely connected to the US flirting with a grand strategic reorientation away from Europe and back towards Asia once again.

That said, it’s unclear whether either of these objectives will succeed. Pelosi might not actually become Vice President, nor is there any realistic chance that President Xi will seriously be embarrassed on the world stage no matter what happens. It’s also up in the air whether the US will really redirect its focus away from Europe ahead of the coming winter and back towards Asia since a lot depends on the on-the-ground military dynamics of the Ukrainian Conflict as well as its diplomatic ones.

Nevertheless, there should be little doubt that this provocation was clearly timed in an attempt to achieve at least one of those strategic objectives: the domestic political, international political, and/or grand strategic one. It’s also indeed possible that all three fail and that this whole thing just results in the unprecedented deterioration of Chinese-American relations and the consequent destabilization of Asia. In any case, the world will find out soon enough, even if it takes a few months to know for sure.