HOME / WORLD / China: Xi Gets Ready for the Final Countdown 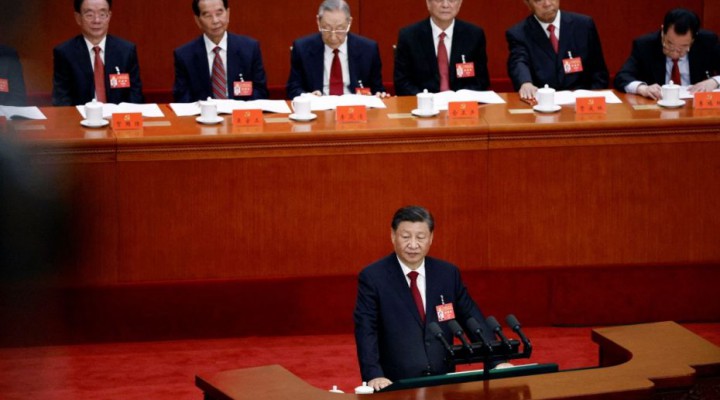 What drives China and Russia is that sooner rather than later they will be ruling the Heartland.

President Xi Jinping’s 1h45min speech at the opening of the 20th Congress of the Communist Party of China (CPC) at the Great Hall of the People in Beijing was an absorbing exercise of recent past informing near future. All of Asia and all of the Global South should carefully examine it.

The Great Hall was lavishly adorned with bright red banners. A giant slogan hanging in the back of the hall read, “Long Live our great, glorious and correct party”.

Another one, below, functioned like a summary of the whole report:

True to tradition, the report outlined the CPC’s achievements over the past 5 years and China’s strategy for the next 5 – and beyond. Xi foresees “fierce storms” ahead, domestic and foreign. The report was equally significant for what was not spelled out, or left subtly implied.

Every member of the CPC’s Central Committee had already been briefed about the report – and approved it. They will spend this week in Beijing studying the fine print and will vote to adopt it on Saturday. Then a new CPC Central Committee will be announced, and a new Politburo Standing Committee – the 7 that really rule – will be formally endorsed.

This new leadership line-up will clarify the new generation faces that will be working very close to Xi, as well as who will succeed Li Keqiang as the new Prime Minister: he has finished his two terms and, according to the constitution, must step down.

There are also 2,296 delegates present at the Great Hall representing the CPC’s over 96 million members. They are not mere spectators: at the plenary session that ended last week, they analyzed in-depth every major issue, and prepared for the National Congress. They do vote on party resolutions – even as those resolutions are decided by the top leadership, and behind closed doors.

Xi contends that in these past 5 years the CPC strategically advanced China while “correctly” (Party terminology) responding to all foreign challenges. Particularly key achievements include poverty alleviation, the normalization of Hong Kong, and progress in diplomacy and national defense.

It’s quite telling that Foreign Minister Wang Yi, who was sitting in the second row, behind the current Standing Committee members, never took his eyes off Xi, while others were reading a copy of the report on their desk.

Compared to the achievements, success of the Xi-ordered Zero-Covid policy remains highly debatable. Xi stressed that it has protected people’s lives. What he could not possibly say is that the premise of his policy is to treat Covid and its variants as a U.S. bioweapon directed against China. That is, a serious matter of national security that trumps any other consideration, even the Chinese economy.

Zero-Covid hit production and the job market extremely hard, and virtually isolated China from the outside world. Just a glaring example: Shanghai’s district governments are still planning for zero-Covid on a timescale of two years. Zero-Covid will not go away anytime soon.

A serious consequence is that the Chinese economy will most certainly grow this year by less than 3% – well below the official target of “around 5,5%”.

Now let’s look at some of the Xi report’s highlights.

Taiwan: Beijing has started “a great struggle against separatism and foreign interference” on Taiwan.

Hong Kong: It is now “administered by patriots, making it a better place.” In Hong Kong there was “a major transition from chaos to order.” Correct: the 2019 color revolution nearly destroyed a major global trade/finance center.

Opening up: China has become “a major trading partner and a major destination for foreign investment.” That’s Xi refuting the notion that China has grown more autarchic. China will not engage in any kind of “expansionism” while opening up to the outside world. The basic state policy remains: economic globalization. But – he didn’t say it – “with Chinese characteristics”.

“Self-revolution”: Xi introduced a new concept. “Self-revolution” will allow China to escape a historical cycle leading to a downturn. And “this ensures the party will never change.” So it’s the CPC or bust.

Marxism: definitely remains as one of the fundamental guiding principles. Xi stressed, “We owe the success of our party and socialism with Chinese characteristics to Marxism and how China has managed to adapt it.”

Risks: that was the speech’s recurrent theme. Risks will keep interfering with those crucial “two centenary goals”. Number one goal was reached last year, at the CPC’s 100th anniversary, when China reached the status of a “moderately prosperous society” in all respects (xiaokang, in Chinese). Number two goal should be reached at the centenary of the People’s Republic of China in 2049: to “build a modern socialist country that is prosperous, strong, democratic, culturally advanced and harmonious.”

Development: the focus will be on “high-quality development”, including resilience of supply chains and the “dual circulation” economic strategy: expansion of domestic demand in parallel to foreign investment (mostly centered on BRI projects). That will be China’s top priority. So in theory any reforms will privilege a combination of “socialist market economy” and high-level opening, mixing the creation of more domestic demand with supply-side structural reform. Translation: “Dual-circulation” on steroids.

“Whole-process democracy”: that was the other new concept introduced by Xi. Translates as “democracy that works”, as in rejuvenating the Chinese nation under – what else – the CPC’s absolute leadership: “We need to ensure that people can exercise their powers through the People’s Congress system.”

Socialist culture: Xi said it’s absolutely essential “to influence young people”. The CPC must exercise ideological control and make sure the media fosters a generation of young people “who are influenced by traditional culture, patriotism and socialism”, thus benefitting “social stability”. The “China story” must go everywhere, presenting a China that is “credible and respectable”. That certainly applies to Chinese diplomacy, even the “Wolf Warriors”.

“Sinicise religion”: Beijing will continue its drive to “Sinicise religion”, as in “proactively” adapting “religion and the socialist society”. This campaign was introduced in 2015, meaning for instance that Islam and Christianity must be under CPC control and in line with Chinese culture.

Now we reach the themes that completely obsess the decaying Hegemon: the connection between China’s national interests and how they affect the civilization-state’s role in international relations.

The military: the PLA’s equipment, technology and strategic capability will be strengthened. It goes without saying that means total CPC control over the military.

“One country, two systems”: It has proven to be “the best institutional mechanism for Hong Kong and Macau and must be adhered to in the long term”. Both “enjoy high autonomy” and are “administered by patriots.” Xi promised to better integrate both into national strategies.

Taiwan reunification: Xi made a pledge to complete the reunification of China. Translation: return Taiwan to the motherland. That was met with a torrent of applause, leading to the key message, addressed simultaneously to the Chinese nation and “foreign interference” forces: “We will not renounce the use of force and will take all necessary measures to stop all separatist movements.” The bottom line: “The resolution of the Taiwan issue is a matter for the Chinese people themselves, to be decided by the Chinese people.”

It’s also quite telling that Xi did not even mention Xinjiang by name: only by implication, when he stressed that China must strengthen the unity of all ethnic groups. Xinjiang for Xi and the leadership mean industrialization of the Far West and a crucial node in BRI: not the object of an imperial demonization campaign. They know that the CIA destabilization tactics used in Tibet for decades did not work in Xinjiang.

Shelter from the storm

Now let’s unpack some of the variables affecting the very tough years ahead for the CPC.

When Xi mentioned “fierce storms ahead”, that’s what he thinks about 24/7: Xi is convinced the USSR collapsed because the Hegemon did everything to undermine it. He won’t allow a similar process to derail China.

In the short term, the “storm” may refer to the latest round of the no holds barred American war on Chinese technology – not to mention free trade: cutting China off from buying or manufacturing chips and components for supercomputers.

It’s fair to consider Beijing keeps the focus long-term, betting that most of the world, especially the Global South, will move away from the U.S. high tech supply chain and prefer the Chinese market. As the Chinese increasingly become self sufficient, U.S. tech firms will end up losing world markets, economies of scale, and competitiveness.

Xi also did not mention the U.S. by name. Everyone in the leadership – especially the new Politburo – is aware of how Washington wants to

Xi did not enter into details during his speech, but it’s clear the driving force going forward will be technological innovation linked to a global vision. That’s where BRI comes in, again – as the privileged field of application for these tech breakthroughs.

Only this way we can understand how Zhu Guangyao, a former vice minister of finance, may be sure that per capita GDP in China in 2035 would at least double the numbers in 2019 and reach $20,000.

The challenge for Xi and the new Politburo right away is to fix China’s structural economic imbalance. And pumping up debt-financed “investment” all over again won’t work.

So bets can be made that Xi’s third term – to be confirmed later this week – will have to concentrate on rigorous planning and monitoring of implementation, much more than during his previous bold, ambitious, abrasive but sometimes disconnected years. The Politburo will have to pay way more attention to technical considerations. Xi will have to delegate more serious policymaking autonomy to a bunch of competent technocrats.

Otherwise, we will be back to that startling observation by then Premier Wen Jiabao in 2007: China’s economy is “unstable, unbalanced, uncoordinated and ultimately unsustainable”. That’s exactly where the Hegemon wants it to be.

As it stands, things are far from gloomy. The National Development and Reform Commission states that compared to the rest of the world, China’s consumer inflation is only “marginal”; the job market is steady; and international payments are stable.

The China-Russia strategic partnership has no time to lose with global hegemonic games; what drives them is that sooner rather than later they will be ruling the Heartland – the world island – and beyond, with allies from the Rimland, and from Africa to Latin America, all participating in a new form of globalization. Certainly with Chinese characteristics; but most of all, pan-Eurasian characteristics. The final countdown is already on.

China, Taiwan and the Sanctions Trap

From Suicide to Dead and Buried… Germany Now Provokes China

0 thoughts on “China: Xi Gets Ready for the Final Countdown”