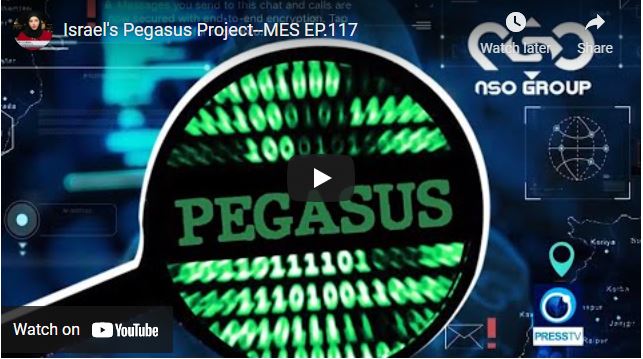 The accusations that spy software known as Pegasus may have been used to carry out surveillance on journalists, activists and even kings, presidents and political leaders highlights that surveillance is now for sale. Guess who’s selling: Israel. The ability to remotely access phones was once considered something only a few states could do. But high-end espionage and surveillance powers when in the hands of a rogue entity like Israel can easily turn into a commercialized weapon that breaches personal privacy in a fraudulent access to personal electronic devices which would definitely lead to criminal association.

To discuss this issue with us from Beirut is Dr. Hasan Younes author and expert in International Business Management.

The abuse of Pegasus software has been known for several years, though these latest revelations appear to have gained such traction in the mainstream owing to the high number of civilians who have reportedly been surveilled through its use. The continuation of the now-years-long scandal surrounding the abuse of Pegasus has also brought considerable controversy and notoriety to the Israeli company that developed it, the NSO Group. While the NSO Group has become infamous, other Israeli companies with even deeper ties to Israel’s intelligence apparatus have been selling software that not only provides the exact same services to governments and intelligence agencies but purports to go even farther. Meet Toka:  the Most Dangerous Israeli Spyware Firm You’ve Never Heard Of in this following report.

To discuss this issue with us from Los Angeles is Fiorella Isabel journalist from the convo couch.