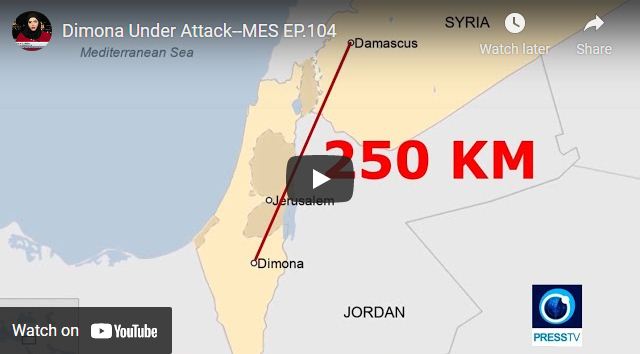 Air raid sirens went off in Dimona town in the Palestinian occupied Naqab Desert in the early hours of Thursday April 22, which is home to Israel’s infamous nuclear reactor, indicating a possible incoming attack. A missile landed only a few kilometers away from Dimona plant which Israel immediately deemed as a missile that has lost its track from the Syrian side. Supposedly it was a surface to air missile that was targeting an Israeli jet raiding Damascus and ended up somehow falling 250 km away from its initial target.

To discuss this issue with us from Beirut is Mohamad Obeid political commentator.

Meanwhile, Iran’s Islamic Revolution Guard has released precise drone footage of a US Navy aircraft carrier in the Persian Gulf, aired right here on Press TV on Wednesday. The video, which shows the aircraft carrier with warplanes, helicopters and other military equipment, was reportedly recorded by a four-strong drone squadron providing real-time and precise details of the US warship. The video comes as the US is still refusing to remove all sanctions off of the Iranian population as renewed diplomacy are underway to revive the abandoned 2015 nuclear deal.

To discuss this issue with us from Tehran is Dr. Hamed Mousavi, political science professor at Tehran University.