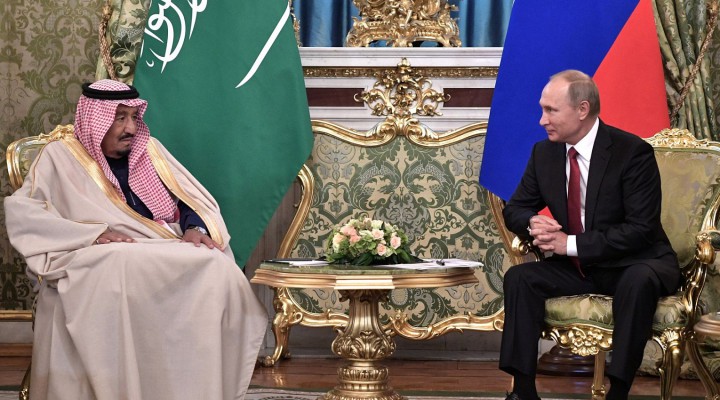 Russia’s proposal implies that some United States policies in the region, such as its exclusive leadership in counter-terrorism efforts, lack of adherence to international law, excessive use of force, double standards, and blind support regarding Israel, should be reviewed.

Russian President Vladimir Putin will visit Saudi Arabia in a few days. The journey is the latest step in the careful policy that Russia has been pursuing towards the Gulf Cooperation Council’s members to present itself as a pragmatic, reliable, and maybe, alternative partner.

The two countries already cooperate effectively and pragmatically. They are the world’s second and third-largest oil producers, and effectively control oil price and production quotas through the so-called OPEC-plus mechanism.

During his visit, Putin will attempt to further broaden this cooperation, taking the current political context into account. The recent attack on Saudi oil facilities has raised significant concerns: regarding Saudi Arabia’s ability to defend its strategic infrastructure, regarding the reliability of American security guarantees to the Kingdom, and the effectiveness of the costly weapons it has purchased for decades from the United States. If at the end of the visit, Saudi rulers are ready to consider expnding their military procurment, it would already be a success for Russia. All President Putin has to do is to convey three precise messages: Russian weapons systems are indisputably cheaper than American ones, they could be even more effective and easy to use, and, of course, they do not carry with them the conditions that the United States often attaches to its military supplies.

However, it would be an oversight to see the Russian President’s visit to Riyadh as merely a simple trade mission.

From a political standpoint, Putin presents, through Russia’s role in Syria, a nation that offers reliability and consistency. His visit comes amid a dramatic juncture, wherefears of a general conflict in the Middle East are increasing, together with growing signs that the United States is unpredictabile and unreliable, as demonstrated by Washington’s controversial green light, given to Ankara’s military operation in north-eastern Syria at the expense of its Kurdish allies.

The marketing of these two qualities is also packakged with the specific proposal of a stabilisation mechanism for the Persian Gulf.

The proposal has some interesting suggestions, such as “a single counter-terrorism coalition” and the mobilisation of “public opinion across Islamic and other countries with a view to jointly counter the threat of terrorism, including through integrated efforts in the media space.”

It also reaffirms some benchmarks that in the last decades have become ignored, twisted or too selectively applied, such as “All parties should adhere to international law, to the UN Charter and UN Security Council resolutions first” and “Peace-making operations can only be conducted on the basis of relevant UN Security Council resolutions or at the request of the legitimate authorities of the attacked state. Double standards are unacceptable…”

As for the delicate issue of strengthening the non-proliferation regime, Moscow’s proposal reiterates the ambition to make Middle East “…a zone free of weapons of mass destruction”. An objective that, sooner or later, will expose the real big elephant in the room of the counter-proliferation efforts in the region: not the Iranian nuclear programme, but Israel’s nuclear arsenal. To remain in the same context, Russia also insists that effective regional stabilisation must include “Efforts to resolve chronic conflicts, first of all the Israeli-Palestinian conflict, which remains one of the major destabilising factors throughout the Middle East, enabling extremists to recruit new fighters, should be pursued.” Unfortunately, no Israeli Government – irrespective of the political majority that will be determined by the now-too-frequent political elections in the country – appears ready to garner seriously support.

Russia’s proposal implies that some United States policies in the region, such as its exclusive leadership in counter-terrorism efforts, lack of adherence to international law, excessive use of force, double standards, and blind support regarding Israel, should be reviewed.

Together with a revised military procurement, Saudi rulers’ reaction to the Russian proposal will help gauge if, and to which extent, they are ready to reconsider their historical alignment with the United States. Maybe Russia could also have better cards in bridging the Saudi-Iranian divide.

Washington is opening a void in the region; Moscow can be clever in how it chooses to close it.