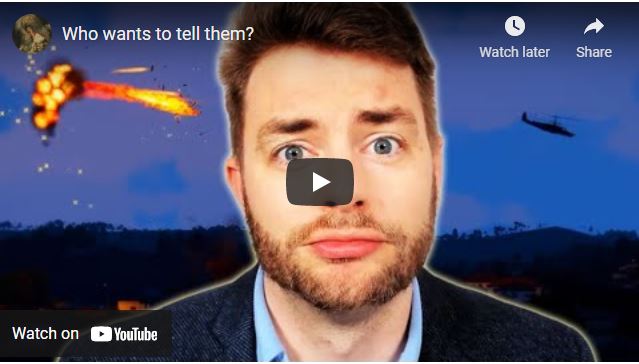 The truth?  90 percent of the combat footage out of Ukraine that “messages” pro-NATO/NAZI is from video games…recorded, cut, and degraded to low resolution…and this is proven time and time again but never reported.

Truth?  1300 Russian dead, 7000 Ukrainian dead, and Russia is winning the war of course while the US is planning a probably bio-chemical attack on Kiev.

Russia has said they will retaliate using nuclear weapons if the US attempts what it did in Syria over and over.This is a fact…confirmed…not internet news…

and to back up the story, the liars at NATO have left the evidence on Twitter:

🚁 Valeriy Zaluzhny, the Commander in Chief of the Ukrainian Armed Forces, has announced that this morning in the direction of Kherson, Ukrainian forces skillfuly shot down four Russian K-52 ZS helicopters during an aerial defense mission.#war #stoprussia #StandWithUkraine pic.twitter.com/ppvCiycv1M

💪In the Kherson direction this morning, the air defense forces of of Ukraine eliminated 4 K-52 helicopters of the Armed Forces of the Russian Federation. pic.twitter.com/3dMG50l510

…and this one was done in “portrait mode” rather than “landscape:

More Evidence That The US Is Trying To Prolong This War

Will Putin Wake Up to the Threat of Russia’s Atlanticist Integrationists?

In Case You Care to Know What Is Really Going On