HOME / SOCIAL/CULTURAL / The Pandemic of Lies

The Pandemic of Lies 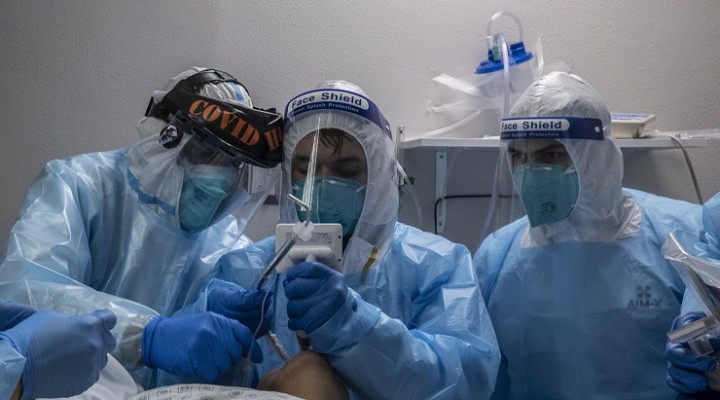 The US and Europe are now entering a fourth or is it the fifth COVID cycle, new infections, new peaks in deaths and a feeling of hopelessness that is darkening the Judeo-Christian holiday season.

It is driven by what some generously call “vaccine resistance.” Without the anti-vaccine movement, COVID would have ended in much of the world where vaccines are plentiful and safe.

Are the vaccines safe? That answer is a clear yes, side effects, based on the hundreds of millions inoculated, are rare and the current rate of serious infection and death between unvaccinated and vaccinated runs about 20 to one. Unvaccinated are “dying like flies” in both Europe and the US but their deaths, running around 5000 a month for month after month, are only a symptom of a greater disease.

What is that disease?

We know COVID, okay, we don’t know where it came from and we certainly have never seen a version of influenza that causes blood clots and destroys lungs, sometimes in hours.

What we, meaning “the collective public” have been exposed to, along with the disease, is what is also called, in business circles, “mushroom management.”

This is where one is kept in the dark and fed a steady diet of horse manure.

The excuse there is one common to both government and a medical industry that have one thing in common, they treat their patients, albeit “constituents” as ignorant and willful children. The regimen they prescribe is a diet of outright lies, crafted half-truths and watered-down predictions. You see, we are too childlike to ever be told the truth.

What is that truth? Without belaboring the reader with what is only an aside, COVID one of many diseases created by laboratories primarily funded by USAID/CIA money, labs run by scientists who used to work for germ warfare programs but who now “protect us” through developing new diseases.

Those of the intelligence community know these diseases are sometimes accidentally unleashed but that they are also regularly tested on unsuspecting populations, New York commuters, Angolan and Namibian separatists or, more recently, farm animals and later people of Eurasia, primarily Russia, China and the Caucuses.

Then we have COVID. It bounced around the planet in late 2019 and early 2020 in a totally inexplicable manner, entering Italy, Spain, the US certainly but how did it get to China?

What we can do is follow research publications, which are now being censored and at times erased. We find SARS/COV research centered in the US, at the University of North Carolina for instance, where “chimera” versions of a disease that looks exactly like COVID was developed in 2017 and escaped the lab five times.

We also follow USAID funding for graduate students to collect bats from around the Republic of Georgia for US Defense Department funded studies of SARS/COV as well.

The lab in Tbilisi has been tied to both swine and avian influenza outbreaks and those who manage and use that facility have also been tied to chemical weapons issues as well, particularly in Syria.

These aren’t necessarily “truths” as such. They are only indicators, part of a mosaic that would and should drive honest investigative journalists.

However, what would happen if this investigation, as to the origins of COVID-19, were to move forward, following the suspicious of US Senator Rand Paul who has speculated during Congressional inquiries in the US, that COVID-19 is a biological weapon.

Now for a dark note, one written only reluctantly. COVID most certainly was developed as a biological weapon. Moreover, taking into account the vast profiteering and inexplicable “mismanagement” by the Trump regime in the US, it could be reasonably assumed that COVID-19 was developed by the US government and released by a cabal within the White House and Pentagon.

This is our watershed.

The general public knows nothing about this cabal as such, other than fake reports from Qanon, for instance. On examination, not only is Qanon always wrong, when one follows the purpose of Qanon, one is led to that cabal itself. We find the same thing when we examine Wikileaks as was done by former White House National Security Advisor Zbigniew Brzezinski, architect of the Camp David Accords of 1976.

Back in 2009, Brzezinski appeared on National Public Radio with Judy Woodruff. There, he opined that Wikileaks was run by an intelligence agency with the purpose of planning fake “leaks” into a “sea of chickenfeed” in order to promote an agenda promoting the exact opposite of Wikileaks stated purpose, further US military support of Israel and a US policy promoting war on Iran, among other things.

This opens another door, that of “the leakers.”

It’s curious that nothing is leaked about COVID-19 when dozens of key documents outlining intelligence agency funding of the development of COVID type diseases can still, for the time being, be found easily.

Ah, but this drives us away from COVID-19 and on to that other “pandemic” from 20 years ago, the outbreak of war across the Middle East tied to the events of 9/11.

Let us look, for a moment, at some commonality here.

The 2000 election was not only rigged, but it was also done so openly. The real final count in Florida, where the US Supreme Court stopped the vote count based on an imaginary threat of civil disorder led by Roger Stone (the Brooks Brothers Riot), had Bush (43) losing by 20,000 votes.

Audits in Ohio showed voting in some precincts at over 100 percent, something we saw in Wisconsin in 2016 with Trump.

This is an area where divergence between reported “truth” and “real truth” is frightening. For those who follow “real world” issues, not only did the 2000 election appear overtly rigged, the 2004 election seemed worse.

During one election lawsuit, it was learned that Bush operatives had hired a computer consultant to work with a voting machine company to hack machines using flash drives. Voting machines are not hooked to the internet.

This was done using “election watchers” who were recruited by an extremist “think tank” funded by a mysterious group of billionaires who control Hollywood, the news media, big oil, big pharma and defense industries, not just in the US but around the world.

This is the same group that made trillions, not billions, off the Global War on Terror, weapons, stolen oil, debt speculation and even more off COVID-19.

Moreover, “they” are getting a “double” and even “triple” dip on their payback through a carefully engineered anti-vaccine conspiracy that is closely tied to extremists and even terrorists, in the US but also across Europe as well.

Those seeking to overthrow the US constitution and impose a “one religion” rule as set out by General Michael Flynn, who may well be the real “Q” clearance behind Qanon, are also building on the COVID disaster and anti-vaccine craze, combined with anti-immigrant sentiments, to recrate a Nazi run Europe.

In fact, this same anti-immigrant movement is being used to unite extremists around the world. One must also note that the immigration itself is driven, not just by debt based failed economies but today, and for the past 20 years, by militarism and false flag terrorism wrapped in “color revolution” and “regime change” rhetoric.

Yet no one goes here, certainly not the press, not Hollywood, not our collective political leadership. Those that approach this “trail” as it were, are branded as anti-Semites or conspiracy theorists.

The insult there, obvious to everyone, is the history of controlled media working hand in hand with the cabals that started World War I and II and nearly every conflict before and since, to before the birth of Christ.

We land here inexorably, that “truth” as such is a rare commodity and can exist but not within the context of endless fake narratives.

One truth is self-evident above all others, that the media will not save us. It certainly won’t and can’t deliver “truth,” particularly with most investigative journalism being hand delivered by intelligence agencies to their assets draped in their Pulitzer Prizes.

Behind it all, the social media giants but are they really giants? Let’s not leave out Wikipedia, the fake online “encyclopedia” that tells us who designed our motorcycles with uncanny aplomb while spreading “certified” hoaxes, smears and conspiracy theories that flood from CIA/USAID funded data black sites in Haifa and Tel Aviv.

Without the chaos theory designed algorithms from Google, Facebook and others, carefully profiled “mentally vulnerable” could not be fed a continual diet of mind control.

Not only has this created an army of armed ignorance but one that self-funds.

Reality is Creeping In On Fauci and Walensky

The Covid “Vaccine” Has Caused a Pandemic

0 thoughts on “The Pandemic of Lies”