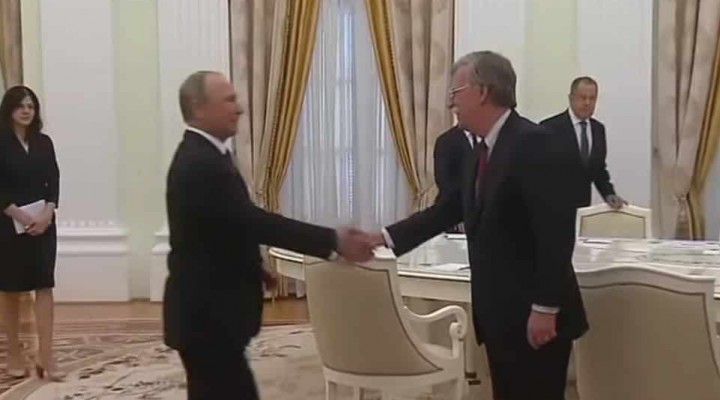 Russian President Vladimir Putin was humiliated today as Britain seized oil supplies heading to Syria.  Britain, in doing so, declared a blockade of Syria and asserted, as a US proxy, total control of the Mediterranean, a sea where Russia has a naval base and maintains a flotilla of nuclear armed ships.

The chance of a Putin/Trump summit, with Trump’s authority virtually “nil” is quickly eroding as is Putin’s standing in the world as the Neocon’s openly try to do to Syria what they did to the Iraqi people under Bush 43, with over 2 million dead.

But it was Britain they used, now ruled by Boris Johnson, the “almost prime minister,” half clown, half dime store “Netanyahu” clone.

Simply put, Boris Johnson and “the trousers queen” Theresa May, stepped into the middle of a Washington power struggle between the Neocons and their Israeli masters and the new relationship forged between Donald Trump and Vladimir Putin at the recent G20 conference in Osaka.

Syrians nearly froze this winter and are suffering power outages, food shortages and a paralyzed economy.  Britain’s action, in violation of the JCPOA, constitutes not sanctions but a blockade with this exception.

Britain would have to stop all ships heading to Syria and Britain is very unlikely to stop Russian ships, that might go badly at best. A “partial blockade” is not a blockade at all but legally constitutes piracy.

Bolton’s call went to Boris Johnson, and was done in concert with Israeli leader Netanyahu but not President Trump.  From Sputnik News.

“Earlier, British Royal Marines and officials from the British colony of Gibraltar detained a vessel suspected of transporting oil to Syria in violation of EU sanctions.

The Iranian Foreign Ministry has summoned UK Ambassador to Iran Nicolas Hopton over what it described as the “illegal seizure” of an oil tanker carrying Iranian oil to Syria, Iranian state television has reported, citing Foreign Ministry spokesperson Abbas Mousavi.

Earlier, Spanish officials said that the Grace 1, a Panamanian-flagged supertanker carrying Iranian crude oil to Syria and seized by British patrol ships off Gibraltar, was detained at Washington’s behest.

Prime Minister Theresa May later praised the seizure, with a Number 10 spokesperson saying Gibraltar had sent a ‘clear message’ that the UK would not tolerate any violation of the sanctions.”