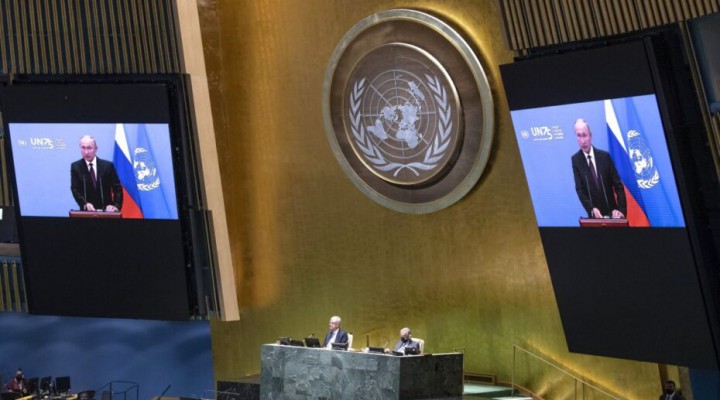 How fitting on the 75th anniversary of establishing the United Nations after the defeat of fascism and the birth of multilateralism, we should revisit that fateful watershed through the contemporary words of current world leaders. Either we go forward cooperatively and peacefully, or we descend into barbarism – again.

Donald Trump, Xi Jinping and Vladimir Putin were among world leaders who addressed the United Nations’ general assembly this week marking the 75th anniversary of the organization’s founding. On display were two visions: one regressive and reactionary delivered by Trump; the other promoting a world based on peaceful partnership.

All of the speeches were presented via teleconference due to the coronavirus pandemic preventing a full assembly in New York. But of the three leaders, it was Trump who sounded remote and estranged. His address was tone deaf to the occasion. Seventy-five years after the end of World War II – the most horrific conflagration in history – and the defeat of fascism, Trump sounded historically illiterate, boorish and, to use a vulgar expression, completely up his own ass. The United Nations was founded out of the ashes of that war with a death toll of at least 70 million – nearly half of which was suffered by the Soviet Union. The new world body was based on the premise of never allowing a repeat of the horror through common acceptance of the principles of respect for the sovereignty of nations, common humanity and rejection of aggression. The UN Charter no less.

What Trump delivered was an abomination of UN principles. His rant was bristling with aggression towards China based on spurious allegations about the coronavirus pandemic, blaming Beijing for “unleashing a plague” on the rest of the world. Ominously, as in previous statements over recent months, Trump demanded that China be held accountable for the disease. Apart from antagonizing China, the American president also exulted in presumed U.S. military power.  After decades of waging illegal wars across the Middle East and elsewhere – costing millions of lives – Trump incongruously claimed  Washington was bringing peace to the region through a series of belated dubious “deals” between Arab monarchial regimes and Israel.

In short, it was the usual hubris of American exceptionalism, other wise known as nationalistic supremacy, and the militaristic doctrine of “might is right”. We’ve heard all this self-righteous, delusional bombast before from U.S. leaders. The only thing perhaps in Trump’s favor was the brevity and unvarnished way he put it rather than all the florid rhetorical camouflage of, say, an Obama, which paints U.S. imperialism as some kind of benign force for humanity. Trump spares us the bother of unpacking the lies and pretensions of virtue that most American leaders indulge in. What we get with Trump is the essential raw American power of jingoism and aggression.

By total contrast, both China’s President Xi and Russia’s President Putin, who both spoke after Trump, delivered speeches that were fitting the occasion. Significantly, both reminded the world that the UN was founded out of the historic “anti-fascist war”. They reiterated the principles of peaceful partnership, non-aggression, respect for sovereignty and the need for the world to work cooperatively in a spirit of mutual multilateralism.

There was no ranting nor recrimination, no bragging about military prowess, nor profane “prayers to God” about not having to use “our advanced weapons” as Trump had done in what can only be understood as a menacing threat to the rest of the world to accept American “peace” down the barrel of a gun.

On the urgent matter of the coronavirus pandemic, both Xi and Putin appealed for global cooperation to defeat a common enemy of humanity. The Russian leader offered to make available the recently innovated Sputnik V vaccine to the rest of the world “free of commercial charge”. The UN chief Antonio Guterres acknowledged thanks to Putin for the Russian offer, the world’s first vaccine developed against coronavirus.

Back to Trump, it was a diatribe charged with belligerence and the usual American presumption of unilateralism. There was no humanity in Trump’s words, just nasty narcissism and presumed American right for retribution against others whom it deems adversaries. (When have American leaders ever not deemed others as adversaries?)

Safe to say, too, the founders of the UN would have recognized Trump’s speech and would have recoiled in horror at such a demagogic tirade. For the kind of toxic, hyper-nationalistic, militaristic, bellicose politics espoused by Trump are of the same despicable category which the world thought it had defeated when establishing the United Nations. Fascism.