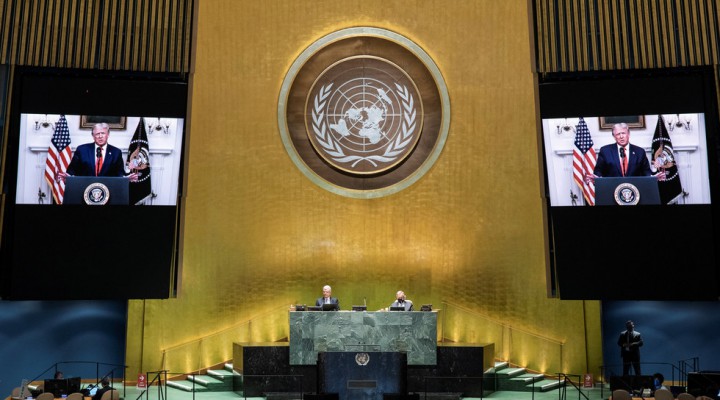 Trump’s UN speech bristled with perceived grievances and China bashing. He also boasted of the US “fulfilling our destiny of peacemaker” with the world’s greatest military. Peace, that is, down the barrel of an American gun.

The American president’s speech was angry, curt and severe, delivered with a stabbing staccato voice. In just seven minutes he lurched from pillorying China and holding it responsible for “unleashing” a pandemic on the world, to preening about supposed peace deals in the Middle East brokered by his administration. And in between, Trump exulted in how the US has the most advanced weaponry in the world, which he “prays to God… we never have to use.” That sounded like a threat.

Trump’s rant was the usual narcissistic “American exceptionalism” the world has come to expect and disdain from US leaders. But on this occasion it was more brazenly nationalistic and jingoistic. It was an unprecedented expression of bare-faced aggression towards China based on spurious allegations that the Trump administration has been spewing over the coronavirus pandemic. Trump in his UN address again provocatively referred to the “China virus” and accused Beijing of deliberately infecting the world.

“In the earliest days of the virus, China locked down travel domestically while allowing flights to leave… and infect the world… the United Nations must hold China accountable for their actions,” said Trump.

His tetchy demand for the UN to hold the Chinese government accountable for allegedly spreading “a plague,” which has killed almost one million people worldwide since the beginning of this year, amounts to an American ultimatum for confrontation with Beijing. A confrontation based on false claims about the origins of the disease and an anti-China conspiracy of alleged cover-up in cahoots with the World Health Organization which Trump and his aides have wildly promoted.

The Trump administration’s unhinged diatribes against China in recent months are obvious distractions from its own gross mishandling of a pandemic, where the US death toll from the disease is nearly 20 percent of the world total despite having only four percent of the globe’s population. The scapegoating of China also serves as a proxy for underlying US grievances over economic rivalry and declining power against a rising China. Trump’s anti-China fixation has recklessly driven the world into a new Cold War where tensions and international relations have become twisted and polarized in zero-sum mentality. And that mentality is all from the American side.

Only minutes before Trump’s address, UN chief Antonio Guterres opened the 75th general assembly of the world body by appealing for cooperation between the United States and China to avoid a new Cold War. “We are moving in a very dangerous direction,” he said. “Our world cannot afford a future where the two largest economies split the globe in a great fracture.” He said the world was facing a “1945 moment.”

Those who built the @UN 75 years ago had lived through a pandemic, a global depression, genocide & world war.

They knew the cost of discord & the value of unity.

The #COVID19 pandemic is a crisis unlike any we have ever seen.

Subsequent speeches by various world leaders were pre-recorded due to the UN session being held remotely to avoid coronavirus public health risks. Nevertheless, it is doubtful that Trump would have altered his tirade at the behest of appeals for international comity. How could he? Why would it be? Trump’s whole point in addressing the UN was to belligerently antagonize China because that is the essence of his “America First” ideology. It’s American nationalism on steroids.

The contrast with Chinese President Xi Jinping’s speech could not have been more stark. In his address, delivered after Trump’s, Xi spoke in a calm and statesman-like tone. He appealed for international cooperation, spoke of the world belonging to “one family” and called for “win-win” solutions. His speech was one of magnanimity and fraternal vision, fitting for an organization that predicates its establishment on a common humanity and non-aggression. There was no boasting of Chinese military prowess. Beijing has no intention of fighting a “Cold War or a hot one with any country,” he said, adding: “China is the largest developing country in the world… committed to peaceful, open, cooperative and common development.”

The Chinese leader did not mention the US by name, but it was notable that Xi repeatedly reminded why the UN was formed 75 years ago following the defeat of fascism.

Two leaders spoke. One looking forward to the future with a progressive and peaceful vision, while the other – Donald Trump – sounded as if he had returned to choke on the bitter ashes of war seven decades ago.

Indeed the world is heading in a dangerous direction with the likes of Trump and his toxic politics of aggression and American exceptionalism (supremacism). But maybe with leaders like Xi, the world might transcend the toxicity.

And, by the way, Joe Biden would hardly make much difference. His is only a difference in style, not substance. It’s not just about Trump the individual, obnoxious though he is. It’s about American power and how it operates unilaterally and violently in the world.