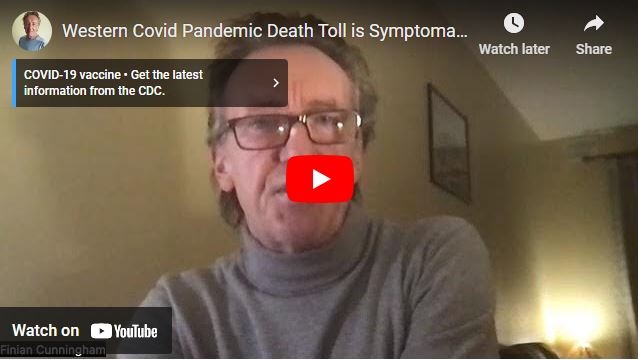 In the news this week, November 21, China has recorded one death from Covid-19 – that’s the first death in about six months officially recorded in China.

Meanwhile, in the United States and across Europe there are thousands of Covid-related deaths occurring every single day, not every six months.

These Western figures may be a lot less than the 4,000 deaths per day that was seen last winter. Nevertheless, the daily toll in the United States and Europe is a reminder that the pandemic has certainly not gone away, nor is anywhere near contained.

The United States is the world leader for Covid death toll. In two years since the global pandemic was declared, the US has incurred over 1 million deaths.

By stark contrast, the death toll from Covid-19 in China is approximately 5,000.

In other words, China’s death toll is about 0.5 percent of the US.

That comparison also needs to take into account that with 1.4 billion people, China’s population is nearly four times that of the United States. Four times the population yet only a tiny fraction – 0.5 percent – of the US deaths from Covid-19.

Even if we doubt the exact accuracy of these figures, the sheer scale of difference – by three orders of magnitude between the United States and China – should alert us to something profound and deeply disturbing.

And that is – that disease and death are acceptable under the capitalist system. Not just accepted but actually increased.

The fact is that China’s socialist system puts the protection of public health above the interests of commerce and short-term economic gains.

China adheres to a zero-Covid policy involving the use of vaccines, as well as society-wide lockdowns, quarantines, and mass testing and tracking of the disease for isolation and eradication.

By total contrast, however, in the United States as with other capitalist nations, the policy is one of zero effort to contain Covid-19. Because the top priority – indeed the paramount priority – is protecting private profit over public health.

The United States and other Western countries are pursuing a policy of so-called “living with Covid” which actually translates into the callous and criminal reality of people “dying with Covid”.

China’s success in controlling the Covid-19 pandemic and containing the number of deaths is truly remarkable. This success also serves as a condemnation of the perverse priorities of capitalism – whereby disease and death are normalized.

The Covid-19 pandemic is a shocking illustration of the pathology of capitalism. China shows how socialism provides effective public health management. A socialist approach is not only more ethical but actually more viable as an economic system because it is motivated by long-term public good and well-being for the many rather than private profit for the few.

A pathological system such as capitalism is not viable or sustainable. The pandemic clearly demonstrates how capitalism – and the most virulent US variant of capitalism – is a disease that humanity needs to overcome.

U.S. Versus China Covid Deaths – A Symptom of Diseased Capitalism

U.S. Versus China Covid Deaths – A Symptom of Diseased Capitalism

The CDC’s War on Children’s Health

The Covid Pandemic Was Entirely Unnecessary

A Birth of Tragedy

US Publisher: What if COVID Outbreak is Part of the Pentagon’s Biowarfare Plan?