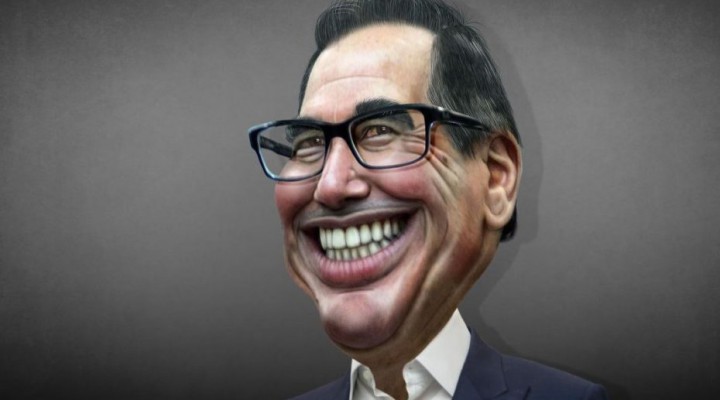 US Treasury Secretary Steve Mnuchin seems to think that nations under the hammer of American sanctions should be thanking Washington for not attacking them militarily instead. How generous, how virtuous of Uncle Sam!

Speaking at the Doha Forum in Qatar last week, Mnuchin made a virtue of the US imposing economic sanctions on countries it dislikes because such measures, he claimed, were a way to avoid the worse alternative of war.

“The reason why we’re using sanctions is because they are an important alternative for world military conflicts,” said the US Treasury Secretary.

The sleight of hand here is to portray Washington as somehow being more responsible and principled in its foreign policy by using coercion against other nations supposedly without harming civilians, damaging infrastructure or spilling blood.

Billionaire Mnuchin is living in a bubble of American propaganda if he thinks that economic sanctions are some kind of sterile lever which do not have any impact on human suffering. Sanctions are acts of war, conducted as other means to troop invasions, air strikes and naval blockades.

International lawyer and former UN diplomat Alfred de Zayas calls the sanctions imposed by the US on Venezuela “economic terrorism”. Tens of thousands of Venezuelans are estimated to have died as a result of Washington’s tightening embargo on the South American country since 2017.

Iran’s government has also condemned US sanctions on its nation as “economic terrorism”. So too has Syria, North Korea and Cuba – the latter having been embargoed by the US for nearly six decades without relent.

Typically, sanctioned countries cannot import vital medicines and medical equipment due to US restrictions on banking systems and trade. That leads to premature deaths from terminal illnesses that go untreated, and to worsening health of vulnerable sections of the population, the young and elderly. Less perceptibly, but no less real, is increased mortality from general deprivation caused by sanctions-hit economies.

Remember how former US Secretary of State Madeleine Albright infamously admitted on national TV that American sanctions killed 500,000 children in Iraq during the 1990s, and with monstrous callousness added, “it was worth it”.

Steve Mnuchin claims with barefaced lies that US sanctions do not impinge on humanitarian supplies to targeted countries. That is contradicted by independent international observers who have visited Syria, Iraq, Iran, Venezuela and North Korea where US sanctions have decimated public health services. See this article by independent journalist Eva Bartlett who visited several of the aforementioned countries.

Indeed, the whole purpose of sanctions is to deliberately ravage populations in order to provoke widespread social instability and ultimately regime change.

The practice of unilateral sanctions by the US should be banned under international law as a form of aggression against nations. It is an act of war and, without just cause of self-defense, is therefore a war crime.

Mnuchin’s cynicism pretends that sanctions are a valid legal instrument of foreign policy which are qualitatively different from military warfare. His nauseating attempt to claim that the US is acting with restraint by using sanctions “instead of war” is absurd.

Sanctions are part of the US arsenal to harass and subjugate other nations which Washington deems to be recalcitrant to achieving its geopolitical objectives.

Historically it is seen that economic assault on countries is often the prelude to all-out war. The good “alternative” that Mnuchin talks of is delusional.

Recall how US sanctions against Japan in the 1930s aimed at cutting off the latter’s oil imports led to Japan precipitating the Pacific War with the attacks on Pearl Harbor on December 7, 1941. Arguably, the war’s inception was not at Pearl Harbor, but rather found in the prior US policy of strangulating Japan economically.

That’s what makes the current sanctions on Iran by the Trump administration a matter of grave concern. The US economic blockade seems aimed at forcing Iran to make a retaliatory move which would then be cited by Washington as “justifying” American military action. But let’s put those sanctions in proper context. They were imposed unilaterally by the Trump administration when it tore up its signature in May 2018 to the treaty-binding international nuclear accord. Bad faith has been followed by economic aggression, which may, in turn, lead to open military aggression. Thus, sanctions are part of a sliding scale of war, not some abstract benign alternative to war, as the US Treasury Secretary likes to pretend.

What is more disturbing is the increasing use of sanctions as a normal foreign policy by the Trump administration.

The list of nations under US sanctions continues to grow. In addition to countries mentioned above are several others, primarily Russia and China. Countless layers of sanctions originated by the Obama administration have been added on to Moscow by the Trump presidency. The vague and unverified nature of US claims invoked to implement these sanctions against Russia are in themselves provocative.

The threat of American sanctions against Russia’s Nord Stream-2 mega project for increasing gas exports to Europe is perhaps the most egregious example of using economic instruments gratuitously to pursue geopolitical interests. Not only Russia but also European “allies” of the US are being threatened with sanctions over Nord Stream-2.

Nord Stream-2 clearly illustrates how US sanctions are another instrument of unlawful aggression and coercion for achieving American interests.

The complacency of Mnuchin’s virtue-signaling belies a brutal truth. Far from avoiding war, Washington is more and more at war with the rest of the planet by using economic aggression, terrorism and bullying.

The would-be US hegemon is increasingly out of control, no longer restrained by the superficial need for appearance of legal niceties. The international tensions it is stoking by its wanton tyranny are creating a dangerous threshold. US economic warfare through sanctions has ensured that catastrophic military war is but one fatal slip away.