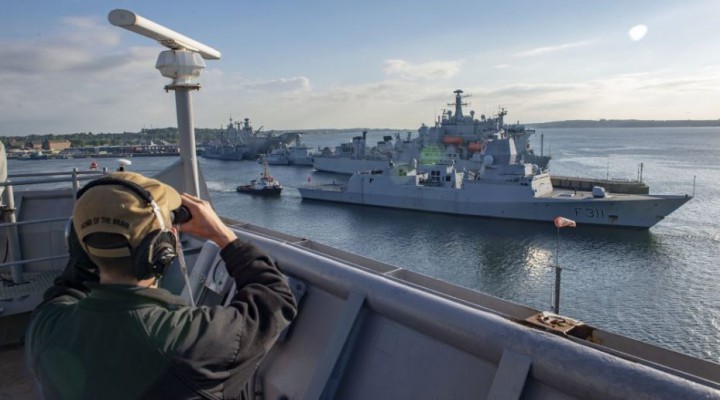 There is little doubt that the Western military alliance is attempting to turn the Baltic Sea into a “NATO lake.” Certain Western interests want to make it a zone of war.

It was like a day from the 1970s. Except the close encounter between a Russian SU-27 fighter-interceptor and a US Air Force RC-135V intelligence-gathering plane and a Swedish Gulfstream IV spy plane occurred on June 10. The incident, which occurred within Polish maritime airspace near the airspace of the Russian Kaliningrad region, resulted in diplomatic protests being lodged with the Russian Foreign and Defense ministries by the US embassy in Moscow.

The air encounter took place on the second day of the Baltops-2019 NATO naval and air exercise in the Baltic Sea, in which the United States, Sweden (a non-NATO member), and sixteen other nations, including non-NATO member Finland, were taking part. Not taking part in the exercise were NATO members Greece, Hungary, Luxembourg, Canada, Czechia, Slovakia, Bulgaria, Slovenia, Iceland, Croatia, and Montenegro. The exercise was scheduled for June 9-21.

The Baltops exercise was being held under the command of the newly-reconstituted US Second Fleet, which is headquartered in Norfolk, Virginia. The annual exercise concludes with the participating ships and submarines sailing to Kiel in Germany to participate in the annual Kielerwochen naval parade, which also serves an opportunity for sailors to drink copious amounts of beer during the week-long festivities.

There is little doubt that the Western military alliance is attempting to turn the Baltic Sea into a “NATO lake.” With Sweden and Finland now openly participating in NATO military exercises and making no real secret of their participation in the operations with the FIVE EYES signals intelligence alliance of core members Britain, the US, Canada, Australia, and New Zealand, there is but one nation in the Baltic that remains both outside the NATO construct and NATO’s sole target: Russia.

NATO and its “non-member” partners, Sweden and Finland, have upped Baltic military tensions over the proposed Russian Gazprom’s Nord Stream 2 natural gas pipeline that will provide Russian gas directly to Germany. The pipeline passes just south of the Danish island of Bornholm, which lies closer to Sweden that it does to Denmark. Four countries involved in Nord Stream 2 have approved plans for the pipeline’s construction. The only holdout is Denmark. Donald Trump has praised Denmark’s refusal to back Nord Stream. However, Trump’s praise for the decision of Danish right-wing prime minster Lars Lokke Rasmussen was both premature and short-lived. On June 5, a “red alliance,” consisting of incoming Prime Minister Mette Frederiksen’s Social Democrats, along with the Social Liberals, Socialist People’s Party, the Red–Green Alliance, the Faroese Social Democratic Party, and the Greenlandic Siumut defeated Rasmussen’s rightist coalition in the general election.

As prime minister, Frederiksen is widely believed to want Denmark to reassert its independent foreign policy without taking orders from Washington, especially from an American administration that opposes the social democratic, environmental, and civil liberties platform of the Social Democrats and their coalition allies. The Red-Green Alliance favors Denmark’s withdrawal from NATO.

Frederiksen will be forced to deal with the Danish Intelligence Service (“Forsvarets Efterretningstjeneste” or FE), which has helped to turn Denmark into an intelligence ally of the US National Security Agency and a stalwart member of the Nordic intelligence alliance of Denmark, Norway, Sweden, and Finland that has existed since the days of the Cold War.

After never really adjusting to the realities of the post-Cold War era, the FE is still organized as a NATO Baltic front line intelligence service geared up for the defense of the Baltic Straits from military action from a non-existent German Democratic Republic and USSR, as well as a non-existent Warsaw Pact member, Poland. The FE’s signals intelligence (SIGINT) capabilities (for example, from its Sandagergård SIGINT station at Aflandshage near Copenhagen) are targeted against commercial satellite communications traffic. The FE’s SIGINT unit has little or no capability to target Middle East communications. The FE’s small budget has resulted on its over-reliance on hugely sanitized and overly-edited intelligence from the Central Intelligence Agency. What the Danish intelligence analysts receive from the CIA is not that much more revelatory than what one can normally read in The Economist magazine, Financial Times, or the New York Times. For example, the FE continues to emphasize outmoded language skill sets – Russian, German, and Polish – while paying scant attention to the more critical Arabic, Farsi, Urdu, Tamil, Turkish, and Kurdish languages spoken by many immigrant and first- and second-generation Danish citizens.

There have been suggestions from within the FE for it to build its own ship-based SIGINT platforms that would independently collect intelligence from the Persian Gulf, Arabian Sea, and other hot spots involving Danish interests. However, the Danish government is content with its very junior status to the Americans. The rising importance of Sweden’s airborne SIGINT fleet of aircraft, including the Gulfstream IV spy plane intercepted by the Russian SU-27 near Kaliningrad, is witnessed by the fact that Sweden and the United States have totally integrated their airborne SIGINT capabilities under the NATO umbrella. In many ways, Sweden’s National Defense Radio Establishment or “Försvarets radioanstalt” (FRA), which operates Sweden’s SIGINT aircraft, including the Gulfstream IV intercepted by Russia with the US RC-135V, has become an even more important ally for the United States than the SIGINT agencies of full NATO members.

Although Sweden and Finland are dragging their political feet on joining NATO, their military policies have made both countries de facto members of the military bloc. While the Baltic Sea is not yet a “NATO lake,” the same cannot be said of the Gulf of Bothnia between Sweden and Finland. Finland’s VKL (“Viestikoelaitos”) SIGINT agency is a close partner of the NSA. The US Navy has also reportedly shared a passive sonar “library” of Russian submarine acoustic signatures with their Finnish and Swedish naval counterparts. In addition, naval intelligence cooperation between the navies of the United States, Sweden, Finland, Denmark, and Estonia in monitoring activities in the Gulf of Finland has never been greater. But why? The Cold War has been over for some two decades and northern Europe, frankly, has other worries, from climate change to the threat of re-emerging threats from Nazi and fascist political movements.

If Denmark should drift away from NATO intelligence activities in the Baltic, its place will gladly be taken by Poland. Polish President Andrzej Duda, who has established a close relationship with Trump, has agreed to foot the bill for the construction of US military bases in Poland. However, the NSA has been in Poland for several years and works with its Polish counterparts to extend a giant electronic intercept “ear” over Kaliningrad. Since 2013, NSA personnel have worked with Polish SIGINT analysts at a joint intercept in Olsztyn. The Olsztyn “outstation,” which is codenamed AMBERWIND, conducts electronic and communications intercepts of Russian military and other communications in Kaliningrad, the headquarters of the Russian Baltic Fleet. Just as with the troop bases in Poland, the Poles helped pay for the NSA SIGINT facility.

NATO and Trump are trying to have it both ways. While Trump has done everything possible to stymie the construction of Nord Stream 2, his national security policy makers have warned Russia not to interfere with Baltic undersea fiber-optic communications cables or the NordBalt power cable between Klaipeda, Lithuania and Nybro, Sweden. During the Cold War, there were serious suggestions from Sweden, Finland, the USSR, Poland, and even Denmark and Norway for the Baltic region to become a “zone of peace.” It appears that during a time of peace, certain Western interests want to turn the Baltic into a zone of war.