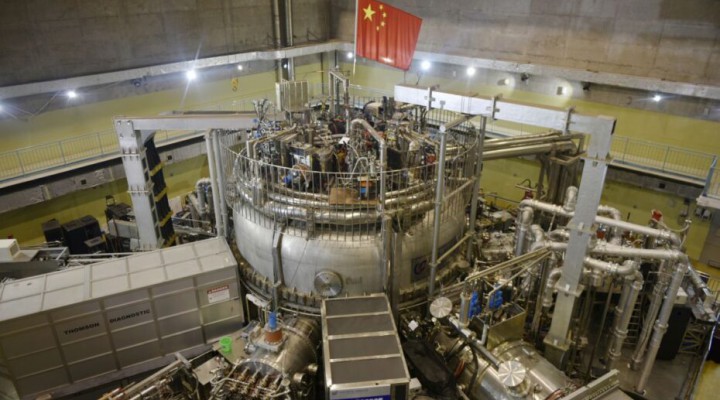 China is providing the equivalent scaremongering of the Soviet “missile gap” in order to sustain America’s militarist-dependent capitalist economy.

Media reports from the U.S. this week – regurgitated by the European press – highlighted concerns that China is embarking on a massive scale-up of underground silos for launching nuclear weapons.

Hundreds of silos are alleged to be under construction in the western regions of Xinjiang and Gansu, according to U.S. media reports citing commercial satellite data. American military officials and State Department diplomats are quoted as saying they are “deeply concerned” by the purported expansion of China’s nuclear arsenal.

For its part, Beijing has not yet commented on the claims of new nuclear silos. Some Chinese media reports say that the excavation could be due to something else entirely – the construction of large-scale wind farms. A Global Times dismissed the U.S. claims as “hyped”.

Context, as ever, is crucial. For a start, the U.S. headlines are equivocal and heavily qualified, indicating that the information is far from conclusive.

Despite the lack of definite information that didn’t stop Pentagon and government officials from saying they were “deeply concerned”, thus adding a veneer of factuality to reports that were speculative.

Here’s another consideration. So what if China is expanding its nuclear arsenal with new silos? The People’s Republic of China has a stockpile of warheads numbering 350. The United States has a stockpile of some 5,550 warheads, according to the Stockholm International Peace Research Institute.

The U.S. has a nuclear offensive power 15 times greater than China. So even if China is planning to double its arsenal of nuclear weapons, according to the Pentagon, that increase is still a fraction of American destructive capability.

Beijing maintains that the onus is on Washington to de-escalate its nuclear arsenal. The United States and Russia have resumed talks this week in Geneva on renewing arms-control efforts – efforts that have been put on hold by Washington since the Trump administration. Washington and Moscow – both possessing over 90 percent of the world’s total nuclear warheads – need to get on with their obligations for disarmament before China is reasonably brought into the discussion, along with other minor nuclear powers, such as Britain and France.

Another consideration for context is the ramping up of hostility by the United States towards China. The Biden administration is continuing the aggressive agenda of its Trump and Obama predecessors. Arming the renegade Chinese island territory of Taiwan, sailing warships into the South China Sea, media vilification of China over allegations of human rights abuses, genocide, malign conduct in trade, cyberattacks, and the Covid-19 pandemic. All of this speaks of stoking confrontation with China and inflaming U.S. public opinion to accept war with China.

Pentagon officials tell Congressional hearings that they consider war with China a distinct possibility in the near term.

Given this context, it would be reasonable to expect China to expand its nuclear defenses in order to shift the American calculation away from contemplating a war. The problem is not the alleged Chinese military buildup. It is Washington’s criminal policy of hostility towards Beijing that is fueling the risk of war.

But here is another key factor: the United States is undergoing a trillion-dollar upgrade of its nuclear arsenal. That began under Obama and was continued under Trump and now Biden. That puts alleged Chinese expansion into perspective. The United States has already nuclear power that dwarfs China’s and yet the U.S. is expanding what is a provocative threat to China.

Furthermore, Washington’s nuclear upgrade of its triad of submarines, silo-based intercontinental ballistic missiles and strategic bombers is hurtling out of control financially.

A recent report by the non-partisan Congressional Budget Office warned that the trillion-dollar nuclear upgrade was ballooning with “stupefyingly expensive” cost overruns. In just two years, the cost was over-budget by $140 billion and the upgrade program is to run for a total of three decades.

This eye-watering waste of taxpayers’ money has led some U.S. lawmakers to call for drastic cuts in nuclear arms expenditure. Senator Ed Markey and others have decried “our bloated nuclear weapons budget”. Given the crumbling state of America’s civilian infrastructure, popular opposition to exorbitant military spending is potentially a major political problem for the Pentagon and its industrial complex.

The U.S. media hype over the alleged expansion of Chinese silos begins to look like déjà vu of the alleged “missile gap” with the Soviet Union during the Cold War. In the 1950s and 60s, Washington and the compliant corporate media became animated by CIA data that purported to show the Soviet Union outpacing the U.S. in the numbers of nuclear missiles. It turned out that the “missile gap” was non-existent. But the fear-mongering it engendered, in turn, created public acceptance of massive military expenditure by Washington that has become structural and chronic to this day. The warped allocation of financial resources is a parasitical drain on American society. Any rational, democratic mind would abhor the grotesque priorities.

China today is providing the equivalent scaremongering of the Soviet “missile gap” in order to sustain America’s militarist-dependent capitalist economy.