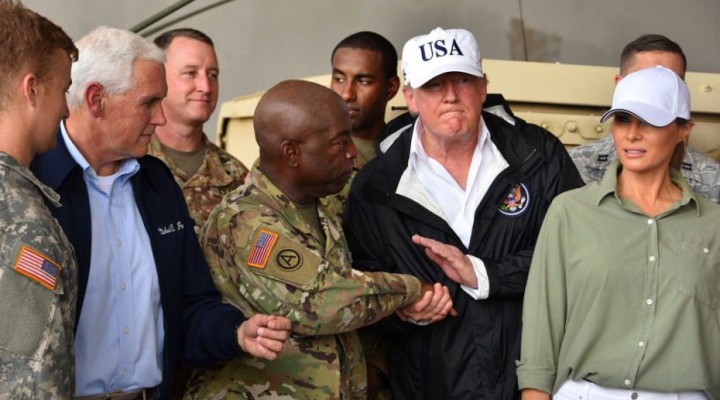 In trying to assert US control over Russia and China, Trump seems prepared to risk eroding global security and dialing down the threshold for a nuclear war.

US President Donald Trump has previously threatened to unleash a nuclear arms race against Russia and China – and “win it”. Despite the bravado, the gambit is paradoxically a sign of strategic weakness by the US in terms of not being able to match Russia’s new hypersonic weapons, and secondly, not being able to contain China’s rise to power.

It is a high-stakes, not to say reckless, venture by Trump. In trying to assert US control over Russia and China, he seems prepared to risk eroding global security and dialing down the threshold for a nuclear war.

A giveaway in the logic was Trump’s dubious claim last week that his administration was talking with both Russia and China on forming a new arms-control agreement. It seemed like a turnaround from his previous belligerent rhetoric about winning an arms race.

The purported talks that Trump refers to seem a figment of his imagination.

Just last week, Russian Foreign Minister Sergei Lavrov deplored the lack of reciprocation from the Trump administration on repeated efforts by Moscow to negotiate over “strategic stability” and arms control.

Meanwhile China, as reported by the Wall Street Journal, following Trump’s comments, said it was not interested in engaging in arms-control talks with the US until Washington agrees to first reduce its much greater nuclear arsenal.

The significance of Trump’s remarks regarding his phantom talks with Moscow and Beijing is the linkage he makes between all three engaging in arms control.

This US objective of linking China with Russia for arms controls would explain why the Trump administration is balking at renewing the New Strategic Arms Reduction Treaty (New START) with Russia. That treaty is set to expire in February 2021.

As Lavrov said at a non-proliferation conference in Moscow on November 8: “Signals out of the US do not inspire any optimism about the future of the treaty.”

Russia has urged the US to maintain the New START treaty, which Moscow calls the “gold standard” in limiting long-range nuclear weapons. It was signed in 2010 by President Barack Obama and then-President Dmitry Medvedev. The accord aims to limit the number of strategic warheads to 1,550 each for the US and Russia. The treaty requires a formal renewal in under two years, or else it collapses. Trump has continually hinted his administration is not going to uphold it, which he has previously disparaged as a “one-sided” treaty.

In an interview with the Financial Times earlier this year, President Vladimir Putin warned that if the US jettisons the treaty then a global arms race is a real danger.

American experts have also made similar admonishments to the Trump administration. Ernest Moniz, the Energy Secretary during the Obama administration, gave a grim assessment if New START is allowed to lapse.

“It’s going to raise hell for the global non-proliferation regime,” said Moniz, as quoted by the Wall Street Journal.

The Trump administration appears to using a version of Nixon’s “mad man theory” whereby opponents are intimidated by reckless ambiguity.

By reneging on New START, Trump is seeking to gain leverage on two important issues.

First, he is gambling that Russia will be put under duress with the threat of a crippling arms race and will therefore be coerced into persuading China to join a new trilateral arms control deal with Washington and Moscow.

In a media interview last week (at 7-min section), Russia’s top diplomat Sergei Lavrov condemned the lack of engagement by the US on arms controls. He said: “Sadly, we haven’t seen any comprehensive answers [from the US].” Notably, he added: “The only thing they say that they want is to involve China in this [arms controls].”

China is not a signatory to the New START treaty. Its nuclear arsenal is reckoned to comprise around 300 warheads which is far smaller than either the US or Russia’s arsenal, estimated to be around 6,500 each, according the Arms Control Association based in Washington DC.

What China has developed, however, is a formidable range of short and medium-range cruise missiles. Those missiles can’t reach North America but they do present a severe challenge to American warships patrolling Asia-Pacific.

It was to counter this perceived Chinese threat that lay behind the Trump administration’s reason to cancel the Intermediate-range Nuclear Forces (INF) Treaty with Russia earlier this year. American claims that the move was prompted because Russia had breached the treaty are disingenuous. The real motive for Washington was to free its hands from the INF so that it could confront China with short and medium-range missiles banned by the INF.

Thus, the Trump administration is whipping up global insecurity by posturing to ditch the New START in the calculation that Russia will do its bidding with regard to corralling China into a supposedly new “grand bargain”.

Russia has adamantly said it will not act as Washington’s lever on China. If the US were serious about forming a comprehensive global arms-control mechanism, then it would not be threatening to rip up the New START. As Moscow also points out, why aren’t Britain and France also being involved in Trump’s so-called “grand bargain”?

As the Arms Control Association puts it: “Extending New START would provide a necessary foundation and additional time for any follow-on deal with Russia that addresses other issues of mutual concern, including non-strategic nuclear weapons, intermediate-range weapons, and understandings on the location and capabilities of missile-defense systems and advanced conventional-strike weapons that each country is developing.”

In other words, it does not make sense to scrap the New START. There is obviously an ulterior motive for the Trump administration.

The other major objective for the US is to curb Russia’s new suite of non-nuclear hypersonic weapons. In this field, Russia is way ahead of the Americans. While the Pentagon has been squandering trillions of dollars on criminal wars and regime-change operations over the past two decades, Russia has developed a whole new class of weapons that can evade any missile-defense system. Washington realizes it has been outmaneuvered strategically.

Hence, Trump’s contradictory call for a new arms-control treaty is in fact motivated by seeking to control China and Russia’s new hypersonic weapons. And in order to force his demands, Trump is using the threat of a global arms race by abandoning New START. But, ironically, what that desperate calculus shows is Washington’s strategic weakness with regard to Russia and China.