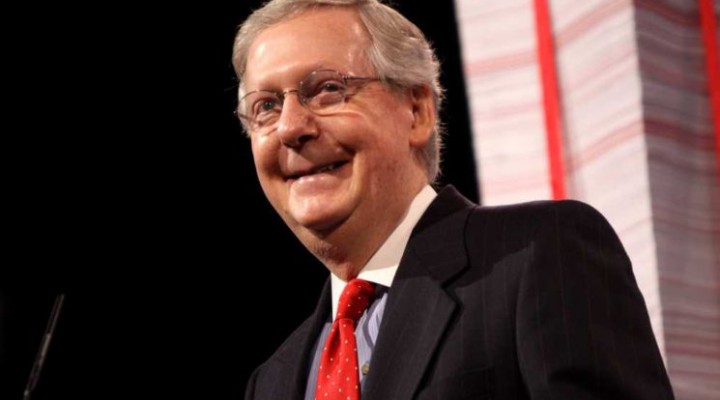 The collapse in rational thinking among American and British political mainstream circles is highlighted by the rampant Russophobia. Such thinking is delusional, paranoid and ultimately horrifying at a time of heightened international tensions between nuclear superpowers.

Arch Republican Senator Mitch McConnell is being taunted by major US media outlets and at political rallies as a “Russian asset”. Meanwhile, Britain’s Daily Telegraph reports on “super-secret” Russian submarines which are “operating unseen” in British territorial waters.

The collapse in rational thinking among American and British political mainstream circles is highlighted by the rampant Russophobia. Such thinking is delusional, paranoid and ultimately horrifying at a time of heightened international tensions between nuclear superpowers.

First, let’s deal with the farcical furore over Senator McConnell being labelled a Russian asset. The Senate majority leader has been dubbed by US news channel MSNBC and the Washington Post as “Moscow Mitch” and “doing Putin’s bidding”. The monikers followed McConnell’s blocking of legislation aimed at tightening security of electoral systems ostensibly to prevent “foreign meddling”.

It’s not clear why McConnell objected to the proposed legislation. It seems he doesn’t agree with extra federal controls over state-level electoral systems. Also, he claims that hundreds of millions of dollars have already been spent upgrading electoral systems, and therefore additional expenditure is not warranted. He is a fiscal hawk after all.

Nonetheless, it is a preposterous leave of senses when paranoid Russophobia in US politics and media are inferring that McConnell’s opposition to the proposed electoral legislation is “evidence” that he is a Russian agent, by allegedly enabling Russian hacking into US elections.

At a recent political event in his home state of Kentucky, McConnell was heckled and booed by Democrat supporters chanting “Moscow Mitch, Moscow Mitch!” The protesters were wearing T-shirts and brandishing placards with images of McConnell donning a Cossack hat with Soviet-era hammer and sickles.

Understandably, the 77-year-old senator has reacted with aghast over the political attacks. He called it “modern-day McCarthyism” harking back to the Cold War years of Red Baiting. He even said it was worse that the past McCarthyism. And he has a point there.

McConnell’s exasperation is borne out of the complete irrational vacuousness of the accusations. The six-time elected lawmaker is the longest-serving Republican senator. He is a grandee of the traditionally rightwing party, with an “impeccable” record of being hawkish towards Russia and President Vladimir Putin.

How anyone can construe that good ole boy McConnell is a Russian stooge is too absurd for words. What the accusations do betray is the total derangement and politically illiterate condition of mainstream American political and media culture.

As Princeton Professor Stephen Cohen remarked in a recent interview Russophobia and paranoia over alleged interference in US politics has become a permanent mindset among too many American politicians, pundits, military-intelligence agencies and Democrat supporters. Cohen rightly deplores how the whole baseless narrative of “Russia-gate” continues with a life of its own, having not been finally made redundant after the two-year Mueller probe spectacularly failed to provide any substantive details or evidence.

Still, however, former FBI chief Robert Mueller in recent hearings before Congress was permitted to reiterate hollow accusations that Russia meddled in the 2016 presidential elections and, he asserted, Moscow will do so again in the 2020 elections. This is simply doctrinal thinking which is, in turn, accepted as “fact” that Russia’s President Putin ordered an “interference campaign” to subvert American democracy. (Moscow has always vehemently rejected that.)

That’s why when someone as antipathetic towards Russia as Senate leader Mitch McConnell exercises relative sanity by rejecting the alleged need for more electoral security systems to “prevent foreign meddling” he is then assailed with hysterical accusations of being a “Russian asset”. The utter irrationality is self-reinforcing because of unhinged delusions about Russian malignancy. No evidence is required. It’s “true” because “we believe it is true”.

McConnell has hit back at his detractors by calling them “leftwing hacks” and “communists”. He made that conclusion by referring to the Democrats’ policy of seeking to expand free healthcare for American citizens. He proudly called himself the “Grim Reaper” who would protect America from a “socialist agenda”.

This inane back and forth demonstrates how dumbed down American political culture is. Increasingly bitter partisan accusations and slander are flying around based on no facts, no evidence, no reason, nor any intelligent understanding about policy, history or political philosophy.

But, lamentably, at bottom the crazed political discourse relies on an embedded Russophobia. Russia is viewed as evil and malicious, by both sides of the political coin. Rather than addressing inherent problems in American society, the discourse finds a common false explanation – blame it on Russia or association with presumed communism. The Cold War nihilism of American politics and propaganda has never stopped. It’s just become more delusional and divorced from any semblance of reality. In this context, the modern-day Russophobia is perhaps more dangerous because of its irrationality and evidence-free doctrinal thinking.

Which brings us to the “super-secret” Russian submarines that are stalking Britain, according to the Daily Telegraph. The so-called report (more accurately, psy-ops piece) is a must-read for exposing the delusional anti-Russia paranoia that the British political class have in common with the Americans.

“A new breed of super quiet Russian submarines are feared [sic] to be operating unseen [sic] in British territorial waters, according to military sources [sic],” the Telegraph claimed.

The sources were, as usual, anonymous, betraying that the Telegraph was being used, as it often is, as a conduit for British intelligence propaganda.

Not one scrap of evidence was presented to substantiate these “fears” of “unseen” Russian submarines. Supposedly, the “unseen” vessels are “proof” of how dastardly and stealthy those damn Russians are. The point of the article was to deliver a public message for more military spending on Britain’s Royal Navy.

What makes it possible for the Daily Telegraph to publish such bogeyman rubbish is because of the systematic inculcation of Russophobia among many, but not all, Britons.

As with its American counterpart, British political culture has become degenerate and depraved. It is the equivalent of medieval sorcery and “magical thinking”. Standards of proof, reason and due process have been abandoned. It’s like a regression to pre-Enlightenment times. The fact that the US and Britain possess nuclear arsenals aimed at Russia makes the deranged thinking of their political class a truly frightening prospect for the entire world.

The Orchestration of Russiaphobia Is The Prelude To War