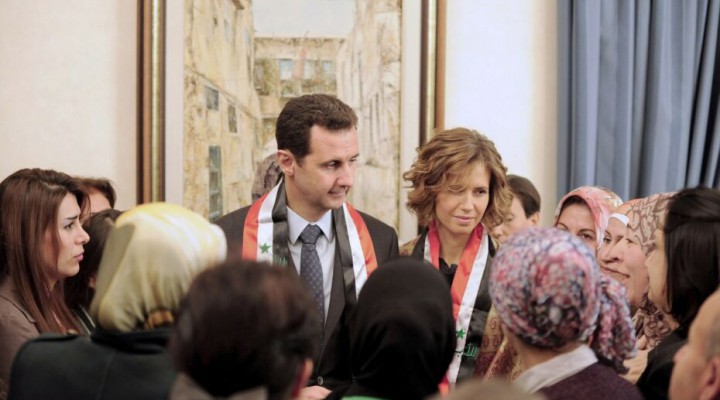 Threatening Syria’s First Lady – a national heroine – with prosecution for war crimes is NATO powers reaching into the gutter.

This week marks the 10th anniversary since the United States and its NATO allies launched a devastating covert war of aggression for regime change in Syria. Ten years on, the Arab nation is struggling with war reconstruction, a struggle made all the more onerous because of economic sanctions imposed by the United States and the European Union.

Syria and allied forces from Russia, Iran, Iraq and Lebanon’s Hezbollah won the war, defeating legions of mercenary terrorist fighters who were armed and infiltrated into Syria by NATO. Nearly half a million Syrians were killed and half the pre-war population of 23 million was displaced.

But tragically the war is not over yet. It has moved to new hybrid phase of economic warfare in the form of Western sanctions and blockade on Syria.

The barbarity of Western sanctions on Syria have necessitated the cover of distractive media narratives.

This explains the sensation of British media reports that Asma al-Assad, the wife of Syrian President Bashar al-Assad, is being investigating by London’s Metropolitan police for war crimes. Asma (45) was born in London, was educated there and holds British nationality. Although she has Syrian heritage.

Now British authorities are mulling stripping her of nationality and seeking her extradition over charges that she aided and abetted war crimes, including preposterously, the use of chemical weapons against civilians. There is practically no chance of a prosecution, but that’s not the British aim. Rather it is all about smearing the Syrian leadership and distracting the world’s attention from the real issues: which are the criminality of NATO’s war on Syria and the ongoing economic warfare to destroy the nation into submission.

Asma married Bashar in 2000. Before the war erupted in March 2011, she was eulogized in Western media as the “desert rose” owing to her feminine beauty and quietly spoken graceful persona. The daughter of a cardiologist and having had a career in investment banking before she become Syria’s First Lady, Asma al-Assad later showed herself to be no wilting flower. She refused to leave Damascus and go into comfortable exile with her children when the war was raging.

She remained loyally by her husband’s side and took on the role of consoling the nation, often visiting families of slain soldiers and civilian victims of NATO’s terror gangs.

No doubt the stress resulted in Asma suffering from breast cancer for which she was successfully treated in 2018.

President Assad and his wife stood by the Syrian nation when the jaws of defeat were looming during the early years of the war. When Russia intervened in support of its historic ally in October 2015, the tide of the war turned decisively against the NATO plan for regime change. Assad was singled out for regime change because of his anti-imperialist position against the U.S., Britain, France and Israel. His alliance with Russia, Iran and Lebanon’s Hezbollah put a target on his back for destruction, as former French foreign minister Roland Dumas disclosed. Dumas revealed that the British government had war plans on Syria two years before the violence erupted in March 2011. In this context, the so-called “uprising” was a carefully orchestrated false flag.

The mysterious shootings of police and protesters in the southern city of Daraa – which served to smear the Assad government internationally – were the same modus operandi used by NATO covert forces which carried out the sniper murders in Kiev’s Maidan Square triggering the February 2014 coup d’état in Ukraine.

Western media headlines this week marking the 10th anniversary since the beginning of NATO’s war on Syria have been ghoulish and nauseating.

There is a sense of gloating over the misery and hunger that the nation is facing.

A headline in Associated Press labels Syria as the “Republic of Queues”, reporting almost gleefully on how civilians are struggling with food and fuel shortages.

Nowhere in the media coverage is there a mention of how the American CIA and Britain’s MI6 ran Operation Timber Sycamore to arm and direct mercenaries to terrorize Syrians. Absurdly, Western media still claim that Syria’s war rose out of “pro-democracy uprisings” which were crushed by a “ruthless Assad regime”.

Barely acknowledged too is the fact that the United States, Britain and the European Union are strangling a war-torn nation with barbaric sanctions preventing reconstruction. The criminality of economic terrorism is the corollary of a failed criminal covert war of aggression.

The abominable reality of Western policy towards Syria has to be covered up. Threatening Syria’s First Lady – a national heroine – with prosecution for war crimes is NATO powers reaching into the gutter.