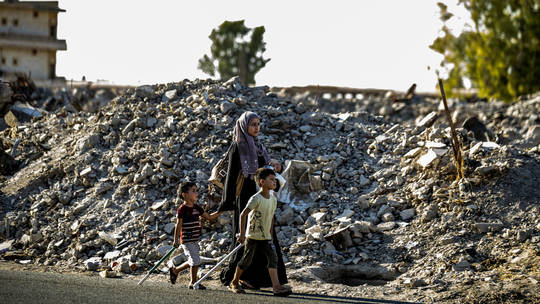 A supposed survey of war-torn Syria by America’s so-called “newspaper of record” was not merely shoddy journalism; it was a cynical attempt to rewrite the history of the eight-year war.

The meandering report of more than 2,700 words was headlined: “What ‘Victory’ Looks Like: A Journey Through Shattered Syria.” It would have been more accurate to have used the title, “What Gloating Looks Like.”

Even the sly way the word ‘victory’ is put in quotation marks indicates, from the outset, the insidious purpose of the article. To pour scorn on how Syria and its people have in actual fact defeated a foreign-sponsored criminal war for regime change. The regime-change plot goes back to at least 2005 as this old CNNinterview clumsily admits.

With mawkish words, the New York Times reporters effect to lament the rubble and grief among the Syrian population. But all the while, the implication conveyed is that President Bashar Assad “presided over the destruction.”

Bashar al-Assad’s image is everywhere, making it impossible to forget who presided over the destruction and who will preside over what comes next. Banners reading “Assad Forever” hang over many Syrian roads. https://nyti.ms/2z9CnNF 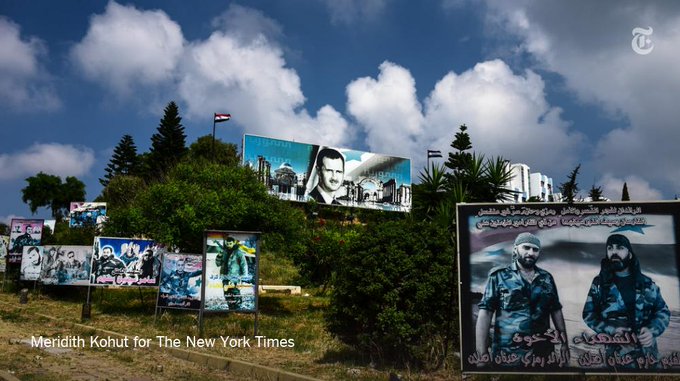 48 people are talking about this

It would be easy to dismiss the article for the ropey, agenda-led “journalism” that it is. But since journalism is reputed to be the “first draft” of writing history, it is therefore important that the distortion presented by the NY Times is repudiated for the outright falsification that it is.

We can’t go into every erroneous, obnoxious detail. And readers would be advised to go to alternative reports by independent journalists like Eva Bartlettand Vanessa Beeley for accurate accounts of how Syrians are dealing with the aftermath of war and what the people actually think about who caused their war-torn fate.

But suffice to say that three salient distortions or omissions can be cited to condemn the NY Times as a purveyor of propaganda. First is the staggering assertion that Syria’s lunar landscape of destruction was brought about by warplanes and artillery deployed by the state’s armed forces.

Secondly, there is not a single mention of US and other NATO states carrying out – and continuing to carry out – air strikes on Syrian infrastructure for the past five years, which have resulted in thousands of civilian deaths. Probably the most infamous episode was the American obliteration of the city of Raqqa two years ago during which an estimated 1,600 people, including women and children, were buried under rubble from indiscriminate bombing.

The NY Times would have us believe that Assad callously and gratuitously inflicted a pyrrhic victory on his people, instead of telling readers that the country was targeted covertly for regime change by the US, its NATO allies, and regional partners.

A third astounding distortion is the apparent absence of terror groups in Syria’s war. Not once is it mentioned that the militants who served as proxies for their foreign sponsors were mostly composed of Al Qaeda-linked terrorists recruited for their barbaric dirty work from all over the world and infiltrated into Syria by NATO operatives. Former urban areas like eastern Aleppo and Douma held siege under a reign of terror are referred to as “rebel-held” districts. The liberation of those hell-holes by Syrian government forces, supported by Russian airpower, is not reported as “liberation” but as something sinister, in complete disregard for how the Syrian people relate the events to the smarmy NY Times journalists. The latter presume to know better about what really happened, and consequently routinely infer that “regime minders” accompanying them are coercing the civilian interviewees to mouth pro-Assad propaganda.

Imagine the feat of mental gymnastics. In a supposed in-depth survey of war-ravaged Syria, there is not one reference to the army of jihadists belonging to Islamic State (IS, formerly ISIS/ISIL), Nusra Front, Jaish Al Islam, and dozens of other alphabet soup names used to conceal the fact that all were terrorist proxies weaponized by the US and NATO military intelligence.

What we have instead is the NY Times affecting a kind of grief and condescension towards the Syrian people who have been, it is claimed, plunged into misery by their government and its Russian ally. It is inconceivable, according to this narrative, that the Syrian people and their armed forces may have perhaps won the most dramatic, heroic battle in modern times against a behemoth of US-backed enemies whose terror tactics plumbed the depths of depravity.

Rather amusingly, if it weren’t so sickening, was a separate report by the NY Times only the day before which proclaimed that, “ISIS [Islamic State] Is Regaining Strength in Iraq and Syria”.

So, in the previous screed masquerading as a detailed survey of Syria, there is no mention of terror groups. Yet, in the second report the reader is told that the “Islamic State is on the rise again”. How is such a colossal contradiction entertained by the editors?

That other report kicks off with this laughable claim: “Five months after American-backed forces ousted the Islamic State from its last [sic] shard of territory in Syria, the terrorist group is gathering new strength, conducting guerrilla attacks across Iraq and Syria, retooling its financial networks and targeting new recruits at an allied-run tent camp, American and Iraqi military and intelligence officers said.”

Yes, that’s right, we are being told that US forces vanquished Syria’s terrorist tormentors from their “last shard of territory”. But now they are resurgent and “well-equipped” numbering about 18,000 fighters. We might indeed wonder how this change of good fortune happened for the militants. Could it be that powerful foreign sponsors are aiding and abetting once again? The NY Times never hints at such an obvious possibility.

The point of the article seems to be an attempt to undermine President Trump’s drawdown of US troops from Syria. The NY Times and its military intelligence sources are arguing for more American forces to be deployed in Syria and Iraq. “The resurgence [of terrorists] poses a threat to American interests and allies, as the Trump administration draws down American troops in Syria,” the report editorializes.

While the NY Times is cynically exploiting Syria for its own agenda-driven story-telling, the real task of defeating foreign-backed terror groups was continuing this week in Idlib province, northwestern Syria. The Syrian Arab Army captured the town of Khan Sheikhoun from militants affiliated to Hayat Tahrir al Sham (formerly Nusra Front, formerly Al Qaeda.) That is in spite of credible claims of armed support from NATO member Turkey whose military incursion into Syrian territory was pushed back. The US is also allegedly implicated in covertly arming the last redoubt of terror groups in Idlib.

Eight years of hideous war in Syria are coming to an end as Syrian state forces push on to claim every last inch of the nation’s territory from foreign intruders. The plain truth is that the Syrian people won a formidable victory against implacable malign powers, led by the US.

The systematic distortion and lies told by Western corporate-controlled media about Syria continues, even when victory against Washington’s infernal imperialist crimes is staring them in the face.

US Propaganda Blitz Ahead of Idlib’s Liberation