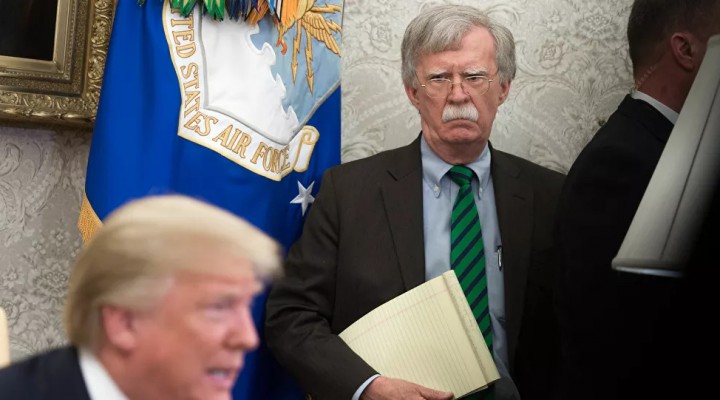 The implication is that the former national security advisor may divulge classified information which foreign enemies can exploit to penetrate US defenses.

Legal experts are arguing over whether Bolton is breaking the law in making classified details public. Trump is maintaining that all his conversations with White House staff are classified. The Department of Justice is seeking a restraining order on the book’s release, but it may be too late. Various news outlets have already published leaked sections of the memoir.

However, from reported excerpts of the text – which is due to be published next week if the Trump administration fails to get it banned – the greatest risk to US national security is not some arcane, sensitive information to do with defenses or grand misdemeanors. It is rather a more prosaic problem: the open knowledge that the president of the United States – supposedly the world’s most powerful office – is an utter buffoon.

How is a nation that presumes to be the leader of the world supposed to be taken seriously when it is run by an imbecile surrounded by flunkies?

So far as we can glean from Bolton’s memoirs, President Trump hasn’t a clue about matters of basic geography or politics. He thinks Finland is part of Russia, doesn’t know that Britain possesses nuclear weapons, and seems to believe that Venezuela belongs to US territory in which a military invasion would be “cool”.

Trump’s vanity and venality knows no bounds, according to his former aide, whom the president sacked in September 2019 after more than a year in the post of national security advisor. Bolton claims Trump begged China’s President Xi Jinping last year to help get him re-elected in the forthcoming US elections. When Xi declined that intrigue, Trump has presumably responded with pique by ratcheting up the trade war and vilification of China over the Covid-19 pandemic. If a Cold War can be pursued on the basis of petty personal huff, then the US and the world is surely in grave danger.

Can you imagine if such charges were made against Russian President Putin by a former advisor? Or China’s Xi? There would be Western media howls of horror at the global security implications.

But Bolton doesn’t come out of this debacle with any kudos either.
There is a distinct smell of rat in the air. He declined to bring his allegations of impropriety against Trump to congressional hearings during the impeachment trial against the president at the end of last year. Apparently, Bolton had his greedy eyes on securing the publishing deal for his memoir which reputedly earned him $2 million by keeping his dirty laundry under wraps. That hardly recommends his “tell all” claims as having integrity or principled motive.

Maybe Trump is right in dismissing the former aide as a “disgruntled boring fool”. No doubt, too, ardent Trump supporters will not be dissuaded from voting for him in November following Bolton’s perceived “treachery”.

​As a chief propagandist in the former GW Bush administration who made the fraudulent case for a genocidal war on Iraq, as well as wanting to bomb Iran for regime change and countless other aggressions, Bolton has a credibility problem, to say the least. It is also known that he was kicked out of his advisor post by Trump who accused him of “never seeing a war he didn’t like.” So, it’s a fair bet to assume that John “Mad Hatter” Bolton, has an axe or two to grind, and therefore what he says about his former boss in the White House should be taken with an outsized pinch of salt.

The unseemly squabbling is a slur on the office of the American presidency. A former advisor on matters of global importance and international security is diving into the sewer for a big pay day.

While the president mocks his former security aide – a position with one of the supposedly most onerous responsibilities – as a cranky old fool. No one comes out of this spat good, least of all the image of the United States.

Nonetheless, from what we know of Trump’s previous gaffes there seems to be a semblance of truth in Bolton’s depictions. After all, this is the president who thinks injecting household bleach could be a cure for COVID-19 and who engages in unhinged conspiracy theories. His insatiable, fragile egomania makes him flip with uncontrollable anger at every perceived slight.

The greatest national security for the United States is the knowledge that the guy with a finger on the nuclear button is a total buffoon.

How is a country to govern its own people when the highest office is a clown show? That is the real danger of Bolton’s book.