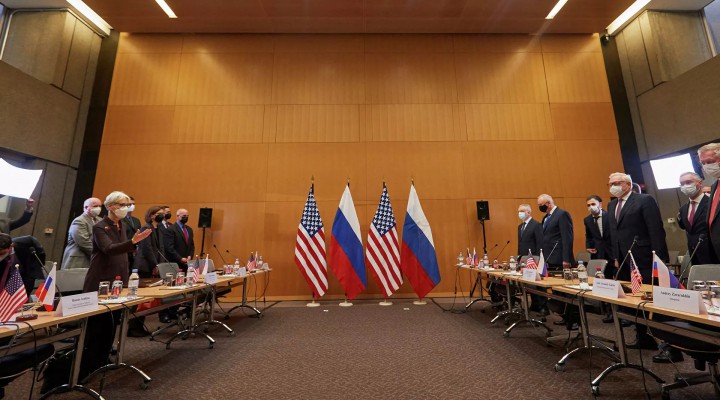 Anyone proposing the slightest diplomatic engagement with Russia – no matter how reasonable or necessary – is immediately tarred with the false slur of “appeasement”.

That, unfortunately, means that as Russian officials hold high-level talks this week with counterparts from the United States and NATO there is little chance for a diplomatic resolution to dangerous tensions.

German Chancellor Olaf Scholz is the latest target for the “appeaser” label after it was reported that his administration is looking to find a restoration of normal relations with Russia.

Separately, the US Secretary of State Antony Blinken and NATO secretary-general Jens Stoltenberg have taken a tough “anti-appeasement” line towards Russia ahead of negotiations this week.

Blinken said alleged Russian aggression “will not be tolerated” while the NATO civilian chief said the bloc would not compromise in admitting whatever nation likes to join the military alliance.

It’s quite clear that the US and its NATO allies are totally dominated by groupthink that is infested with chronic Russophobia. After a videoconference for NATO foreign ministers last Friday, Blinken gave a presser in which he accused Russia of a litany of transgressions, ranging from invading Ukraine in 2014 to poisoning former Russian spy Sergei Skripal, from interfering in US elections to complicity in war crimes in Syria.

All of the allegations of malign Russian activity are dubious and unsubstantiated. Indeed, the claims are arguably unhinged, slanderous and offensively provocative. And yet Moscow is supposed to dialogue with such people?
The abject thing is the absolute conviction with which these allegations are articulated and professed as truth.

Blinken, as with other US politicians and media pundits, as well as NATO counterparts, seems to believe their own propaganda with regard to demonizing Russia. At no point is there the slightest cognizance of NATO’s own involvement in orchestrating the 2014 coup d’état in Ukraine, an event that has created so much of the present tensions. All the other alleged Russian transgressions can be rebutted too with ample evidence. But there is no intelligent scope for a reasonable debate and argument based on facts.

Russia is purportedly guilty of all charges because the charges are formulated on the basis of Russophobia. This is ideological bigotry that is premised on deeply hostile prejudice that can be traced back to the Cold War and before.

The relentless groupthink and Russophobia as displayed by the US and its European vassals indicates that there is negligible chance of a diplomatic resolution to security tensions with Russia.

Moscow has reasonably put forward what it considers to be red lines for its national security, including the eastward expansion of NATO to include Ukraine and other former Soviet Republics, as well as the installation of strike weapons near its border.

Instead of those long-held existential concerns held by Russia being considered and responded to, the United States and its partners are upping the ante by accusing Moscow of “seeking a pretext for invading Ukraine”.

The groupthink of the US and its NATO allies and their incorrigible Russophobia ultimately mean that Russia’s legitimate security apprehensions will fall on deaf ears.

And, more disturbing, if any American or European public figure should dare to question the hostile Russophobia and propose a genuine mutual compromise then they will be vilified as an “appeaser” to Moscow.

This is a reference to the 1930s and the lead-up to World War II when British and French leaders were perceived as having acquiesced to Adolf Hitler and the aggression of Nazi Germany.

Such an argument is false and ludicrous. For a start, British and French governments in the 1930s did not “appease” Hitler. They enabled the expansionism of Nazi Germany as a way to bludgeon their real perceived geopolitical rival, the Soviet Union. British and American capital helped build the Nazi war machine, and fascism more generally, as a weapon against socialism and communism.

To insinuate that today’s Russia is somehow comparable to Nazi Germany is historically illiterate and absurd. Nonetheless, that this is the point of accusations against German Chancellor Scholz for daring to “appease” Russian leader Vladimir Putin with a proposed (and eminently reasonable) reset in relations.

What is ominous is that the false appeasement argument is wheeled out by US and European politicians and media every time they want to drum up public acceptance of war. When the American and European military wants to wage a war they usually demonize the target with false Hitler comparisons and flawed appeasement claims.

The toxic implication is that appeasing Hitler was wrong because it led to war and likewise to do so with Putin is also a mistake. But the entire argument is spurious. The Western powers did not appease Hitler, they fomented his aggression, which then after losing control had to be finally eliminated through war. And Russia is not the aggressor. It is the US and NATO.

NATO’s expansionism towards Russia is aggressive and hostile for the past 30 years since the supposed end of the Cold War. It is deplorable that the present tensions are viewed as being the fault of Russia – that is an expression of sheer Russophobia. All the while, any attempt at reasonable dialogue is shot down as “appeasement” which carries multiple insults in its falsification.

Americans are a non-serious people “playing with fire”

Does Russia Understand She Is Dealing With Lunatics?

Americans Do Not Know That January 10 Is An Important Day: Accommodation or Conflict?

Will the Washington Idiots Bring the End of the Western World in 2022?