HOME / WORLD / Pompeo ‘Happy’ to Pontificate in Tehran, Revealing US Tyranny of Arrogance

Pompeo ‘Happy’ to Pontificate in Tehran, Revealing US Tyranny of Arrogance 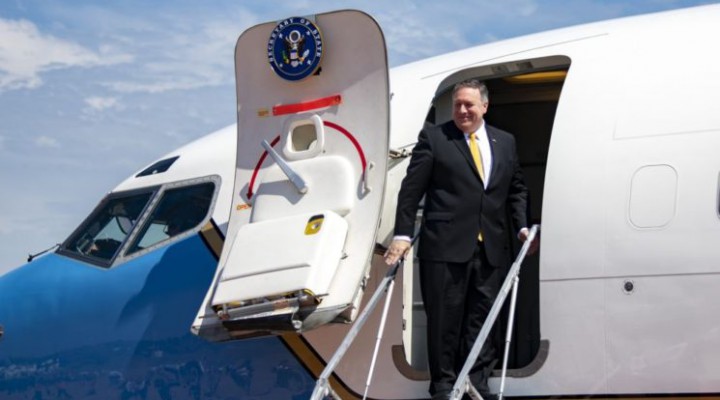 Imagine the spectacle. US Secretary of State Mike Pompeo sitting in Tehran and telling the Iranian people via a state media interview how “evil” their government is. No wonder tensions with Iran are reaching a flashpoint when Washington is so arrogant and delusional.

Last week, Pompeo told US media he was willing to go to Iran despite the Americans having no diplomatic relations with Tehran. Pompeo was not intending to suddenly meet with Iranian officials. Instead he wants a putative visit to Tehran to be an occasion to get on state media and address the Iranian people “directly”.

In response to a question about whether he was prepared to go to Tehran, the American top diplomat said: “Sure. If that’s the call, I’d happily go there… I would welcome the chance to speak directly to the Iranian people.”

“I’d like a chance to go [to Tehran], not do propaganda but speak the truth to the Iranian people about what it is their leadership has done and how it has harmed Iran,” he added.

That’s not diplomatic outreach. It is simply about seeking the chance to pontificate in Tehran. Despite claiming he would “not do propaganda”, the talking points that Pompeo would regurgitate on Iranian media would be the usual baseless slander that has become Washington’s standard depiction of Iran. A depiction that Pompeo as well as President Donald Trump have personally propagated.

Iran, according to Washington dogma, is an evil terrorist-sponsoring regime that ruthlessly represses its 80 million people, fueling conflict all over the Middle East, and secretly building nuclear weapons. Typically, the Americans never provide any evidence to substantiate their caricature of Iran. It’s merely a “truth” solidified by relentless repetition of hollow allegations. In short, propaganda.

And Pompeo wants to insult the intelligence of Iranians by being given a pulpit on Iranian state media.

By saying he wants to “speak directly” to the Iranian people, Pompeo is adverting to the real US agenda of fomenting regime change.

America’s official arrogance and hypocrisy are boundless. Every malign activity that Washington accuses Iran of can be thrown straight back at the US with manifold more accuracy of facts. The US has destroyed the Middle East with numerous criminal wars and covert regime-change operations, has sponsored terrorists as its proxies, and has fueled the danger of nuclear war by illegally arming Israel with hundreds of weapons of mass destruction.

President Trump has sinisterly alluded to potentially using WMD against Iran in recent weeks, threatening to deploy overwhelming force “to end the regime”.

Admittedly, the American president has at times said he is open to talks with the Iranian government. His “offer” is unconvincing of an intention for genuine dialogue. Trump expects Iran to come to the negotiating table in an act of surrender and self-debasement to accept his terms of “disarmament”. All the while using the threat of annihilation as a bargaining tool.

Moreover, Pompeo expressed his entitlement to lecture the Iranians and urge them to liberate themselves from a “theocratic tyranny” because, he said, the Iranian foreign minister Mohammad Javid Zarif is allowed “the freedoms of the United States to come here and spread malign propaganda”.

Pompeo was referring to an official visit to the US earlier this month by Zarif who was attending the United Nations in New York City for a diplomatic conference. All foreign diplomats have a sovereign right to attend the UN. Pompeo’s remarks indicate a presumption that the US government has dominion over the UN and international law.

The alleged “malign propaganda” that Pompeo accused Zarif of spreading was an interviewhe conducted with the NBC news channel at the Iranian ambassador’s residence. During that interview, Zarif did not unload on the litany of factually verifiable war crimes that the US is culpable of.

What Zarif said was a model of restraint and diplomacy. He said that if the US lifted crippling sanctions off Iran, then the “door is wide open” for future negotiations.

Calling for the avoidance of war, the Iranian diplomat pointed out that it was the United States, not Iran, that had undermined diplomacy by walking away from the 2015 nuclear agreement between Tehran and world powers, reported NBC.

“It is the United States that left the bargaining table. And they’re always welcome to return,” Zarif added.

What Pompeo calls “malign propaganda” many other people would view as an accurate, if restrained, telling by the Iranian diplomat of how it really is.

Given the unlawful aggression that the Trump administration is wielding against Iran in terms of economic warfare on the country’s vital oil trade and in terms of military force buildup in the Persian Gulf, including nuclear-capable B-52 bombers, what Iran is demonstrating is an immense discipline to maintain regional and world peace.

Iran’s conditions for possible negotiations are eminently reasonable. They include being respected as a sovereign nation and entering into dialogue as a mutual party where discussions can be held on the basis of facts and international law.

Pompeo’s supreme arrogance about America’s presumed exceptional entitlements and superiority are, unfortunately, a sign that Washington is incapable of being a normal state. The real “theocratic tyranny” is in Washington where it has the perverse belief that it has divine right to destroy other nations if they don’t grovel sufficiently at its feet. But those feet are made of the proverbial clay signifying a doomed power, as Iran’s dignity and defiance is revealing.

Pompeo ‘Happy’ to Pontificate in Tehran, Revealing US Tyranny of Arrogance

0 thoughts on “Pompeo ‘Happy’ to Pontificate in Tehran, Revealing US Tyranny of Arrogance”