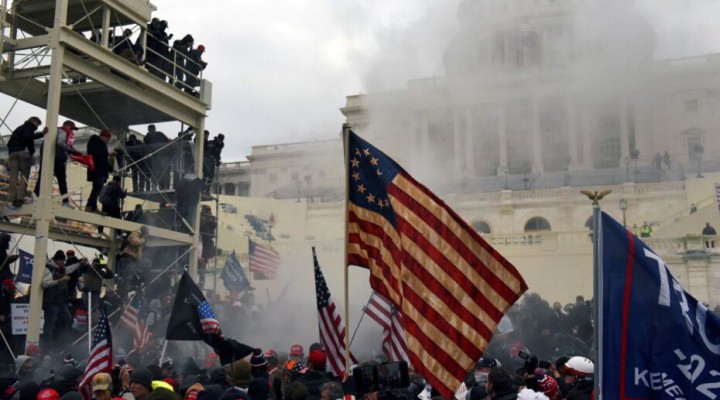 The next two weeks could see mounting violence across the US. Despite vociferous condemnations, it looks like Trump and his supporters staged a shocking assault with impunity on the political institutions… and the lights are not exactly back on.

Astounding scenes of chaos and mob-rule saw the American seat of government brought to a standstill this week as Congressional lawmakers ran for cover in secure locations while police officers kept Trump supporters at bay with guns raised.

Disturbingly, Trump and his supporters celebrated the moment as a “patriotic act”.

Reaction from world leaders was one of shock that American politics descended into deadly violence in the heart of Washington DC. Not only that but the man behind the fiasco was President Donald Trump. His reckless, incendiary words are linked directly to the temporary sacking of US government. It was an attempted coup d’état.

American democracy is often extolled as a “shining city on the hill” offering a “beacon of hope” to the rest of the world. In that case, the lights went out after thousands of Trump supporters forced their way into the iconic Capitol building, smashing windows and scaling facades. Four people were killed in the melee, one a woman reportedly from police gunshot wounds and the others from medical emergencies.

Dozens of protesters were arrested over the disturbances which President-elect Joe Biden and several lawmakers condemned as an “assault on democracy”. Congress was suspended for several hours as the National Guard and other law-enforcement agencies brought the Capitol building under control. Lawmakers later resumed the business of certifying the election results which sealed Biden’s victory in the November 3 presidential ballot.

The siege of the Capitol began soon after lawmakers from the Senate and House of Representatives began the constitutional process of tallying the Electoral College votes that been awarded on December 14 to Biden and incumbent President Donald Trump. Biden won by a clear majority but some Republican lawmakers vowed to overturn the votes this week in Congress.

On the same day prior to the joint session of both legislative chambers, Trump delivered yet another barnstorming speech urging his followers to fight like hell and never to concede. He has defiantly claimed that Democrat candidate Biden only won by defrauding votes and that the election was rigged. Trump’s speech Wednesday actually called on supporters to assail the Capitol to disrupt the electoral process. He later was forced into issuing a call for protesters to “return home”, but nevertheless referred to them as “patriots”.

There are now bipartisan calls for Trump to be removed from office under the 25th Amendment of the Constitution which permits his sacking by his Cabinet or by Congress if he is deemed unfit for duties. But the amendment has never been invoked before and it’s unclear how it would be applied or how long it would take for the measure to be implemented.

Trump appears to be now conceding there will be a peaceful transfer of power. But there are two more weeks in office before Biden’s inauguration as president on January 20. There is still a lot of scope for Trump to unleash the kind of mayhem seen this week.

The lights may have gone out temporarily this week in the Shining City on the Hill. But who’s to say they won’t go out again, plunging American politics into a prolonged darkness?

For one thing, Trump’s foot-soldiers feel emboldened by the extraordinary events. They have a president who brazenly persists in the Big Lie that the election was rigged. No evidence has been presented to back up the wild claims. The courts have dismissed as baseless every attempt at litigation by the Trump campaign. Indeed, Trump’s attorneys Rudi Giuliani and Sidney Powell have appeared like laughing stocks from their incompetent conspiracy peddling.

But such is the phenomenal breakdown in American politics, the fact is millions of Trump supporters actually, truly believe that he won the election by a landslide, and that Biden is taking office through a coup against the democratic will of the people, aided and abetted by the Deep State and its corporate “fake news” media.

Closer to the truth, Trump and his diehard cronies tried to instigate a coup. His unleashing of mobs to assault the political process is that of a fascist demagogue.

There are alarming questions over how this rampage was allowed to happen.

How was it that thousands of Trump supporters were able to easily overwhelm security guards at the Capitol? The heart of US government was evidently lightly policed and helpless in staving off the crowds who pushed aside security fences. Why did it take several hours for the National Guard and other security services to rout the crowds from government chambers and offices? Many of the protesters seemed to be unconcerned about being arrested.

Media reports say some 52 arrests were made. That’s out of thousands of marauding protesters who forcibly breached the Capitol. One was fatally shot by police officers. But the relatively low numbers of detentions suggest that Trump supporters have a lot of sympathy among the security forces.

One can be sure that if a similar invasion of the Capitol had been attempted by Black Lives Matter protesters or leftwing anti-war groups, there would have been wholesale lethal shootings by law-enforcement officers resulting in multiple deaths.

The next two weeks could see mounting violence across the US. Despite vociferous condemnations, it looks like he and his supporters staged a shocking assault with impunity on the political institutions… and the lights are not exactly back on. They’re flickering.

Trump vs. The Establishment