HOME / Multimedia / John Pilger: The US is Escalating War Tensions With China in Desperate Bid to Maintain Global Power 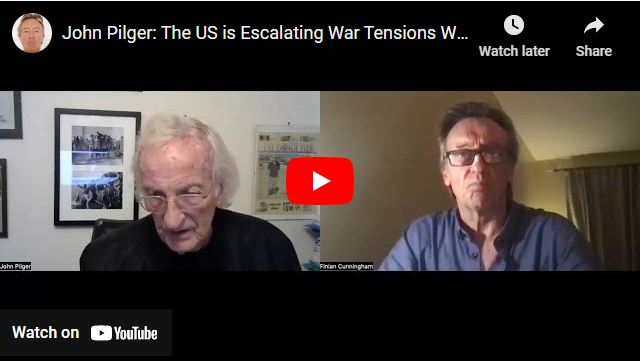 In an interview with Finian Cunningham, internationally renowned journalist and documentary filmmaker John Pilger says America is driving war against China, not out of strength but rather from a fear of losing its erstwhile sole superpower position.

The driving forces are multiple: the United States’ sense of itself as a diminishing global power; the destructive militarism of US capitalism and its “Merchants of Death”; deep-seated historical racism towards China; and an anachronistic American notion of “divine right” to dominate the rest of the globe.

China is not an intrinsic military threat to the US. It certainly is a challenge to the United States’ so-called “rules-based order” – which is a euphemism for American domination. Beijing has continually appealed to the US to embrace multipolar respect and abandon its Cold War mentality. Yet Washington persists in asserting that China is its biggest long-term threat. The real “threat” is that China’s economic ascent and phenomenal developmental success are exposing the bankruptcy of American capitalism.

Tragically, the European Union seems to be going along with the US’ belligerent flow towards China. Although, has German Chancellor Olaf Scholz come to his senses recently after visiting Beijing to meet Chinese President Xi Jinping?

John Pilger warns that if the US does not come to terms with the reality of a multipolar world and the genuine equality of nations (as the US professes) then armed conflict with China is on the cards. He also discusses how Taiwan is being cynically used by the US as a provocation towards China by massively arming the island territory and undermining Beijing’s sovereignty. He compares this situation with how Ukraine had been weaponized by the US and NATO over the past eight years in order to antagonize Russia.

What is Behind the Growing US-China Crisis Over Taiwan?

0 thoughts on “John Pilger: The US is Escalating War Tensions With China in Desperate Bid to Maintain Global Power”