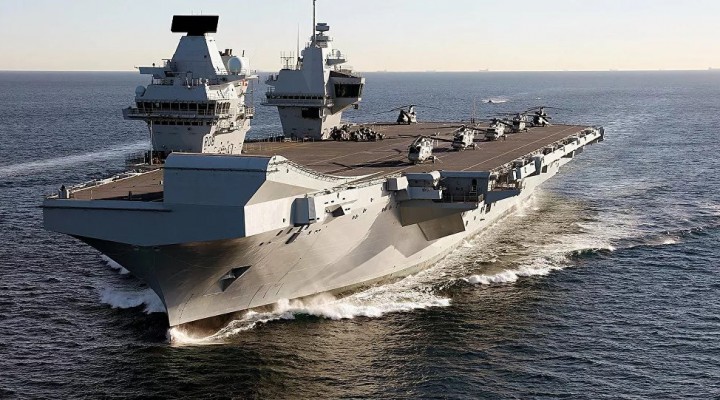 Britain’s spanking new aircraft carrier and its accompanying battle group have run into trouble early into their Asia-Pacific voyage – at least 100 members of the crew have been infected with Covid-19.

The HMS Queen Elizabeth aircraft carrier, accompanied by at least six warships and a submarine, is sailing through the Indian Ocean on its way to the Pacific. The carrier strike group is only a quarter way through its 28-week deployment but now the infected crew is reportedly having to self-isolate.

British naval officials are asserting that the sickness on board will not impair “operational effectiveness”. But you do wonder how social distancing in confined conditions will make normal duties feasible. It wouldn’t be the first time that a British warship and indeed an American one were forced to cancel voyages due to outbreaks of Covid-19 among crews.

Given that the British flotilla is incubating Covid-19 and is due to dock in up to 40 countries during its 42,000-kilometer itinerary that also raises questions about the sanity of the mission. Spreading disease around the world? That gives a new meaning to carrier strike group!

© AP PHOTO
A naval officer looks up at the white ensign flying at the stern of the aircraft carrier HMS Queen Elizabeth, which has been beset with technical problems

HMS Queen Elizabeth cost at least $4 billion to build and is described as the “flagship” of the British navy. At 280-meter length, it’s believed to be one of the largest vessels of its type anywhere in the world, entering into service last year. As well as accompanying warships, it is also capable of launching dozens of F-35 fighter jets and helicopters.

A naive but unintentionally helpful headline was asked by the BBC. “Why is a UK aircraft carrier on a world tour?”

Well, exactly. What is the point of this display of military power? The cost of it alone is embarrassing considering the financially over-stretched public health services in Britain trying to cope with the Covid-19 crisis. A crisis that threatens to rebound from new deadly variants of the virus.

The naval mission is a vanity exercise to advertise “Global Britain” – the jingoistic British notion egged on by the likes of Boris Johnson that  Britain has rediscovered past glories as an empire now that it has quit the European Union.

Ordering its expensive tub-boats to sail around the world is Britain’s way of trying to project itself as a global power to be taken notice of.

Hence, a few weeks after setting sail in May, the British battle group dispatched a destroyer, HMS Defender, to peel off from the convoy in the Mediterranean and enter the Black Sea where it provoked Russia’s anger by breaching territorial waters off the Crimean Peninsula.

Next up, the strike group is reportedly going to launch fighter jets to bomb targets in Iraq allegedly belonging to Islamic State militants.

Then after flinging bombs into Iraq, the British navy heads to the big arena of the South China Sea for what it calls a “freedom of navigation operation”. That is just a euphemism for gratuitously provoking China from sending a military expedition close to territories claimed by Beijing. That itinerary could transpire in a dangerous confrontation with China.

Along the way, the British “Rule Britannia” fleet will call in former British colonies such as Oman, India and Singapore. These stopovers are no doubt aimed at reviving memories of Britain’s supposed past glories as a colonial power when in reality the “glory” stemmed from subjugating a large portion of the Earth to wars and rapacious exploitation.

Today, Britain is a sick place, literally and metaphorically. The atrocious racist and jingoistic behaviour of its football fans as seen during the recent Euro Championship is not a minority blemish. The whole British establishment is infected with the disease of imperialist arrogance.

Despite being ravaged by the Covid pandemic, the British rulers have other perverse priorities. They want to flex military muscle to make a decrepit nation look virile and powerful. In doing that they are willing to neglect urgent social needs among their population while sailing around the world spoiling for confrontation with other nations in a reckless display of aggression. And, to boot, ferrying infections towards distant shores.

Now, that’s what the HMS Queen Elizabeth really stands for: a flagship of British disease.

0 thoughts on “Flagship of British Disease”