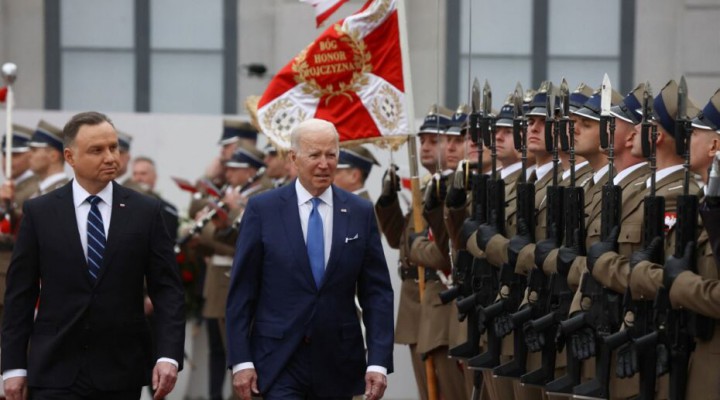 After Biden’s charade-busting admission it will be difficult politically to maintain US-European “unity” over such a flagrant imperial agenda.

U.S. President Joe Biden came to Europe last week riding high on European deference towards America’s leadership. Then he went to Warsaw to make a victory lap speech at the weekend which was billed as marking the high point in galvanizing European and NATO unity towards Russia.

But the climax cratered like a house of cards. As the president was boarding Air Force One to take him home, the much-vaunted transatlantic unity was in disarray from Biden’s cack-handed big moment.

It reminds one of former President Barack Obama’s cautionary words in appraising Biden. “Never underestimate Joe’s ability to fuck things up,” said Obama of his former vice president and his gaffe-prone big mouth.

Biden’s speech in Warsaw was a carefully crafted rousing one. It was of course littered with mangled words as is Biden’s rambling style, and laden with the usual banal American arrogance about leading the free world against evil dictators. Nevertheless, he also appeared to succeed in rallying the unity of the U.S. and its allies in facing down alleged Russian aggression. That unity certainly seemed remarkable with regard to NATO’s and the European Union’s response to Russia’s military intervention in Ukraine. The Europeans have ratcheted up economic sanctions against Russia at the behest of Washington; they are buying up U.S. weapons and set to import American energy instead of Russian.

It was all going swimmingly well until the very end of the speech when Biden suddenly went off script and, referring to Russian President Vladimir Putin, declared: “For God’s sake, this man cannot remain in power.”

There it is. Regime change, according to Biden. European allies have recoiled in embarrassment over the clumsy admission. Britain, France, Germany and the European Union have all said they repudiate the objective. The distancing from Washington is not so much out of principle but rather out of the bad political look.

After weeks of an intense Western media campaign projecting the policy as supposedly defending Ukraine (and European democracy), the U.S. president was letting it be known that the real endgame is regime change in Moscow.

Just like the Biden order to pull out from Afghanistan last year, the European leaders are left looking like bystanders at a bus stop. Washington calls the shots without even the pretense of consulting its vassals.

At the end of a European tour deemed up to that point to be a stunning success for the American president owing to the fawning deference he was shown days before, and just at the very end of a set-piece address choreographed for the history books, Joe Biden blew it.

The White House immediately swung into damage-limitation mode, urgently clarifying that the president did not actually mean regime change. Biden himself denied that he was referring to regime change when he got back to the U.S. But even sycophantic news outlets admitted the difficulty in trying to spin any other literal meaning.

Biden’s knack for putting his foot in his mouth has been around for a long time during 50 years as a politician. It can’t be simply explained as a sign of senility although the recent frequency of gaffes suggests his mental acuity is waning with his 79-year-old age. During his first year-and-half as 46th president, administration aides have countless times had to clean up sloppy remarks. In one notorious clanger, he appeared to repudiate Washington’s decades-old One China Policy, saying the U.S. would militarily defend Taiwan in the event of an invasion from the mainland.

The laugh is Biden touts himself as a “foreign policy expert” from his many years as a Senator and roving ambassador before he entered the White House, first as vice president under Obama and now as the president.

If this is American expertise, then what does incompetence look like? At a time of extremely sensitive U.S.-Russian relations, Biden has called Putin “a killer” and “war criminal”. On the weekend before his regime-change manifesto was announced, he labeled the Russian president a “butcher” and compared the Kremlin with the Third Reich.

The hypocrisy of Biden is bad enough. He has endorsed endless criminal U.S. wars and regime-change operations that have resulted in millions of deaths and whole nations destroyed. For Biden to call anyone a war criminal and butcher is too nauseating for irony.

But it is contemptible that the Ukraine conflict is reduced by Biden to simplistic caricatures in total denial of how the U.S.-led NATO alliance has largely created the confrontation with Russia.

Biden’s Secretary of State Antony Blinken was among the damage-limitation squad over the weekend’s incendiary remarks. Blinken had the temerity to say: “We don’t have a strategy of regime change in Russia or anywhere else.” That’s from Blinken who helped engineer the regime-change wars in Libya and Syria while Biden was vice president.

The Ukraine conflict is only a part of a bigger picture of U.S. hostility towards Russia. Washington and its European minions have tried to portray NATO’s eastward expansion over the years as an innocent development of a defensive nature.

Moscow has repeatedly denounced NATO’s stance as aggressive and an existential threat to Russian national security. When the Kremlin proposed a security treaty at the end of last year, it was rebuffed by Washington and NATO. That inevitably led to the war in Ukraine as a defensive counter-measure by Russia.

Biden just ripped off the wrapping on the policy. In one fell swoop, he just proved what Russia has been saying. His admission of regime change against Russia is an admission of violating the UN Charter and international law. The European leaders are aghast not because they are against such criminality. Their concern is that they too are exposed as being complicit in a criminal conspiracy. They fear how their public will react to that imperial agenda. Is this what economic sanctions and resulting energy price inflation are for?

Good old Joe, screwing it up – again. Just when Uncle Sam had the Europeans corralled under supposed American leadership, the imperial agenda blows up in their face.

This also explains why the Zelensky regime in Kiev is procrastinating and avoiding political settlement of the conflict. Settlement is not in Washington’s interest. It wants the proxy war to continue because the real aim is to use Ukraine as a cat’s paw to destabilize Russia. Zelensky and Kiev can’t make the peace because that’s not what their handlers in Washington are after. Washington wants and needs permanent tensions and conflict (short of all-out war) with Russia.

After Biden’s charade-busting admission, however, it will be difficult politically to maintain US-European “unity” over such a flagrant imperial agenda.

On Ukraine, Biden’s State of the Union address was just ‘good vs. evil’