HOME / Economy / Nuclear War vs. Belt and Road Initiative: Why China Will Prevail 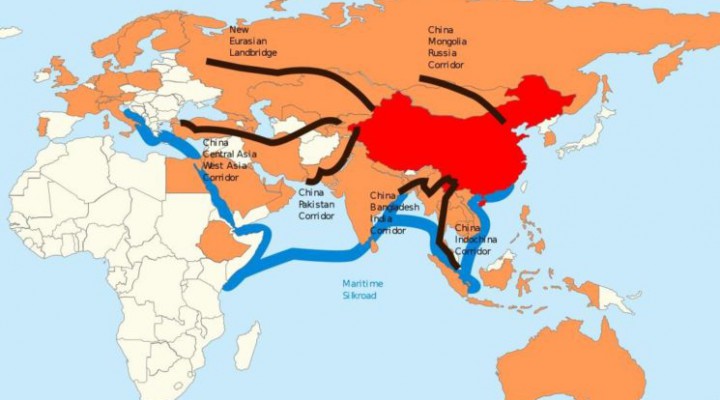 The global trend in international relations is often difficult to discern. But one can be helped in this task by looking at two events, organized in Washington and Beijing, comparing the different themes, participants, objectives, and broached for discussion. After all, we are talking about the two largest economies in the world, two colossi directing and shaping global culture, behavior and world opinion.

The last few weeks have offered the international community an opportunity to reflect. Two events took place in Washington and Beijing that, in terms of impact, depth, participation and issues discussed, are striking contrasts.

In Beijing at the Belt and Road Forum over 40 world leaders discussed the Belt and Road Initiative (BRI), a project that will transform the entire Eurasian continent, improving free trade between dozens of countries by investing in transport infrastructure as well as in energy and technological cooperation. The leader of this silent industrial revolution is China’s Xi Jinping, casting ancient ambitions and perspectives into the new millennium, anxious to once again acquire the leading role in global civilization.

The BRI is a gigantic project that will continue to expand in the years to come and at the rate the current technology allows, while of course remaining cognizant of the needs of the countries involved in the Chinese project. The numbers of participants at Beijing’s BRI event are astonishing, with more than 5,000 delegates, 37 heads of state (including that of G7 member Italy), and 10 of the most important members of ASEAN. A hundred and twenty-five countries have signed intentions to cooperate grand project, and 30 organizations have ratified 170 agreements that total a projected investment by the People’s Bank of China of over 1.3 trillion dollars from 2013 to 2027. This is what Robin Xing, Morgan Stanley’s Chief China Economist said:

“China’s investment in B&R countries will increase by 14% annually over the next two years, and the total investment amount could double to $1.2-1.3 trillion by 2027.”

It is a revolutionary project that will characterize the next few decades if not centuries. It will offer a stark contrast to the American drive for hegemonic domination by demonstrating the capacity of humanity to overcome conflicts and wars through cooperation and shared prosperity.

Washington is left demanding loyalty in exchange for nothing (but with Donald Trump, even this little is uncertain). Unable to inflict damage on Russia and China, the US focuses on pressuring her European allies through a trade war of duties, tariffs, technological bans ( Huawei’s 5G) and sanctions (against Iran and European banks) in order to favor US companies.

Reflecting the moral of Aesop’s fable “The North Wind and the Sun”, Beijing behaves in the opposite manner, offering in the BRI project win-win cooperation and the benefits that accrue from this. The project tends to improve people’s living standards through the huge loans extended to improve such basic infrastructure as railways, schools, roads, aqueducts, bridges, ports, internet connectivity and hospitals. Beijing aims to create a sustainable system whereby dozens of countries cooperate with each other for the collective benefit of their people.

The Eurasian continent has struggled over the last few decades to attain the same level of wealth as the West as a result of wars of aggression and economic terrorism committed by countries in search of a utopian global hegemony.

The Chinese initiative aims to offer to all the countries involved equal opportunities for development based not on military and/or economic power but on a real capacity to improve the well-being of all parties involved.

As Asia Times explained in an excellent article on Beijing’s most recent BRI forum:

“BRI is now supported by no less than 126 states and territories, plus a host of international organizations. This is the new, truthful, realistic face of the “international community” – bigger, more diversified and more representative than the G20.”

This Chinese initiative could have only taken place in a post-unipolar world with multiple centers of power. Washington is perfectly aware of the changes that have occurred over the last 10 years, and the accompanying change in attitude of policy makers can be seen in the drafting of two documents that are fundamental for every US administration, namely, the Nuclear Posture Review (NPR) and the National Defense Strategy (NDS).

These two documents explain how the United States sees the world and what it intends to do to fight the emerging multipolar world order. Compared to Obama and his administration, Trump, Bolton and Pompeo are more anchored to the current reality, understanding well that Russia and China are their equal militarily. Obama, of course, infamously dismissed Russia as a regional power no more than five years ago.

Trump cannot afford a conflict with Venezuela, Iran or North Korea, whether militarily or politically. In the case of Venezuela, Colombia and Brazil do not seem too keen on sacrificing themselves on behalf of Washington; and there are no jihadists to arm and launch against defenseless civilians as happened in the Middle East, so there is no force in the field capable of defeating a strongly patriotic nation dedicated to resisting US imperialism. Attacking Iran would result in a devastating Iranian response targeting US troops deployed in dozens of bases scattered throughout the Middle East and inflicting losses that would be too costly for Washington, making any gains made pyrrhic. As for North Korea, Kim cannot be touched thanks to nuclear deterrence.

What remains for Trump and his neocons are empty threats of war, documents declaring Russia and China as opponents to be defeated, and a great deal of war propaganda for the purposes of filling up the coffers of US arms manufacturers.

And now we come to the event organized in Washington as Beijing was busy discussing how to revolutionize three-quarters of the globe. The Brookings Institute, a think tank, organized a meeting that lasted several hours to discuss “The future of US extended deterrence“, focussing on the tools needed to deal with an attack from America’s opponents.

Anyone who has any experience with such conferences knows that it is often companies linked to the arms industry that fund such events, thereby encouraging speakers, guests and politicians to take a very hawkish line for the purposes of scaring the population into justifying an increase in arms spending.

This is exactly what happened at the event organized by Brookings, where the Deputy Undersecretary of Defense from the Trump administration, David Trachtenberg, explained to the audience how the US nuclear deterrent is now coming to the end of its life cycle after a period of 30, 40 or 50 years. The Undersecretary did not mention the overall figure that would be needed to modernize Washington’s entire nuclear triad (estimates put the figure at around a trillion dollars) and preferred instead to speak about a general increase in the defense budget of $60-70 billion dollars to begin to address the problems.

Often the numbers do not prove everything but are nevertheless useful in helping us better understand certain events. Former US President Jimmy Carter provided a useful explanation for how the Chinese came to surpass the United States:

“The US is the most warlike nation in the world, forcing other countries to adopt our American principles. How many miles of high-speed railroads do we have in this country? China has around 18,000 miles (29,000 km) of high speed rail lines while the US has wasted, I think, $3 trillion on military spending; it’s more than you can imagine. China has not wasted a single penny on war, and that’s why they’re ahead of us. I think the difference is if you take $3 trillion and put it in American infrastructure, you’d probably have $2 trillion leftover; we’d have high-speed railroads that are maintained properly. Our education system would be as good as that of, say, South Korea or Hong Kong.”

Washington pressures its allies to join in seeking to damage Washington’s adversaries but ends up pushing allies and opponents closer together, as occurred when it walked away from the JCPOA (Joint Comprehensive Plan of Action) agreement with Iran while the Europeans remained committed to it. Washington may be able to lean on European allies for the time being, but with the vast BRI project increasingly attracting the attention of Europeans, these days may be numbered, especially with the BRI project bringing the prospect of doing away with the US dollar as a reserve currency necessary for trade between countries.

Trump and his administration are acting in a multipolar context as if they are still in a unipolar one, behaving like a hegemonic superpower that does not care about the consequences of its actions, even against allies. This arrogant attitude will come back to bite the United States, not only undermining its economy but also the viability of the US dollar remaining as the global reserve currency.

By Trump behaving like a bull in a china shop, friends and enemies alike are forced to seek ways to counterbalance the United States economically and militarily. Of course Europe still remains subservient to the US, but other countries not in Washington’s good books seem to have understood the historical period we are going through, preferring dialogue and balancing between powers (a typical example being Erdogan’s Turkey, which is in neither camp but uses both for its own purposes) rather than an absolute declaration of loyalty to one side or the other.

China and Russia are perfectly comfortable operating in today’s fluid geopolitical environment, as this gives them the opportunity to offer countries resisting Washington’s hegemony the military and economic means to persevere and eventually prevail. It is an extremely effective strategy as it places before Washington red lines that cannot be crossed, reducing or eliminating the possibility of a new conflict (something that perhaps even Trump basically appreciates, given that this remains the last election promise that he has not yet broken).

Observing these two conferences held in Beijing and Washington within a week of each other, with their contrasting emphases, only highlights the differences between these two countries. On one side, China seeks integration, cooperation and development for the collective benefit of almost three billion people. On the other side, we see the US discussing the modernization of its nuclear triad, whose only contribution to humanity is its ability to wipe it out, only there to bully and intimidate those not prepared to kowtow to Washington’s diktats.

0 thoughts on “Nuclear War vs. Belt and Road Initiative: Why China Will Prevail”