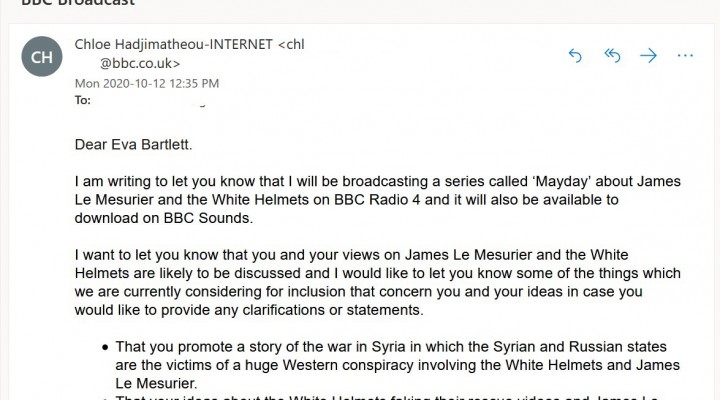 The British state-funded BBC, which has a history of perverted war  propaganda against the people of Syria, a history of whitewashing the  crimes of terrorists in Syria, a history of flat out lying about events  in Syria, has decided to launch another smear against myself, Vanessa Beeley, researchers of the Working Group on Syria, a former ambassador to Syria, and others.

This is not just another character assassination, though, this is a serious threat against journalists and those speaking truth against establishment narratives. Thanks to those who have tweeted or spoken about this revolting attack.

Youtube channel, The Convo Couch, put out a report yesterday on the issue.

Vanessa Beeley spoke on UK Column News about the matter.

And others on social media have expressed exceptional support to the journalists, academics and others targeted in the pending smear.

Following is the hostile, journalistic integrity-devoid email sent to me by a British state-funded hack (who is such a cowardly hack she hides her Twitter feed).

Since I frankly neither expect Chloe/the BBC to republish the entirety of any reply I give them, I’ll paste here the basic reply I sent–which I would elaborate on in depth were I to receive the BBC’s word that they would publish my full reply in full.

You asked for a clarification or comment to your hostile email to me, yet you did not make clear whether you would publish in full my reply.

If you do not do this as requested, I will say I attempted to meet your request for replies but you declined to publish in full.

Kindly let me know whether you intend to follow professional standards and include my full reply, which I will send depending on your reply.

For the record: my travels to and around Syria, and elsewhere, are at my expense and supported by those who have followed my journalism for years, or even more than a decade. I am not funded by any government (but you are, aren’t you, working for British state-funded media). If you or the BBC publish anything insinuating that I receive funding from any government, I will seek legal counsel.

My writings for RT are mine alone: I pitch opinion articles to them on a per piece basis as an independent freelancer.

However, you seem to be unaware that I, as a freelancer, contribute to/have contributed to a number of other platforms, including Mint Press News, Oriental Review, Dissident Voice, Inter Press Services, and a host of others all detailed on my blog. It is completely disingenuous of you to imply my writing is anything other than my own views, and it is libellous of you.

In the mean time, feel free to peruse my bio, it is quite extensive, with on the ground experience from Palestine to Syria, to eastern Ukraine. And in fact, my journalism has not only won the support of countless readers online, but also merited being awarded by the Mexican Press Club in 2017 and being shortlisted for the Martha Gellhorn Prize for Journalism that same year.

By the way, my support has increased exponentially even prior to you/the BBC running a character assassination piece on me, as people became aware of your intentions.

I have my own questions for you:

Have you ever entered Syria illegally? If so, how many times?

How can you justify turning a blind eye to the fact that countless White Helmets members have openly expressed support to terrorist groups in Syria, let alone been members of said groups, holding weapons, standing on the bodies of dead Syrians? Can you honestly claim you were unaware of these facts?

How do you explain the presence, throughout Syria, of White Helmets headquarters next to or in close proximity to headquarters of al-Qaeda in Syria, Faylaq al-Rahman, Nour al-Din al-Zenki, and other terrorist groups? How can the White Helmets be deemed as neutral when working side by side these terrorist factions?

P.S. Why does a prominent and published journalist with the BBC feel the need to hide her tweets? What are you afraid of the public seeing? Do you feel this is professional of a journalist to hide their Twitter output, and indeed much of their identity?

Chloe sent a similar but more detailed email to Vanessa Beeley, which Vanessa deconstructed at length on Twitter.

Chloe also previously harassed members of the Working Group on Syria,  Propaganda and Media–the group of academics and researchers whose scrutiny into the alleged Douma chemical attack led to the initial OPCW whistleblowers to speak out (long before others belatedly chased those leaks).

In a meticulously-compiled report exposing Chloe’s whitewashing details around the alleged Douma chemical attack, the Working Group detail the nature of the correspondence (harassment) from her/the BBC.

Since the loaded questions in her hostile email take issue with my perspective and reporting on the White Helmets, I detail below my reports which address issues pertaining to the White Helmets and their crimes against Syrian civilians.

Decision to bring White Helmets to Canada dangerous and criminal

Syria War Diary: What Life Is Like Under ‘Moderate’ ‘Rebel’ Rule

Regarding the boy in the ambulance (Omran Daqneesh), I met him and interviewed his father in mid 2017.

The BBC, on the other hand, repeatedly purveyed the lies & war  propaganda that Russia/Syria had airstruck his home. Fake news.

However, my writing on Syria is not *only* on the White Helmets. In fact, most of it is on the suffering of civilians under terrorist rule or attacks, something the BBC and other Western corporate or state-funded media actively ignore, but which I have been doing since 2014.

Where is the West’s compassion & condemnation following terror attacks in Middle East?

In Aleppo, US and Saudi-Backed Rebels Targeted ‘Every Syrian’

Hadar: A Village Under Siege by Syrian Rebels and Israeli Forces Alike

Mhardeh: A Call from a Martyred Christian Town for Syria’s Full Liberation

US-Backed Terrorism in Syria: A First-Hand Account of the Use of Mortars Against Civilians – Global Research

SYRIA: The Children of Kafarya and Foua are Crying in the Dark – 21st Century Wire

…and aside from that, my writing focuses on the war propaganda of British and other Western state-funded media like the BBC [tweet]:

“In April 2014, after an elementary school was mortared by terrorists east of Damascus, killing one child, the BBC later reported, “the government is also accused of launching them into neighborhoods under its control.” On a recent social media post, I noted this deceitful journalism, and the BBC could have easily learned about the trajectory of mortars and from where the mortar in question could only have come: the “moderates” east of Damascus.” –From: Absurdities of Syrian war propaganda — RT Op-ed

Or the repeated accusations against Syria:

Сorporate media continues to recycle accusations of starvation, chemical weapons, and more, in the propaganda war on Syria.

and years of NATO propaganda:

Deconstructing the NATO Narrative on Syria

Or the Guardian’s whitewashing of terrorists in Syria:

or the Guardian’s giving a platform to terrorist propaganda:

Guardian, Atlantic contributor acts as a Syrian terrorist mouthpiece on Twitter, and if you don’t…

Exploitation of Bana al-Abed: Parents use child to whitewash terrorists in Aleppo

or the ad nauseam repetition of war propaganda, from Aleppo to eastern Ghouta

‘They know that we know they are liars, they keep lying’

My reporting from around Syria over the years was funded by myself, unlike Western-funded media operatives who lie about Syria, and has included a great deal of personal risk from mortars and terrorist snipers.

For example, when I went to the state hospital in Dara’a, the city was being mortared by terrorists. Getting to the hospital involved shooting down a road (in a taxi) with terrorist snipers 100 m away. Much of the hospital was destroyed or inaccessible.

Al-Qaeda’s rescuers never speak of their buddies’ bombs on Dara’a streets, including the day I visited in May 2018. Dara’a hospital is battered from their “freedom” bombs and is extremely dangerous to get to, due to snipers. Nope, just hysterical accusations, as per norm.

Or standing on Castello Road (without body armour) when it was repeatedly mortared by terrorists in November 2016. https://mintpressnews.com/aleppo-how-us-saudi-backed-rebels-target-every-syrian/222594/

or like leaving Aleppo via Castello when the road was being mortared by terrorist factions, in August 2016 [videos]

In closing: any questions on my credentials, read here and decide for yourself: https://ingaza.wordpress.com/about-me/