HOME / SOCIAL/CULTURAL / TYT, Jimmy Dore, And Other Notes From The Edge Of The Narrative Matrix 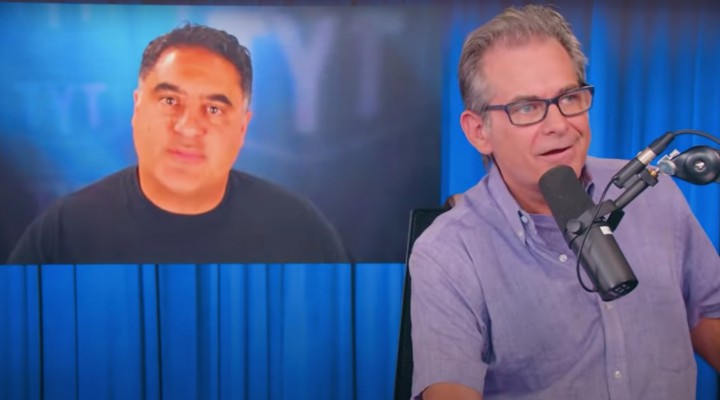 Nothing about America changed in any meaningful way after Trump took office or after he left. An oligarchic empire kept doing the things the oligarchs and imperialists had always planned on doing. All that changed were the narratives laid on top of this very boring reality.

What actually changed? The tweets. The punditry. The levels of pundit-manufactured hysteria on each side. Nothing real and significant in terms of actual government policy and behavior. The powerful capitalize on people’s inability to distinguish narrative from reality.

Imagine being an influential pundit and telling your audience on no basis whatsoever that an award-winning journalist is working for dictators and paid by the Russians, refusing to retract or apologize, and then constantly playing the victim. pic.twitter.com/lfFekCWck6

I keep seeing people say things like “This feud is destroying the left!” Alright, first of all, no it isn’t, that’s stupid. Secondly, even if it was, no “left” that tolerates the use of disgusting McCarthyite smear tactics to marginalize important anti-imperialist journalists would be worth saving.

I mean imagine a different timeline where The Young Turks had said Aaron Maté is paid by the Russian government and working for dictators, and nothing happened? Imagine if that had caused no controversy at all and everyone had just let that slide on through? How much worse would that have been? Imagine if people in online US media circles had just gone “Yep, yeah, that’s how we behave now”, and it became normal and acceptable for unprincipled progressive media outlets to target Maté and other anti-imperialist voices with that smear? Would you have preferred that?

Now imagine another timeline where instead of this becoming a contentious issue where those on one side try to blackmail the other into silence and half of lefty media takes the side of the blackmailing McCarthyites, everyone had just condemned the smearers from the start? How much better would that have been?

Jimmy Dore is popular because he’s passionate, interesting, and speaks to ordinary people across the political spectrum instead of just to pseudo progressives or elitist university Marxists. Getting upset about his popularity instead of just doing what he’s doing is pretty silly.

Part of the widespread vitriol toward Dore is due to jealousy about his popularity and influence, and part is due to a belief that he’s the wrong kind of voice to be leading the left. But in both cases the solution is to just do the thing that makes him so popular and influential yourself, not to bitch and moan while continuing your failed approach. I’m always seeing people talk about how their dad hates both parties and just discovered Jimmy Dore and loves him or whatever. What are Dore’s haters doing to appeal to ordinary disenfranchised working class people like this? They’ll say they want to, but their actions and methods say otherwise.

And if you can’t do what Dore has done to become so popular—appealing to ordinary people in an interesting and accessible way—you should probably rethink getting into the left political commentary thing anyway.

We want a smart audience, not a dumb one. So, if you can't tell that a dictator like Assad didn't win an election with 95% of the vote, don't watch our show. You won't understand it. Watch a deranged clown and a "serious journalist" discuss their feelings for weeks on end.

“How come you always criticize America instead of your own government?”

The US staged repeated coups in Australia to ensure we remain a continent-sized military base for imperialist agendas in Asia and they’re jailing Assange with impunity. Washington is my own government.

Manipulators can only project. They don’t have the imagination or empathy to create something out of whole cloth to say about you, which is great because all you have to do is listen carefully to what they say about others with the realization they are just telling on themselves.

In order to really say something that is true and meaningful about someone else’s character, you have to have the ability to lean in with empathy to understand them. People who have spent their lives manipulating others rather than working with them, don’t have empathy.

This is good to know about yourself too. If you are ever stuck hating on someone and you know it’s petty and it’s not helping you, try reversing what you see in them and see if it’s just something that you do too, something that needs to be seen, loved, listened to and let go of.

These things are sneaky though. Obviously it’s not going to present in you the exact same way as you hate it in others or else you would immediately see your own hypocrisy. They will take a little coaxing and a lot of love to draw out. Make sure you feel safe and do it by yourself. Then, when you’re feeling comfy, identify what you suspect is the core motivation of the behavior you see in the person that you hate. All it takes then is to get honest with yourself about if that motivates you sometimes.

Be real playful and gentle about it. Most of the time, that’s all it takes. Just an “Ah, yeah I do do that,” and that’s usually enough to stop your reactiveness. Even if you do do it again, you will be watching yourself more closely and collecting more data. Once it’s fully seen, it will leave by itself. And you might continue hating that person, that’s cool, but it’s those kinds of hypocrisies that we hide from ourselves that cause a lot of psychological distress and prevent you from seeing yourself and the world as it is, and not through a veil of dissociation and self-hate.

If you’ve looked and looked and you still can’t find it, then that’s fine. Some people really are just assholes and they need to wake up to themselves, nothing to do with you. Always worth doing the work on yourself first though. You’re the only asshole you can actually change.

The Young Turks Only Covered Syria To Attack Anti-War Journalism

0 thoughts on “TYT, Jimmy Dore, And Other Notes From The Edge Of The Narrative Matrix”